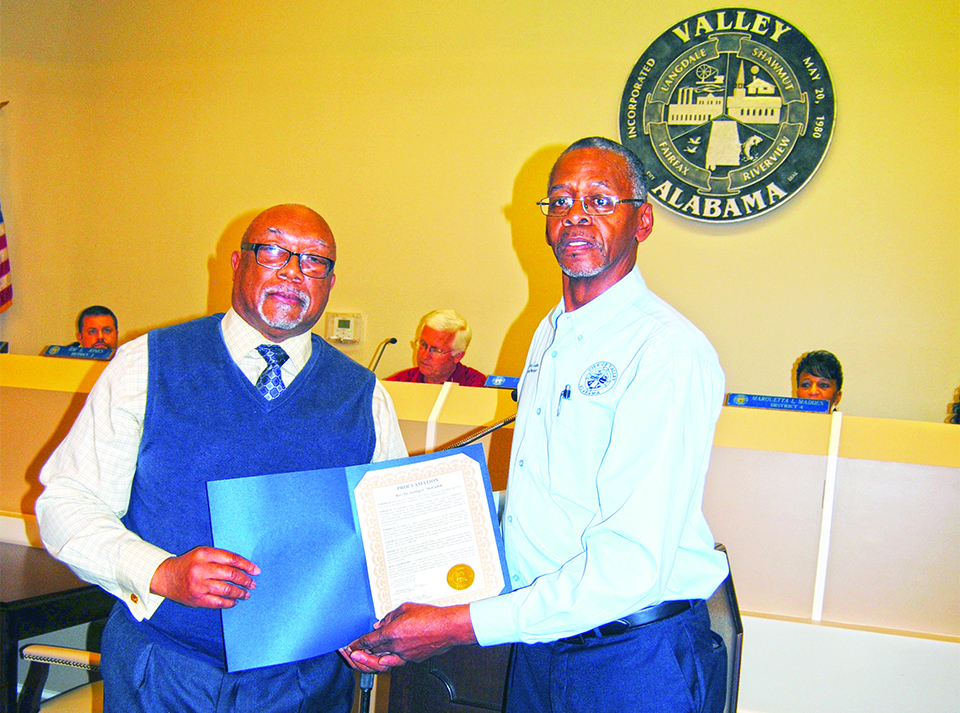 VALLEY — The Rev. Dr. George McCulloh, the former assistant superintendent of the Chambers County School District, was honored with a proclamation presentation at Monday’s meeting of the Valley City Council. It was a special event for Black History Month.

Valley’s current mayor, Leonard Riley, was the school district’s superintendent while Dr. McCulloh worked in the central office. Both retired on the same day – Sept. 1, 2011.

“I can say I never worked with a finer person,” Riley said. “I trusted him more than anyone else I ever worked with. We didn’t always agree on everything, but in 32 years of working together we never had a cross word.”

Dr. McCulloh, in turn, said that Riley was as great a man as anyone he had ever been around.

“I think we have the best mayor the city’s ever had,” he said to much applause.

Council Member Paul Story said that it was a privilege to have been around Dr. McCulloh when he was in school.

“I appreciate everything you did for our school system,” he said. “You are someone me and my entire family really think a lot of.”

McCulloh began his career in education in 1971 as a math teacher in the Baltimore (Md.) public school system and retired as the assistant superintendent for the Chambers County system in 2011. He presently serves as a resource instructor for Lanett City Schools.

Since 1988, he has been the pastor of the Pleasant Grove Missionary Baptist Church in Lee County. He’s also a board member of the Planting Seeds Community Agency, the Boys and Girls Club of Chambers County and the Charter Foundation.

“He has demonstrated outstanding leadership and set an example of giving back to one’s community,” the proclamation reads. “As part of the City of Valley’s Black History Month observance, we hereby recognize a
pillar of our community, Reverend
Dr. George C. McCulloh for his many contributions, his unselfish commitment and his tireless service to the
City of Valley and the Greater Valley Area.”