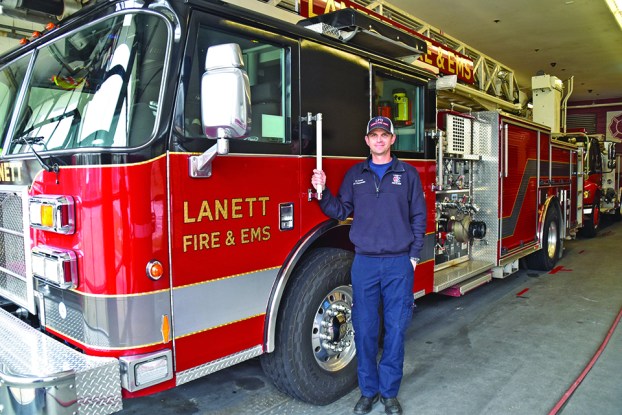 STEVEN THOMAS | Times-News Glad he did it: Brian Owens, shown above with a Lanett firetruck, is glad he decided to become a firefighter.

Owens glad he decided to become a firefighter

LANETT — Brian Owens has been a member of the Lanett Fire & EMS Department for the past five years and he loves it.

“This is my second career,” he said. “I have a degree in forestry and worked in the timber industry for about eight years.”

The reason he now works for a fire department, according to Owens, is due to burnout.

“I was looking for something a little different,” he said.

Owens recalled meeting Fire Chief Johnny Allen, who mentioned the city needed paramedics, “and I had absolutely no idea what being a paramedic was.”

But he looked into it and about two weeks later he was enrolled in EMT school.

After the first semester, Owens was hired but the entire training process, including fire school, took two years.

“I enjoy it,” he said. “It’s a good job. The best part about it is the guys I work with. It’s not really a job when you come to work. You live with these guys.

“When I was in forestry, I was at home every day and night. My office was a pickup truck. I was on the road dealing with land owners and loggers and trying to procure wood. Coming to this, every time to tone goes off it’s something different. There’s a little bit more of an adrenaline rush.”

When not at work, Owens is home with his wife, Kim, and two children: 11-mon-old Mack and three-year-old Sallie-Grace.

“That’s the tough part about it,” he noted. “When I started this, I didn’t have kids. You kind of miss being at home with them.”

Overall, Owens said he has a pretty calm life.

“Working on the fire side of things, we enjoy the firefighting aspect and fortunately for the people around here we don’t get to do a lot of it,” he said. “The EMS side. It can be taxing  but you meet a lot of people, you get to help people.”

He added that the best part of working as an EMS is seeing a positive outcome to a situation.

That service is the main draw for Owens.

Valley looks to do some major resurfacing this year