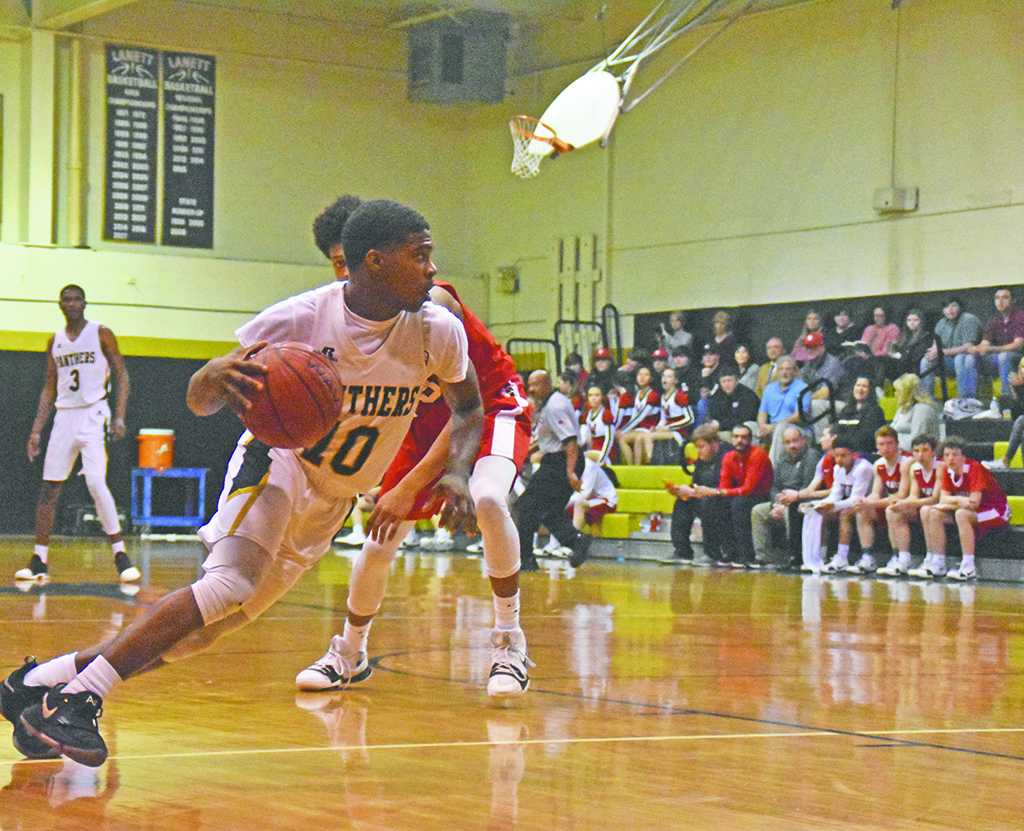 Lanett High School senior Ty Truitt (10) scored a team-high 15 points on Tuesday in the Panthers' 85-58 victory over Westbrook Christian in the sub-regional round of the Class 2A state playoffs. (Photo by Sam Chandler)

LANETT — Kristian Story swished a deep 3. Anquaevious Pollard went untouched to the basket for a soaring layup. Kaleb Thomas canned a fadeaway jumper at the buzzer.

And that was only in the first quarter of Lanett’s dominant 85-58 victory over Westbrook Christian on Tuesday night in the sub-regional round of the Class 2A state playoffs.

The Panthers (22-5) built a 19-point lead through the opening period and never looked back.

“We’re always supposed to come out with a good start,” said senior guard Ty Truitt, who posted a team-high 15 points.

His squad did. Whether it was in the post or from beyond the arc, Lanett found the basket early and often. The Panthers pressed with the same frequency.

Truitt and Quae Houston harassed Westbrook Christian’s guards from the moment they received the inbounds pass.

The visitors struggled to escape the backcourt without throwing the ball away or having it stolen.

“That’s what we wanted to do,” Lanett head coach Richard Carter said.

It worked to perfection.

The Panthers led 22-3 after one quarter and 50-17 at halftime. The comfortable cushion allowed Carter to empty his bench beginning in the second quarter.

All 14 players on Lanett’s roster finished the game with at least one basket.

“You can’t even measure how much this means for them,” Carter said of his reserves, “because we may need them before this season’s out.”

Lanett led 70-36 after Jaren Ross drilled a 3 from the left wing at the end of the third quarter. From there, the Panthers coasted in for the win.

With the win, Lanett advances to Friday’s Northeast Regional at Jacksonville State University. The Panthers will play Vincent in the region semifinal. The Yellow Jackets beat Fyffe on Tuesday, 53-36.

Vincent was ranked second in the most recent 2A state poll published Feb. 1. Lanett, the two-time defending state champion, was ranked third.

“Everybody’s trying to beat us,” Truitt said, “so we’ve just got to come out like we did tonight and finish the whole thing.”