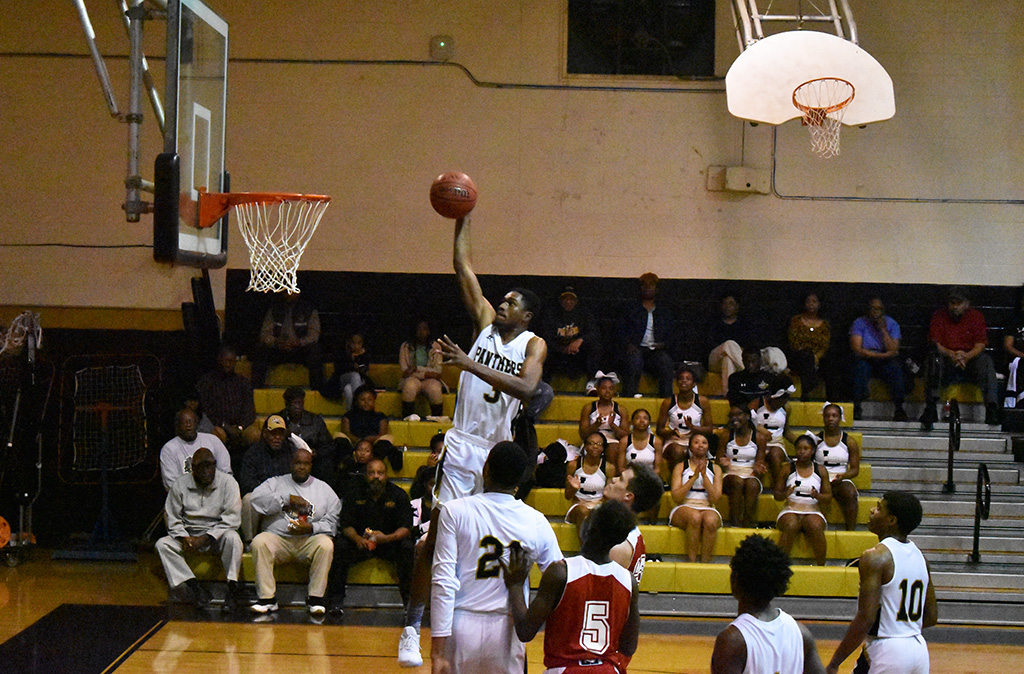 Lanett High School senior Anquaevious Pollard (airborne) recorded 19 points in the Panthers’ win over Horseshoe Bend on Tuesday in the first round of the Class 2A, Area 8 tournament. (Photo by Sam Chandler)

The Lanett Globetrotters then took over.

With the outcome firmly in hand, the Panthers played the final period with the high-flying abandon and carefree attitude characteristic of the Harlem squad with the same name.

Quae Houston swished a 3 from 35 feet. Ty Truitt tossed a pass off the backboard and into the waiting hands of Anquaevious Pollard, who threw down a powerful dunk. Even Truitt, who stands 5-foot-8, attempted to slam one home.

He came up centimeters short, but he shook it off with a smile.

Besides, there wasn’t much to frown about in Lanett’s 107-39 triumph over Horseshoe Bend in the first round of the Class 2A, Area 8 tournament.

“I think that was a good start for us,” Panthers head coach Richard Carter said. “We had a lot of fun.”

But first, Carter’s troops took care of business. Lanett (19-5) implemented a full-court press from the get-go that gridlocked Horseshoe Bend. As the Generals’ backcourt turnovers accumulated, so did the Panthers’ point total.

Lanett held a 17-2 lead midway through the opening quarter. Emanuel Littles and Pollard, who are 6-8 and 6-7, established early dominance of the boards against a much smaller Horseshoe Bend lineup.

“When you’re outmatched like that, it’s tough to really get up for a game like this,” Generals coach Chad Kison said. “But we never stopped working, so I was proud of them for that.”

Lanett stretched its edge to 48-16 at halftime and 78-27 after three quarters. The Panthers did not pull their starters until the waning minutes of regulation.

In December, Lanett lost to Horseshoe Bend while most of the team was still playing football. In two subsequent meetings, Lanett oustscored the Generals 221-89.

Littles tallied a game-high 20 points, and Pollard added 19. But Carter praised their performances on the other end of the court.

“Both of them played extremely well on defense,” Carter said. “When they’re doing that and Ty Truitt’s pushing that ball down the floor, along with Quae Houston, man, I’ll tell you what, we have a tremendous basketball team.”

Lanett will face a stiffer test on Friday. That’s when the Panthers, ranked third in 2A, will face sixth-ranked LaFayette in the area final.

The teams already have met twice this season, with Lanett winning each time.

But Carter knows that nothing is guaranteed, especially against a rival.

“They may say they are not seeking revenge, but we know that what would make their season is beating us on Friday night,” Carter said. “Our kids understand that we’ve got to come out and we’ve got to give our best.”