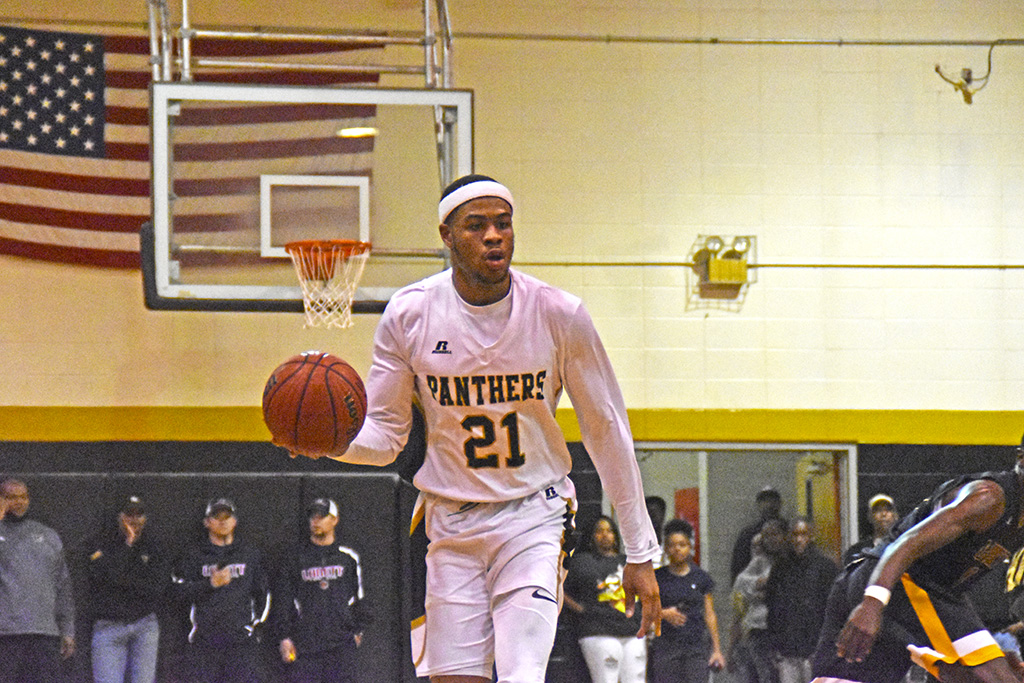 Lanett High School senior Emanuel Littles (21) scored 10 of his 18 points in the fourth quarter of Friday’s Class 2A, Area 8 tournament final against LaFayette.

LANETT – Richard Carter’s team had its back against the wall. But his players didn’t crumble under the pressure that filled the Lanett High School gymnasium.

After falling behind by 17 points in the third quarter, the Lanett boys basketball team closed the Class 2A, Area 8 tournament final on a frantic run that enabled it knock off rival LaFayette, 64-58.

LaFayette senior JaMarquez Boston-Gaines drilled a deep 3-pointer early in the third quarter to give his team a 44-27 lead. After surrendering the triple, Lanett outscored its opponent 37-14 down the stretch.

“I think they gave out,” Carter said of LaFayette. “Our size took over.”

Lanett secured its first lead of the game with under two minutes to play in the fourth quarter. Senior Ty Truitt knocked down a pair of free throws after drawing a foul on an attempted layup. His clutch shots provided Lanett a 56-54 edge.

But LaFayette, which led by 11 points at halftime, countered with a putback from 6-foot-3 eighth-grader Antavious Woody.

Lanett took control from there.

Free throws from Kristian Story and Emanuel Littles, along with defensive stops, allowed the Panthers to pull away.

Littles and Anquaevious Pollard combined for 18 points in the final quarter.  Pollard posted a game-high 24 points, and Littles had 10.

“I think what it will do is it will energize to us know that, ‘Hey, they’re going to be some close ones, they’re not all going to be runaways, and you’ve just got to come out and play hard every night,’” Carter said.

It was Lanett’s third victory over LaFayette this season. The Panthers were ranked third in the most recent 2A state poll.

LaFayette, which on Friday received 12 points apiece from Corey Boston and Woody, was recently ranked sixth.

The win means that Lanett will host either Collinsville or Westbrook Christian for a subregional playoff game on Tuesday.

LaFayette will travel to face one of those two teams the same night. On the line will be spots in the sweet 16.

A few winters ago, Michael Bratcher watched his LaFayette girls basketball team suffer a painstaking defeat in the area final. The Lady Bulldogs lost to Lanett by more than 70 points.

Afterward, he encouraged his players to harness the heartache because, eventually, a breakthrough would come.

“I told them, ‘Y’all have to let this simmer. It’s going to happen, and when it does, it’s going to feel so good. It will be unbelievable.’”

The Lady Bulldogs are now believers after Friday’s 53-44 upset victory over Lanett in the area tournament final.

It was only Bratcher’s second victory against the Panthers in his eight-year tenure at LaFayette.

“They just played their tails off tonight,” he said. “I’m extremely proud of them.”

LaFayette’s full-court press caused a bevy of early turnovers. The Lady Bulldogs capitalized on them, opening a slight lead that they never relinquished. LaFayette held a 26-19 edge at halftime and a 37-32 advantage entering the final quarter.

“She sold out and played her tail off,” Bratcher said.

Makyia Broughton and Alyse Madden scored 13 points apiece for Lanett, which was ranked ninth in the most recent state poll. LaFayette dropped its first two meetings with the Panthers this season.

As a result of the victory, the Lady Bulldogs will host either Sand Rock or Collinsville for a subregional playoff game on Monday. Lanett will travel to face one of those two teams the same night.

On the line will be spots in the sweet 16.