Panthers play it cool ahead of state semifinal 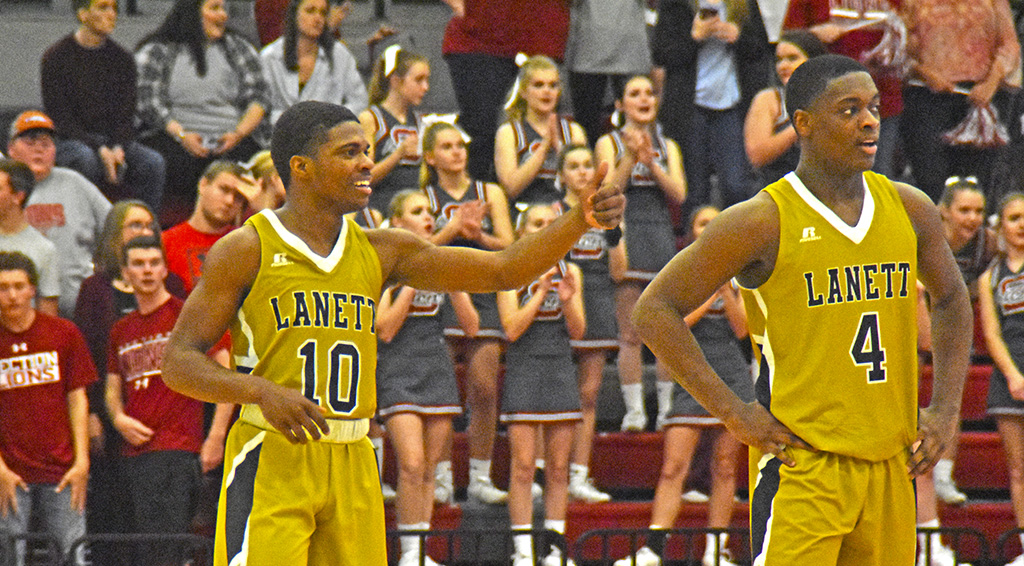 Lanett High School senior guard Ty Truitt (10) scored 40 points in this past Monday’s victory over Section in the Class 2A Northeast Regional final. He said he wants to match that total in next week’s state semifinal against Aliceville. (Times-News file photo)

LANETT — Richard Carter saw a team that can shoot the basketball well.

A team that prefers to play in the halfcourt.

A team that doesn’t have a phenomenal inside game due to its lack of size.

These characteristics describe a number of Carter’s past opponents, but now they belong to the Aliceville High School boys basketball team.

On Monday, it will face Lanett (24-5) in the Class 2A state semifinal in Birmingham. A victory would clinch the Panthers’ spot in Friday’s state final.

“The key for us is, number one, control the boards, and make sure we close out on their shooters,” said Carter, Lanett’s head coach. “If we do that and get the ball out to our guards and run the floor, oh, it will be exciting times for Lanett.”

Carter and members of his coaching staff traveled to Montgomery on Thursday to watch Aliceville (20-2) face Keith in the Central Regional final. Aliceville won, 51-32, behind 15 points from tournament MVP Jaquan Lee.

Nicknamed the Yellow Jackets, Aliceville last advanced to the state final four more than two decades ago, in 1993.

Lanett, on the other hand, has been on this stage more recently. The Panthers have advanced to the state semifinal in six of the last eight seasons.

“We won’t be satisfied until we win it all,” senior forward Emanuel Littles said.

After its most recent outing, Lanett appears on track to collect another blue map.

The Panthers punched their ticket to Monday’s state semifinal by trouncing 2A’s top-ranked team, Section, in the Northeast Regional final this past Monday.

Lanett rolled to a 76-52 victory behind 40 points from senior guard Ty Truitt. Since the state playoffs started Feb. 13, the Panthers have outscored their opponents by more than 26 points per game.

“We’ve just got to keep up the good work,” Truitt said, “and play how we played Monday.”

To duplicate their performance, the Panthers will need Truitt to continue his stellar shooting. He converted 14-of-23 field goals and went 8-for-12 from 3 against Section.

They also will need Littles and fellow senior forward Anquaevious Pollard to dominate the glass. The duo collected 27 of Lanett’s 53 rebounds against Section, which had about half as many.

Lanett held a substantial height advantage over its past opponent, and it will again on Monday.

The Yellow Jackets’ tallest player is listed at 6-foot-4. Bolstered by the 6-foot-8 Littles and 6-foot-7 Pollard, the Panthers have eight players 6-4 or taller.

“We’ll just go to work early,” Pollard said of the matchup with Aliceville, “and they’ll probably start packing in. That’s when we can throw the ball out to Ty — and let him drop 40 again.”

Truitt said that is his goal. On Friday, it looked possible. Toward the end of practice, Truitt drained 3 after 3 from NBA range, as if the rim was the size of a crater.

He insists that he and his teammates aren’t nervous ahead of Monday’s meeting with Aliceville. Littles and Pollard agree.

The three seniors have been here before. As they’ve learned, cool trumps chaos this late in the season.

“Their excitement is not one of these jumping up and downs, but understanding the moment,” Carter said. “They understand the moment. They know what lies ahead.”

Monday’s matchup will be played at the Birmingham-Jefferson Convention Center at 8:30 p.m. EST.