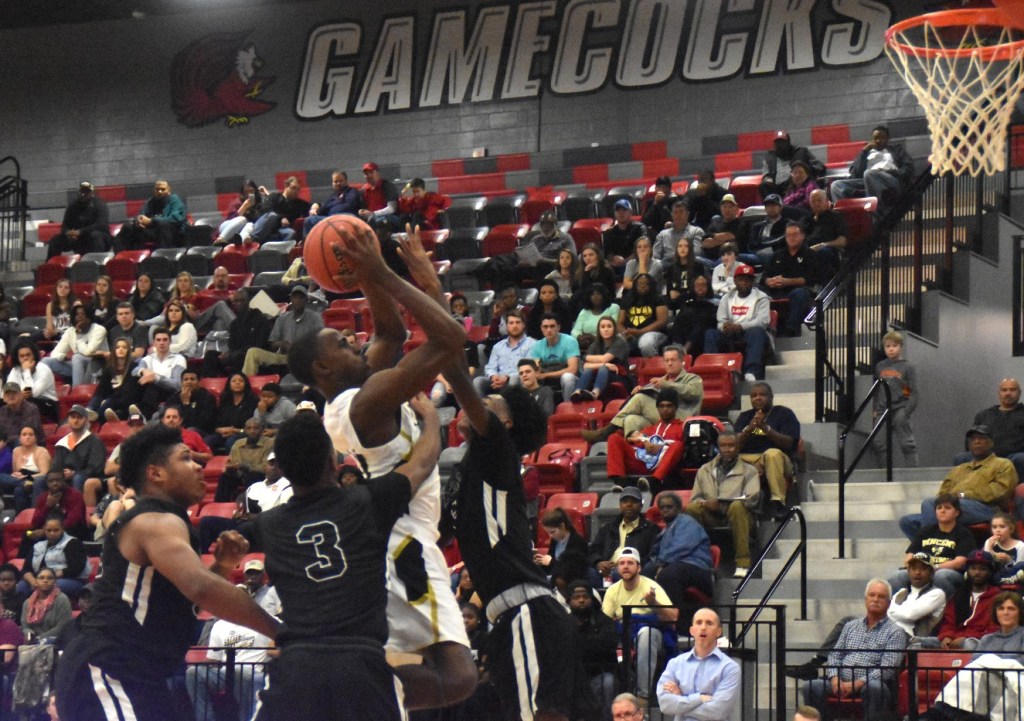 Lanett High School junior Trikweze Bridges (11) attempted a soaring field goal on Friday in the first half of his team's regional semifinal game against Vincent at Jacksonville State University. (Photo by Sam Chandler)

JACKSONVILLE — Anquaevious Pollard straightened three of his fingers and jabbed them against his head after sinking a third-quarter 3-pointer on Friday night.

He then launched another long-range shot on the Panthers’ next possession. This one came up short, but Emanuel Littles had his back.

The 6-foot-8 forward corralled a rebound and made a layup as he absorbed contact. A defensive foul was called on the play, prompting Littles to let out a roar.

“That’s what we play for,” he said. “When we come in the locker room, we say we’re going to put our foot on the gas and never let up.”

After battling through a slow start, Lanett (23-5) throttled down continuously in the Class 2A Northeast Regional semifinal to secure a 62-33 victory over Vincent (23-7).

The Panthers are now only three wins from clinching a third consecutive state title. On Monday, they will face Section in the regional final (aka elite eight) back at Pete Mathews Coliseum in Jacksonville.

“We kind of took charge with our defense, which we rely on a lot,” Lanett head coach Richard Carter said. “That’s what made the difference. When we started taking care of business on defense, turning them over and rebounding, it was on. The party was on.”

It made for a sweet celebration.

Lanett, which has won its past 13 games, entered the postseason ranked third in 2A. Vincent was ranked second, a fact not lost on the Panthers

“We feel like we’re the number one team,” Littles said, “and we feel disrespected by not being number one in the rankings, even though rankings don’t matter.”

But at the outset of Friday’s game, it appeared their positions might have credence. Vincent opened the game on an 8-1 run and led 10-7 after the first quarter.

While the Yellow Jackets pounced on early opportunities, Lanett wasted them. Multiple times the Panthers missed close-range shots and putbacks that are normally guarantees.

Lanett deployed a smothering full-court press that made it difficult for Vincent to reach the frontcourt. The tactic cooled the Yellow Jackets’ once-hot offense. They never regained their sizzle.

“We knew what we were up against,” Vincent head John Hadder said. “They are super talented, super deep. Coach Carter does a good job with them in the system that they run.”

As the Yellow Jackets began to flounder, Lanett broke out of its funk in the second quarter. Trikweze Bridges scored on a layup in transition, Littles and Pollard went to work in the post, and Kristian Story drained a long 3.

The Panthers took a 24-15 lead into halftime as a result. Their advantage grew to 18 by the end of the third quarter.

“We kept up the tempo,” senior guard Ty Truitt said. “Coach told us to keep up the tempo and keep playing defense and don’t give up, so that’s what we did.”

Littles finished with a double-double, tallying 16 points and 11 rebounds. Pollard (12), Truitt (10) and Story (10) joined him with double-figure point totals.

Christopher Hardie had a team-high nine points for Vincent.

Now, the Panthers will prepare for Section, which used buzzer-beating heroics to knock off LaFayette in Friday’s other regional semifinal. Tipoff is set for 5:45 p.m. EST on Monday in Pete Mathews Coliseum at Jacksonville State University.

“We know it’s going to be a war,” Carter said. “Section’s a very good basketball team. Hopefully, if we play our game, I think we can do what we do.”