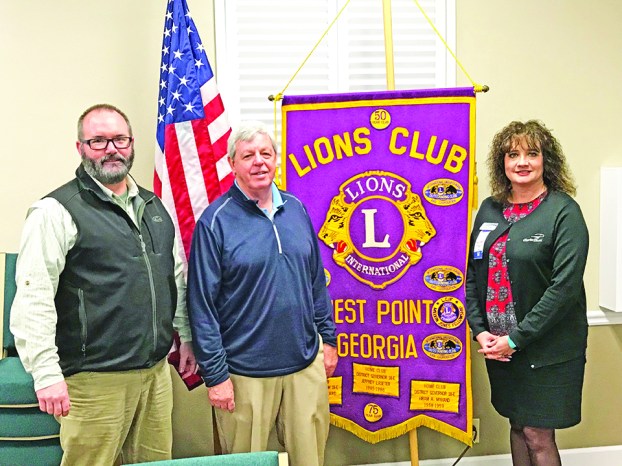 WEST POINT — In 21 years Alan Wilson has seen a lot, from growth in all aspects to a change of venue. But it has been under his leadership as athletic director at Point University that things have really been changing.

Wilson was the guest speaker at the Wednesday meeting of the West Point Lions Club. He was there at the invitation of club member Bill Dorminy.

Since the move to West Point, the school has seen a boom in the number of sports available to students. Besides football, basketball, baseball, and softball, also offered are cross country, golf, lacrosse, soccer, swimming, volleyball, tennis and cheerleading.

“We’ve exploded athletically,” Wilson said. “We truly have better days ahead of us.”

The director said the school’s mission when it comes to athletics could be compared to a three-legged stool, “If one gets out of order, then it falls over.”

The first leg is the school wants students to do well in the classroom.

“We understand the importance of going out into the world with and without a diploma,” he said. “We want them to walk the stage and get the diploma so they can be successful.”

The second leg is wanting to win.

“We are competitive,” Wilson said with a laugh. “In the world we live in today, sometimes winning gets taken out of perspective and is more than it should be, but sometimes that is how the world gauges success.”

The final leg is wanting the athletes to grow spiritually.

“We want them to know where they stand with Christ,” he said. “That’s what’s eternal.”

Wilson added that the staff of the athletic program has also been a big help.

“I feel our staff is one of the best, from top to bottom,” Wilson said. “They do a phenomenal job.”

He also noted the school recently signed a contract with Adidas to exclusively use the company’s gear.

Wilson transitioned into a short question & answer session, answering as members of the Lions Club asked about specifics on the current state of the school.

Of the topics broached, Wilson noted that enrollment has increased slightly but consistently each year since the move to West Point and that they are considering ways of adding additional sports to the program, including track and field.

“That’s kind of it in a nutshell,” he said, ending the meeting.

The West Point Lions Club meets the first and third Wednesday each month. The next meeting will be Feb. 21 at noon in the West Point Presbyterian Church.

LaFAYETTE — On Monday of this week, the Chambers County Commission backed a request made by Extension Coordinator Ken McMillan... read more