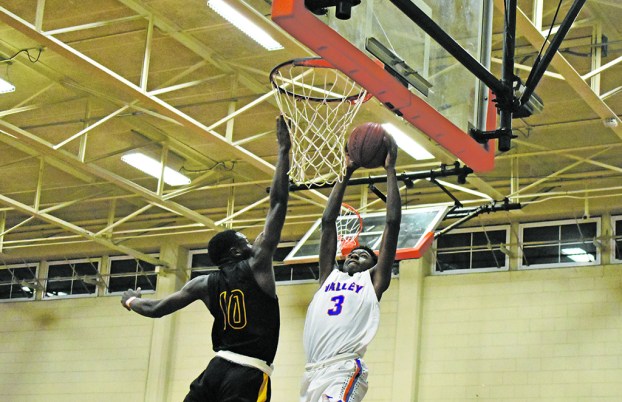 Rams down LaFayette in overtime

VALLEY — The first meeting between the Valley High School boys basketball team and LaFayette came down to the wire.

Friday’s tilt was no different. But the outcome was.

Valley has now won five of its past six games. Its latest victory would not have been possible without the grit, grind and cool it displayed for 36 minutes on Friday.

The Rams clung to a one-point advantage at the end of the first, second and third quarters. Valley began the fourth period with a 34-33 edge before the teams exchanged leads on multiple occasions.

LaFayette opened its largest margin, 46-41, on a slicing layup in transition from sophomore guard Corey Boston. But Valley senior Quez Trammell responded by sinking 3-of-4 free throws on consecutive possessions to pull within two, 46-44.

LaFayette took a 48-46 lead with a little more than a minute to play. Valley freshman Jacquez Trammell knotted the score at 48-48 on an ensuing layup.

Neither team made a bucket in the final minute of regulation.

During the transition between the fourth quarter and overtime, Valley’s seniors took command of the team huddle.

“They said, ‘We’re not going to lose this,’” Harper said.

The Rams started overtime on a 9-2 run that essentially put the game out of reach. Trammell, the senior, drilled a 3 from the left corner to make it 55-50. Trammell, the freshman, then dribbled behind his back en route to a layup that extended Valley’s lead to seven.

“We had more intensity,” Quez Trammell said. “We played harder than they did.”

The freshman finished with 18 points and 11 rebounds. Keionte Dent added 13, and Quez Trammell had 10. The Rams hit 19-of-25 free throws in the contest, including 10-of-12 in the fourth quarter and overtime. Boston led LaFayette with 18 points.

“We’ve been playing from opening tip to the fourth-quarter horn,” Harper said. “The kids believe.”

The Lady Bulldogs held a 23-16 halftime lead before blowing the game open in the second half. Jasmine Pitts tallied a game-high 29 points. Her teammate, Feliah Greer, recorded 13 points and 16 rebounds.

“This is a big one for us,” LaFayette eighth-year head coach Michael Bratcher said. “We’ve never beat Valley at Valley since I’ve been here.”

LaFAYETTE — Not even head coach Jason Allen expected to be in this position. Not after losing an accomplished senior... read more