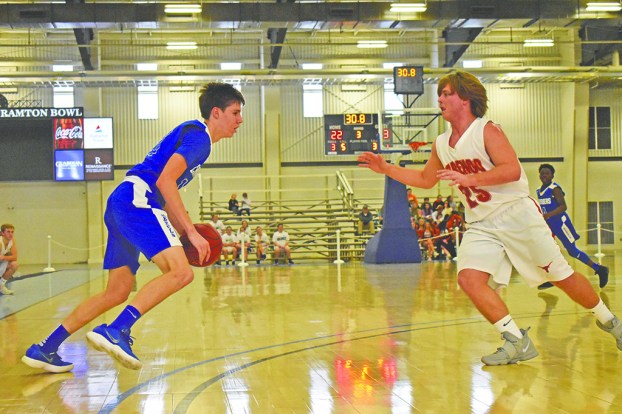 LaFAYETTE — Not even head coach Jason Allen expected to be in this position. Not after losing an accomplished senior class. Not after dropping 13 games and winning only three in the regular season.

But the Chambers Academy boys basketball has persevered through defeat and doubt. Now, the Rebels (6-14) are preparing to play in their fourth final four in the past five years.

“Absolutely not,” said Allen, when asked if he thought his team would make a postseason run.

The Chambers Academy boys knocked off Marengo Academy on Tuesday, 47-32, in the AISA Class A state quarterfinal to advance to today’s state semifinal against Evangel Christian Academy. The Rebels have won three of their past four at the region and state tournaments.

“I told these guys if you’ll continue to believe in what we’re doing and keep working, we want to be playing our basketball at the end of the year,” Allen said. “That’s when it counts. To their credit, they have.”

Chambers Academy routed Sparta Academy, 69-39, in the first round of last week’s region tournament to clinch its spot at state. The Rebels then fell to Evangel, 58-33, and beat Abbeville Christian Academy, 56-55, to secure the No. 3 seed.

Allen’s son, Payton Allen, sealed the tight victory on a putback layup with 23 seconds left in regulation. The freshman has helped carry the team amid its surprise surge. He has averaged more than 19 points per game since the region tournament began last week. That included a 26-point performance in the clobbering of Sparta.

But Payton Allen has had some assistance, too. Colton Hand, Rodriguez Dark, C.J. Lyons and Blake Sheppard are a few players who have helped spur the Rebels in crunch time.

“They’ve worked, they’ve bought into what we’re trying to do and they’re reaping the rewards of it right now,” Jason Allen said. “We’re playing our best basketball by far.”

The Rebels did not advance to the state tournament last season, snapping a streak of three straight appearances. In 2014, they won the state crown.

The team will have to upset Evangel to make it back to the championship game. Chambers Academy has fallen to the Montgomery-based school three previous times this season.

But at this point, no opponent appears unbeatable.  Tipoff is set for 7:30 p.m. (CST) at the Montgomery Multiplex.

“We’re excited to be in the final four,” Jason Allen said. “We know anything can happen this time of year.”