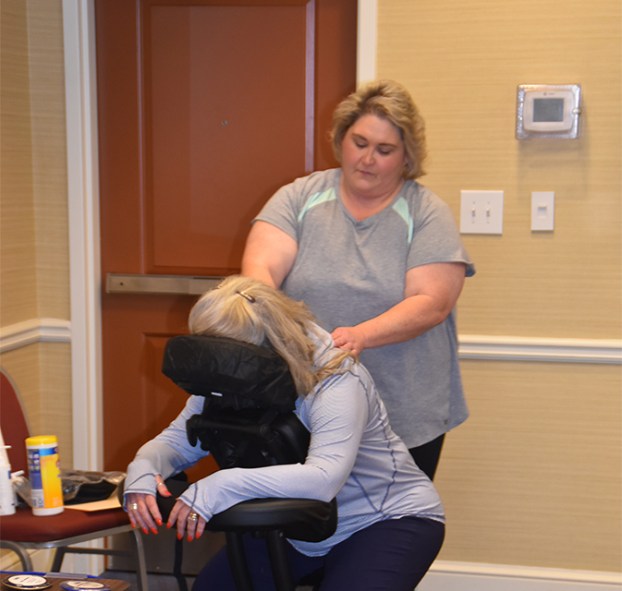 Tracie Smith gives a massage to Jody Elmore at the end of a meeting of the West Point Rotary Club. (Photo by Steven Thomas)

WEST POINT — It was a relaxing day for members of the West Point Rotary Club as they were treated to a massage by a licensed therapist.

The guest for the Thursday meeting was Tracie Smith, a licensed massage therapist that runs he business out of her home.

Smith, who admitted to turning 50 this year, said she didn’t enter school to learn massage until three years ago.

“I worked in health care most of my life, in different areas, and I never found the one thing that really helped,” she said, noting her last job was as an office manager for a local chiropractor.

Because the office had a massage therapist on staff, they would receive numerous calls to set up an appointment. This, and the added fact that Smith and her husband would also travel to visit a therapist, meant they saw how high the demand was.

Due to the cost of getting an out-of-town, Smith thought, “I like massages. Maybe this is something I could do?”

That simple thought, however, didn’t lead to an immediate result.

Southern Union at the time, according to Smith, was not offering any classes on the subject and Virginia College in Columbus had just decided to shut the program down.

“I took that as a sign,” she said, adding that a short time later she discovered a therapeutic clinic in Opelika was also a private school for the subject.

She went to the clinic and met everyone there. Eventually she signed up for classes and later became certified.

She noted that during the six months of training required for certification, she handled around 300 people.

Smith then transitioned into discussing her actual business.

“There are many different types of massage,” she said. “I specialize in deep-tissue massage.”

Dealing with a client involves getting to know them, their routines and environment, so each massage is tailored to each client.

Smith listed off the several ways massage can help a person, from a simple way to relax to a way to increase circulation and detoxify the body.

“You don’t have to be a certain type of person to get a massage,” she said. “It’s not a luxury anymore. It’s almost a necessity for some people.”

Ending her discussion, Smith invited members of the club to a free massage. Most were hesitant at first until Jody Elmore volunteered.

Afterwards, several more members got a massage and all looked more relaxed in the end.

The next meeting of the club will be held at the Hampton Inn in Valley next Thursday, Feb. 8 at noon EST. Steven Chandler will be the speaker.