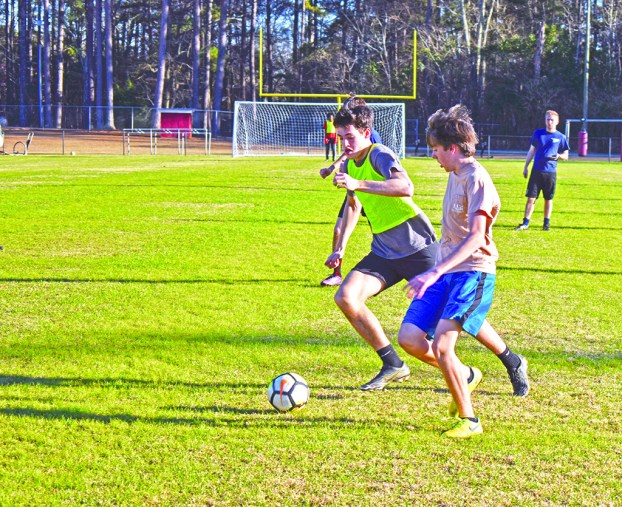 sam chandler | Times-News Kicking it: The Springwood School boys soccer team practiced on Thursday afternoon ahead of today’s game at Emmanuel Christian in Dothan. The Wildcats will play 10 regular-season matches this season.

LANETT — It won’t take a herculean effort for the Springwood School boys soccer team to make history on Saturday.

All the Wildcats need to do is step on the field.

At 4 p.m., Springwood will play the first game of its inaugural season against Emmanuel Christian in Dothan.

“It’s exciting to see the passion that the kids have,” head coach John Lanier said. “You can tell that this is something they love to do, and it’s always amazing to see them be able to represent their school.”

Lanier, a 1999 Springwood alumnus, didn’t have the same opportunity when he was growing up in Lanett. By his memory, recreational and high school soccer programs were almost nonexistent.

“It’s exciting to see not only the popularity rise in the community, but also here” at Springwood, Lanier said.

The Wildcats fielded a club team for the first time last spring.

But it only practiced and participated in a handful of scrimmages under the direction of former Point University soccer player Roberto Carrizosa.

Lanier, the director of student finance at Point, knew about Carrizosa’s involvement with the program.

After Carrizosa’s graduation from Point in December, Lanier reached out to Springwood and offered to help.

Although Lanier didn’t play soccer growing up, he developed a heart for the game as his kids — who attend Springwood — took it up.

Now, he is overseeing the Wildcats’ first season of competition in the Alabama Independent School Association.

“It’s real exciting,” center back Gunnar Hartzog said. “I think we’re going to do a really good job this year.”

Hartzog is one of three seniors on the Wildcats’ 19-member roster, which includes players from grades six to 12.

The team will contest a 10-game regular-season schedule in advance of the state playoffs in April.

Lanier will be assisted by two former Point players in Jacob Price and Hugo Marques.

“I think we have a lot of talent on the team, and I think we can really compete with some of the teams we’re going to play,” Lanier said. “We’re going to give it all that we have.”

LANETT – Richard Carter’s team had its back against the wall. But his players didn’t crumble under the pressure that... read more