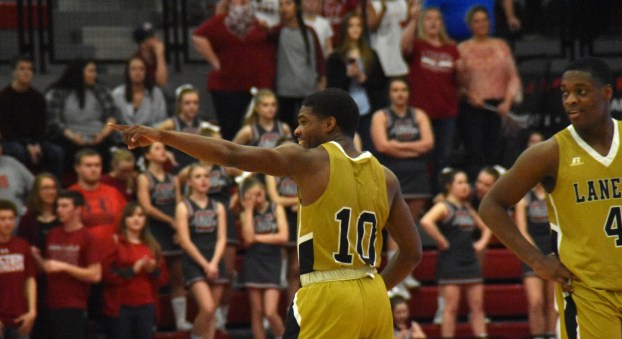 Truitt called it the game of his life.

Truitt drained 14-of-23 field goals, including 8-of-12 from beyond the arc, in a dazzling all-around performance. He contorted his body to make tough shots in transition, swished triples from around the perimeter and brought a boost of energy to the polished hardwood at Pete Mathews Coliseum.

“We never expected Terrion Truitt to score 40 points,” Section head coach Jamie Pruett said. “You’ve kind of got to choose your poison. Our poison was that we were going to let them shoot outside shots. This being our lucky day that Terrion Truitt was 8-for-12 from the 3-point line.”

But Pruett’s plan enabled Section (24-7) to find initial success. The Lions settled into a zone defense designed to hold Lanett senior forwards Anquaevious Pollard and Emanuel Littles in check. It proved effective, limiting the duo’s ability to create second-chance opportunities at the outset.

Lanett didn’t capitalize on the open perimeter looks at first. The Panthers shot less than 30 percent from the field in the opening quarter, which is when Section had the hot hand.

The Lions knocked down four 3-pointers to start the game and owned a 17-15 lead after eight minutes.

“I’m not really sure why it takes us about four or five minutes to get ready to rumble,” Lanett head coach Richard Carter said, “but after we got into our defensive push, everything started coming together.”

Section made only one field goal in the second quarter. Truitt, meanwhile, settled into an even deeper rhythm. He poured in 15 points in the period and entered the locker room with a larger individual tally, 25, than Section’s team tally.

“I feel like the second quarter was kind of the backbreaker for us,” Pruett said. “We just couldn’t score…we turned the ball over a little bit more, and they started catching fire.”

Lanett didn’t cool off after intermission. As Pollard and Littles began to dominate the interior, Truitt kept shooting away.

Rarely did he miss. After canning a pair of 3s in the second half, he dangled his tongue from his mouth, pointed to the crowd and brushed his right arm as if reloading an arsenal.

“This year is our last year,” Littles said, “and we just want to give Lanett the best that we can give them.”

The Panthers certainly gave their fans who traveled to Jacksonville State University a show in the fourth quarter, which they entered with a 29-point lead, 62-33.

Truitt lobbed a pass to Trikweze Bridges for an arena-igniting alley-oop. Bridges then brought the crowd to its feet a couple of possessions later with a one-handed dunk.

The outcome was decided. By then, the Panthers were just having fun.

“The last three years we’ve had a group of people that love being together and love playing together,” Carter said. “When you’ve got that kind of chemistry going for you, hey, it’s hard to beat.”

Only two games now stand between Lanett and a third straight state title. The Panthers will play either Aliceville or Keith in next Monday’s state semifinal at the Birmingham-Jefferson Convention Center. Tipoff is slated for 8:30 p.m. EST.

JACKSONVILLE — Anquaevious Pollard straightened three of his fingers and jabbed them against his head after sinking a third-quarter 3-pointer... read more