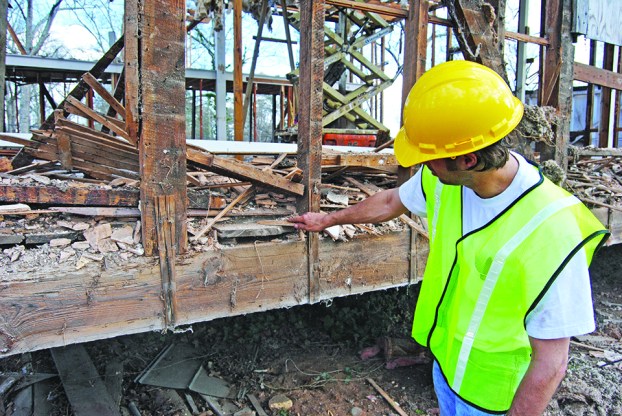 Wayne Clark | Times-News SOME GOOD WOOD: John Bush, owner of the Henry Hudson Company, points to some high-quality wood in the Bethlehem Baptist Church building on River Road in Valley.

VALLEY — At a work session on Thursday evening, Mayor Leonard Riley talked about what’s been going on at Bethlehem Baptist Church on River Road.

Demolition of the 145-year-0ld structure began on Monday and should be finished in a few days.

It’s being taken down by the Henry Hudson Company for is salvage value.

“It’s coming down one board at a time,” said Mayor Riley. “I don’t know how it was still standing. It must have been the plaster between the boards.”

There’s a big crane outside the church building to help with the demolition. The building is so unsteady that a workman has to be in a harness to get anything done at the top of the building.

“It’s not safe to stand on the building, but they have to get up there to take down the trusses,” Riley said.

Nearby resident Donald Williams left a substantial sum of money in his estate and directed that it be used in the restoration of the church. He died in the recent past, and the money is available to be used at the site. Even though it’s a very generous gift, it’s not nearly enough to restore the old building. Structural engineers who have looked at it determined that it would cost more than $1.5 million just to firm up the foundation. The building had major structural issues as well.

The executor of Mr. Williams’ estate believes that the best way to honor Mr. Williams’ wishes is to have a major restoration of the Bethlehem Church cemetery. That’s presently under way.

Riley said that some graves that were in really bad shape have been straightened and are now in pretty good shape. Once the church building is completely down and moved from the site, a parking lot will be built there and an ornate fence placed around the cemetery. A gazebo-type structure will be built on the edge of the cemetery for the placement of historic markers and as a place where visitors can rest.

The bulk of the money from the estate will be going to the new senior center. In his later years, Mr. Williams was very active with the senior center program.

“We’d like to have this work done before grass cutting season gets here,” the mayor said.

On the subject of cemeteries, Planning & Development Director Travis Carter discussed the six cemeteries owned by the city and whether or not any of them could be expanded. The city is responsible for six cemeteries: Bethlehem Church plus Langdale, River View, Fairfax, Fairview and Shawmut.

The ones most likely to be expanded are Fairview and Fairfax.

The city has plans of doing an estimated $1,5 million in paving this year. Plans are to resurface five roads by July. These include portions of 55th and 56th Streets, a portion of Cusseta Road and 23rd Boulevard. The biggest project will be River Road from Trammell Block in Fairfax to School Street in River View. This will start in July, once some work currently being done by the East Alabama, Water, Sewer and Fire Protection District is finished.

Riley said that East Alabama is getting close to opening the new fire station in Fairfax and that it looks to be a first-rate facility. It should offer better fire protection for the community with a good possibility of lowering fire insurance premiums for homeowners.

City Treasurer Cathy Snowden offered an update on where city departments are on their budgets one-third through the fiscal year.

“Four months into the current fiscal year, all departments are within their budgets,” she said.

“Our revenue is running ahead of projections,” Riley said. “Sales tax is slightly ahead, beer taxes, business licenses, rental taxes and Community Center memberships are where they normally are this time of year.”

Riley said he was very pleased that the most recent audit had been completed.

“It’s the earliest we’ve ever had one completed,” he said. “Cathy did a great job on it. There’s no excuse for getting way behind on an audit. You just have to stay on top of it and get it done.”

The just-completed audit, said the mayor, is one of the best ones the city has ever had. “It’s clean and unqualified,” he said. “There are no findings.”

Such an audit will improve the city’s credit rating. Generally speaking, the higher the credit rating, the lower the cost of borrowing money, should the city decide to do that.

“The bottom line is that we are in really good shape,” Riley said.

“This is your Sunday reading,” he kidded with them.

Riley told council members that Monday’s regular meeting won’t be a long one.

A big-ticket item the city will be looking at in the next fiscal year is replacing the pool pack at the Community Center. This is something that sits on top of the Community Center and is large enough for a man to stand up in. It makes the area around the pool less humid and reduces the chlorine in the water. A new one costs more than $250,000.

The present one is on its last legs.

“Hopefully, we can limp along till October 1st,” Riley said. “Then, we will do what we have to.”

The mayor said the city is close to getting the specifications on some road paving projects in the industrial park.

Development of the new addition to the park may be impacted by the presence of an Indian burial site.

“There may be some graves on the land we purchased,” the mayor said. “We will have to do some more probing to know for sure.”

There may be some graves on a ridge that may need to be leveled.