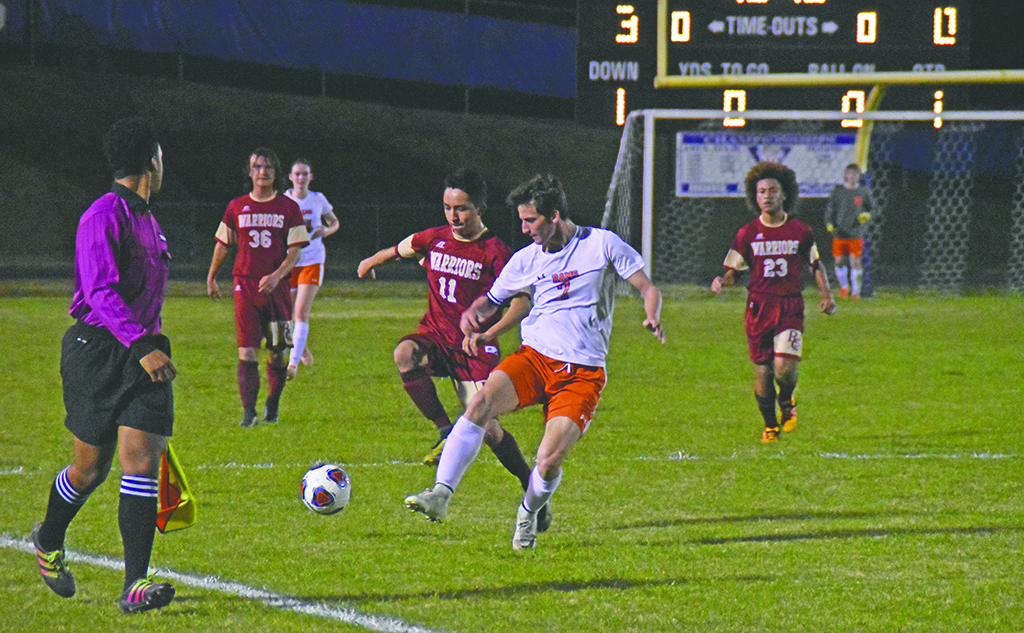 Valley High School senior Jacob Peacock (7) kicks a ball out of bounds in the first half of his team’s home game against Russell County on Wednesday night. The Rams fell 7-2, but head coach Cullen Milner praised his team’s effort. (Photo by Sam Chandler)

Once it begins to gain momentum, it will catch steam and motor to a number of victories.

“But right now, we’re still trying to push those boxcars,” he said.

Milner, the Rams’ first-year head coach, inherited a varsity coed team that has struggled mightily in previous seasons. Valley won only a handful of games in a handful of years prior to his arrival.

Seldom did the team, which consists primarily of boys and thus competes against all-male opposition, find the back of the net.

That’s why Milner extracted encouragement from Wednesday’s 7-2 loss to Russell County. Twice his team lit up the scoreboard on a clear night at Rams Stadium.

“I think they did well overall,” Milner said. “We’ve got a few things to work on, but like I’ve told the kids, we’ve got the tools. Here and there during the game, we showed signs of greatness.”

Frequently, it surfaced in the general vicinity of Matthew Gibson. Despite surrendering five of Russell County’s seven goals, the senior goalkeeper made save after save amid constant pressure. He dove to his right, leaped to his left and sprawled out full extension on repeated occasions. His sure hands helped nix a number of scoring threats.

“He played the night of his life,” Milner said. “The goals that did get in on him were tough breaks.”

The strikes came in bunches.

After netting two first-half goals within a minute of each other, Russell County scored four in a six-minute span after intermission.

The burst enabled the Warriors to turn a 3-1 halftime lead into a six-point advantage with 26 minutes to play.  Senior Elder Santos accounted for both of Valley’s tallies.

He beat the keeper in breakaway situations after corralling pinpoint through balls from junior Levi Sanders.

Santos’ first goal came in the final minute of the first half. His second came midway through the second half.

“He knows his way around the game,” Milner said of Santos. “He’s a big asset.”

The loss to Russell County brought Valley’s record to 0-3.

But as the team’s trust, communication and knowledge of the game improve, Milner is confident that favorable results will come.

“They’re so passionate and so focused on getting that first win that they just lose sight of the unity and communication and trusting each other,” Milner said, “so we’re working on those things, and they’re going to come with time.”