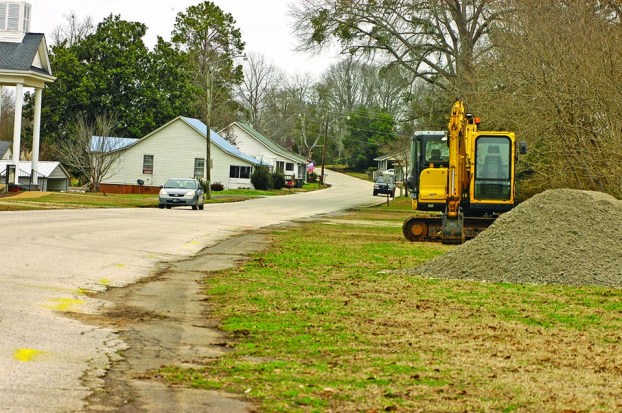 WAYNE CLARK | Times-News ROAD IMPROVEMENTS NEEDED: Much needed help is on the way for California Road and River Road in Valley. The City of Valley has approved more than $900,000 to resurface these two roads this year.

Valley looks to do some major resurfacing this year

VALLEY — The Valley City Council on Monday approved close to $1.5 million in road paving projects. Chris Clark Paving & Grading, Lanett, has been awarded a contract to resurface eight roads. They include River Road from Trammel Block in Fairfax to the intersection with Columbus Road in the River View community, California Road from Columbus Road to School Street, 23rd Boulevard, 25th Boulevard, 55th Street West, 56th Street West and Cusseta Road. Mayor Leonard Riley described it as the biggest paving project that’s been approved in the six years he’s been mayor.

“The funding will be coming from the bond we did six months ago,” he said. “This has been a long time coming for both River Road and California Road. I know River View residents will appreciate this.”

The mayor apologized to residents of the area for not doing this sooner.

The city had intended to resurface River Road last year but delayed it due to some work being done in that area by the East Alabama Water, Sewer and Fire Protection District. In addition to building a new fire station on the village green in Fairfax, East Alabama has been replacing some underground pipes along River Road and on California Road.

City officials have been holding off on paving the two roads until East Alabama is finished with some much needed work they had to take care of.

Of the approximately $1.5 million that will be spent by the city this year on road paving, over $900,000 of that will be going to River and California roads. Another big-ticket item will be 55th Street, where more than $260,000 will be spent.

In addition to doing some much needed paving on some city streets, the council is also attempting to get some work done on the CV Railway walking trail. At Monday’s meeting, the council unanimously approved a resolution seeking $346,500 in Recreational Trails grant funds. If approved at the federal level, the city would contribute $69,300.

Riley said that the trail is close to 25 years old now and needs some new pavement. If approved, the funding would resurface the seven-mile long trail and add some additional improvements.

In other action, the council held a first reading of an unsightly yard ordinance. It could be approved following a second reading on February 26th. The new ordinance would make it unlawful for anyone in the city to allow the premises around their house to become unsanitary or unsightly. Anyone in violation of the ordinance would be informed by the city code enforcement officer that they had a certain amount of time, 45 days or so, to clean it up on their own or the city would do it for them. The cost the city would incur with that cleanup would then be filed against them in the form of a lien.

A seven-item consent agenda approved unanimously by the council included a resolution that would authorize the mayor to seek bids to remove dirt on the commercial side of Valley Industrial Park. This is the section that fronts Fob James Drive near King Auto Corner.

Also approved was a lengthy document in which the city enters into a contract with WOW! for a new telephone system. The city also agreed to pay its share of funding in support of the Greater Valley Area Chamber of Commerce. The total is $10,000 with Valley paying $5,015, Lanett $3,405 and LaFayette $1,580. The percentage share is based on population.