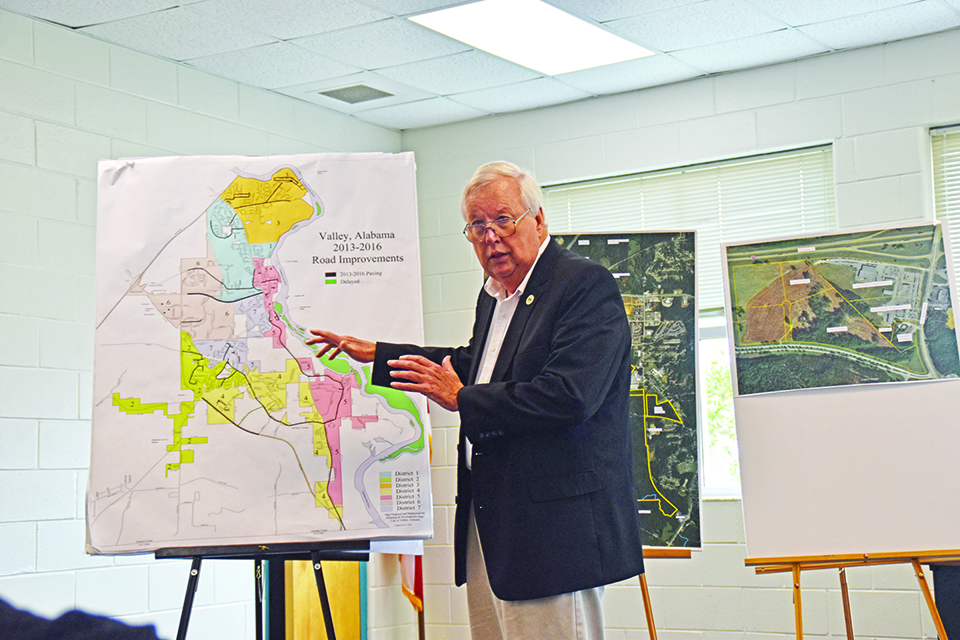 Steven Thomas | Times-News Showing the work to come: Valley Mayor Leonard Riley points out the places where road improvements have been completed and where others will come during the first of four “State of the City” meetings with area mayors.

VALLEY — Valley Mayor Leonard Riley had nothing but good things to say during the first of four “State of the City” Lunch N Learns put on by the Greater Valley Area Chamber of Commerce.

Riley started out by giving a brief history lesson, telling the gathered crowd that five years ago the city was in financial trouble when he was elected.

Since then, he said, the city has gotten out of the hole and moved forward with a plan in place than works to keep the city financially stable and making improvements.

Currently the city is doing well, with department heads staying within their budgets. This leaves the city with $6.2M in the bank, $2.8M in reserve and $3.6M in a bond fund for infrastructure.

The city has also refinanced its bonds and had savings each year.

Moving on to the various projects underway, Valley is working to fix the infrastructure.

The Sportsplex is also getting a facelift, which includes better lighting, a new senior center and enlarging the fitness room.

The last area Riley spoke on was the state of the effort to revitalize industry in the area, this includes clearing the old mills away so the land can be used for future development.

Riley said a decision had to be made on whether to be a “player” in industrial development. This is all in an effort to keep people working in Valley as opposed to traveling outside the city every day to go to work.

This also will fix the issue of diversifying the local industry, i.e. not relying on a single industry for jobs in case that industry decides to close or move.

“We did not want to be in that situation again,” he said.

This has worked out, lowering unemployment and reopening old facilities..

Some of those successes include the announcement of John Soules Food Inc. locating a plant in Valley that will eventually process 140 million pounds of meat. Work will begin between April 1 and mid-May and take 18 months before opening.

Riley said the deal to bring the company here was a pleasant one. John Soules Food led Riley through a similar plant to show the process. This dissuaded the mayor of his fears the plant would lead to a foul smell hanging around the town.

The city has also made efforts to expand the amount of land available for potential industries, purchasing and clearing land, most recently the Resurrect Antiques lot.

Riley added that there were already a few prospects showing interest in Valley.

The mayor ended by telling the gathered audience that the city is doing great, alongside West Point and Lanett.

“We are all working together to make it go,” he said. “In the past we’ve been number 2 on three separate [potential] projects. Not anymore.”