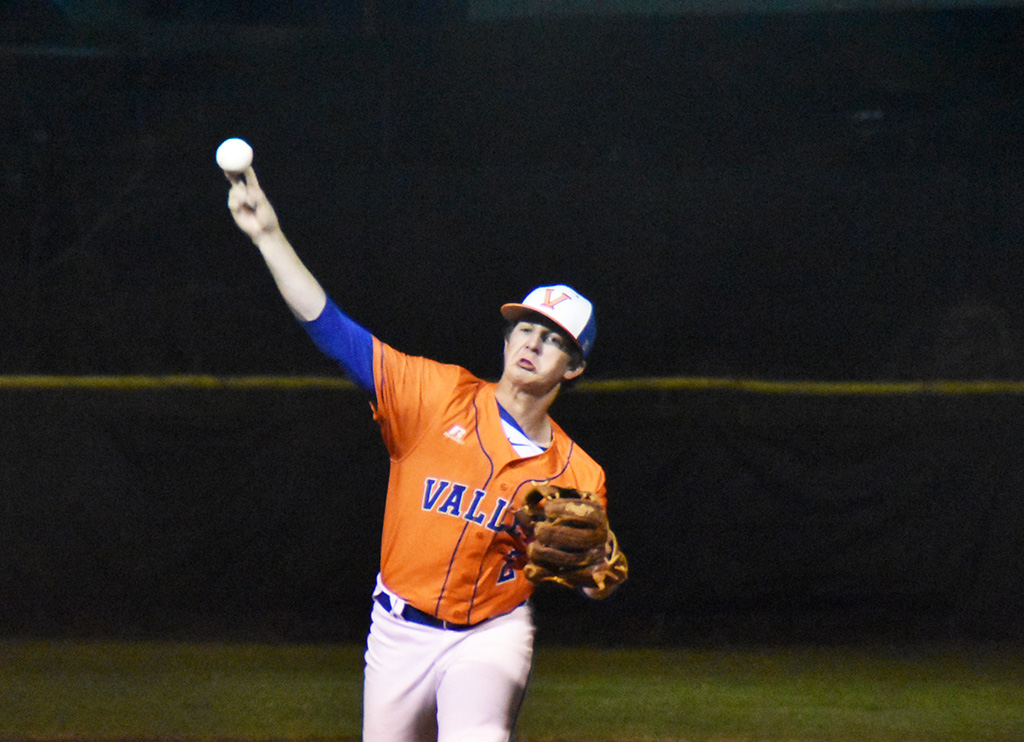 Valley High School sophomore Eli Culpepper (2) helped pitch the Rams to a 6-4 victory at Beulah on Tuesday night. He recorded six strikeouts and surrendered four hits in 5 2/3 innings on the hill. (Photo by Sam Chandler)

BEULAH —  The Valley High School baseball team found its swing in the fifth inning of Tuesday’s game at Beulah.

The bats proved the difference.

After falling behind by two runs in the fourth, the Rams rallied to score four unanswered en route to a 6-4 victory at Bobcat Baseball Park.

After senior Coby McDonald began the fifth inning with a double to left field, Bledsoe blistered an RBI double that sailed to the fence in right centerfield.

Osborne, Valley’s cleanup batter, followed with his own piece of timely hitting in the ensuing at-bat. He yanked a hard groundball that skipped down the line, slid under the third baseman’s glove and rolled into the outfield.

Bledsoe scored on the wormburner, which capped a long at-bat. Osborne battled relentlessly before putting a ball in play, pounding pitch after pitch toward foul territory.

The RBI single tied the game at 4-4, which is where the score remained through the bottom of the frame.

Valley sophomore Eli Culpepper, who pitched 5 2/3 innings and notched the victory, held Beulah scoreless once the Rams knotted the score.

He surrendered four runs on four hits while striking out six and walking six.

But in the sixth, he ran into trouble.

After inducing two quick groundouts, he gave up a double to McDonald that caromed off the left field fence.  Davis rapped an RBI single in the following at-bat, giving Valley a 5-4 lead.

After Beulah issued an intentional walk to Bledsoe, who went 2-for-3 with two RBI, Osborne capitalized on a pitch in the strike zone. Again, his ball took a favorable trajectory.

Instead of sliding low,  it bounced high and bounded past Beulah’s third baseman. The connection, which plated Davis, pushed Valley’s edge to 6-4.

The Rams never relinquished their advantage.

Hunter Meadows took over for Culpepper with one out remaining in the sixth. He struck out a pair of Bobcats in the final inning and a third to earn the save.

McDonald had a game-high three hits in five at-bats. Senior Nolan Earle paced Beulah at the plate.  He went 2 for 4 with an RBI. Earle’s double to left centerfield in the bottom of the fourth inning bumped the Bobcats’ lead to 4-2. Sophomore Andruw Coxwell went 1 for 3 with two RBI and a walk.

Beulah will return to action on Thursday when it hosts Lanett.

Valley will take to the diamond again today. The Rams will host Tallassee, with first pitch scheduled for 5 p.m. EST.