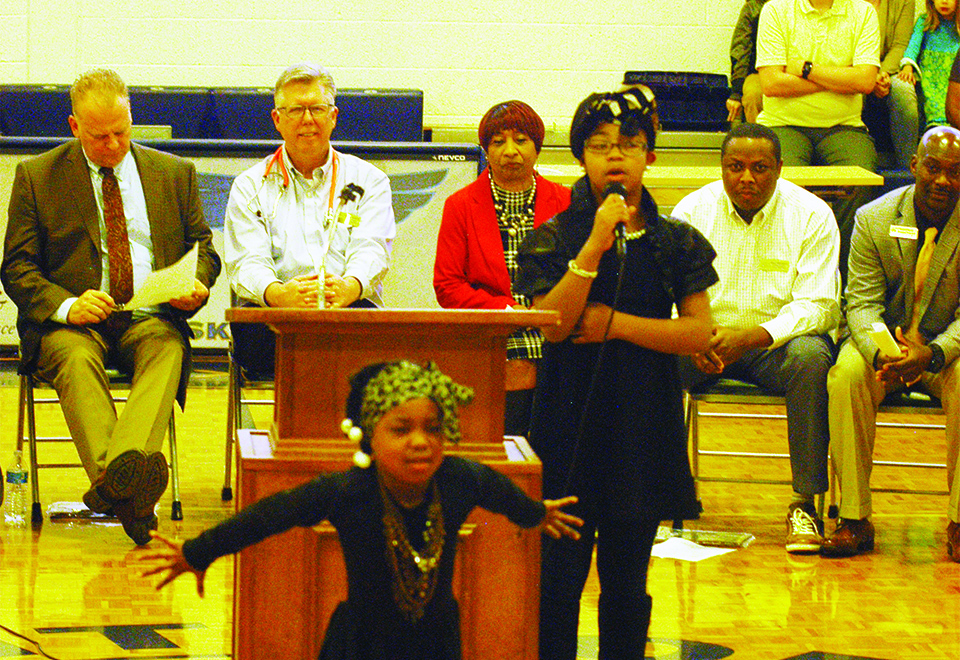 Wayne Clark | Times-News SINGING AND PRAISE DANCING: Attendees at Tuesday afternoon’s Black History celebration at the West Point gym were treated to some beautiful singing by KaLisa Lynch and praise dancing by Jazmyne Lewis. West Point Mayor Steve Tramell remarked that it was amazing to see such talent in children so young.

WEST POINT — The City of West Point’s 15th annual Black History program had a theme of “One Hour.”

Program emcee Sandra Thornton had a goal of getting it done in that time span, and everyone working together pulled it off with a few minutes to spare.

A speech, the presentation of lots of awards and some very good singing and praise dancing took place within that sixty-minute time frame inside the West Point Park gym.

The guest speaker for the program was Dr. Keith M. Hall, a U.S. Army veteran of Operation Restore and Continue Hope in Somalia and currently an anesthetist and physician’s assistant at the Emory Critical Care Center in Atlanta. He encouraged a large number of school-age youngsters gathered inside the gym to believe that they can do anything they set their mind to do.

“I want you to believe that you can do it!” he said.

Hall said that he had grown up in the less-than-prosperous side of town in West Palm Beach, Fla. He learned a good work ethic from his father, who has a brick mason, and his mother, “who did the best she could for us.”

On some days, Hall’s dad would leave home at 4 a.m. and not get back till after dark. That kind of dedication toward making a living and providing for a family made a deep impression young Keith.

Hall was very tall at a young age and excelled in basketball. His talent got him a scholarship to Johnson County Community College in Overland Park, Kan. He played for two years and earned an associate’s degree. He then joined the Army, hoping to get into the medical field. He was a medic on what was thought to be a rather uneventful mission to Somalia. That’s not the way it turned out. It would get nasty and put the Army medics who were there under extreme stress. It would provide the setting for the famed movie “Blackhawk Down.”

“In October 1993 we were in Mogadishu, and around 2:30 in the afternoon we heard an explosion,” Hall recalled. “We knew we would have to take risks in saving people. I had to make use of the training I had. It was like being on the basketball court, where who had to do what came to you naturally and do it without thinking.”

Hall said that he had been trained by medics who had been on battlefields in the Vietnam War. Their instruction served him well that day. “56 people were killed,” he said. Many more were spared.

The experience motivated Hall to get more medical training when he was honorably discharged.

“After completing my tour of duty, I completed my undergraduate degree and certificate of completion from the University of Washington in a physician assistant program in Seattle, Wash.,” he said.

Hall would practice in internal medicine and emergency medicine until being recruited to join the University of Kansas Otolaryngology Head & Neck Surgery Department in Kansas City, Kansas. He went on to receive more specialized instruction.

“I would receive academic instruction from some of the world’s foremost institutions such as the University of Toronto, the Cleveland Clinic, the University of Washington, and the University of Florida. Currently, I practice as both an anesthetist and physician’s assistant in the Department of Anesthesiology at Emory University Hospital Midtown and within the Department of Surgery at Cancer Treatment Centers of America, in Newnan,” he said. “I am striving to help develop a definitive leadership role for advanced practice providers in the newly forming field of perioperative medicine. Lastly (and most importantly), I would like to thank God Almighty for His ordering my steps and allowing me to have a beautiful wife (Larina) and four intelligent and wonderful children. I consider mentoring and instruction to be an honor and realize that it is the potential key in the lives of young people for better tomorrow.

Hall said that he’s around people every day “who don’t look like me” and “who may wonder how I ever got there.”

“It can’t be a lonely journey to be around people who don’t know how to communicate with you,” he said

“Don’t let anyone tell you it can’t be done,” he said, looking directly at members of West Point Elementary School’s Character Council. “If you had told me ten years ago that I would be where I am today I would have never believed you. I would have laughed in your face, but it happened. You can do it, too. The work that’s required is tremendous, but it’s something you can do.”

Hall said he speaks to young people a lot about his background in both sports and academics.

“I tell them that they can’t all be great athletes,” he said. “Don’t get mad when I tell you that because it’s the truth. Why don’t you get mad when someone tells you you can’t be a scientist. I want you to be driven to prove them wrong.”

Hall received a standing ovation at the end of his speech. He smiled and waved appreciatively at the crowd inside the gym.

Another standing ovation followed some singing and praise dancing by KaLisa Lynch and Jazmyne Lewis. While KaLisa sang “Thy Will be Done With the Troubles of the World,” Jazmyne made artful movements to the song.

“I can’t believe they are that talented at such a young age,” Mayor Steve Tramell said.

Among the students recognized for academic excellence at Troup was King Mwikuta, the junior football star who is committed to the University of Alabama. The West Point Elementary students receiving certificate included members of the Character Council. These are fourth and fifth grade students who excel in all areas. Their principal, Jane Franks, said it is a very prestigious honor to be a member of the council and that lots of students compete for membership in it each year.

The Springwood students recognized included 17 honor students who recently took part in a Science Olympiad at Auburn University. Among them was sixth grade student Ben Jenkins, who placed in one of the competitions at the recent event.

West Point city officials presented awards to individuals or organizations that have achieved meritorious service. West Point Fire Chief Mit Smith presented a plaque to Didar Suleman, who has been with the WPFD for ten years now.

“He was in the third grade when he came here,” Chief Smith said. “He has done a great job for us for ten years now.”

The Sulemans are Kurdish nationals who fled Iraq to escape persecution at the hands of former dictator Saddam Hussein.

Council Member Henry Hutchison presented an award to James “Foot” Hall, who has been employed by the city since 1978. Hall wore an AU cap to show support for his beloved Auburn Tigers.

Council Member Gloria Marshall recognized Mrs. Renata Buckner Dowdell with an award. Dowdell is the founder of JEWELZ, which stands for Joyfully Elevating With Excellence, Loyalty and Zeal. JEWELZ is an empowerment program that mentors young ladies from Troup County who are between the ages of seven and 17.

“I want them to be the best versions of themselves,” Dowdell said. “We want them to participate in heightened levels of social and educational activities, to learn strategic life skills and to take part in character-building exercises.”

“I love each one of them,” Buckner said. “We encourage children to think beyond the life they know and reach for the life of their dreams. JEWELZ is designed to empower youth through skills, development and scholarship. We believe that exposure to diverse environments and active participation in community ventures greatly increases a child’s ability to believe the impossible. Our goal is to have three outcomes: education, exposure and elevation.”

Council Member Jerry Ledbetter presented a plaque to West Point Vision, an organization that sponsors many local activities, an example of which is an Easter egg hunt for special needs children that will be taking place on Saturday, March 24.

Council Member Dr. Joe Downs presented a plaque to members of Point Refuge Church in appreciation for the many activities they sponsor in the local community. They had the largest delegation present at the program. Among the programs sponsored by Point Refuge are book bag giveaways before the start of school, lunch programs, and Celebrate Recovery sessions.