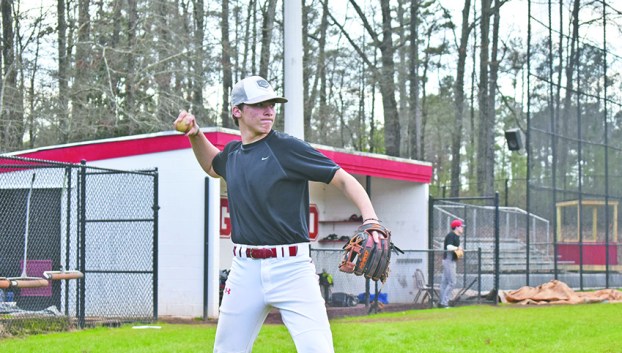 The Wildcats’ lack of arms contributed to a first-round playoff exit against Tuscaloosa Academy.

But head coach Colby Terry doesn’t anticipate a pitching shortage this spring. The team has depth, and Terry, in his first season guiding the program, has confidence.

“Last year we struggled. We had three main pitchers and we had a couple guys who could give us an inning or two,” said Terry, who served as an assistant last season. “This year, we’re a lot deeper as far as guys who can go longer, maybe go the whole game.”

The Wildcats’ ace is one of five seniors on the 2018 roster and is one of two seniors expected to help carry the pitching mantle. The other is Ricky Simmons.

The two veterans are joined in the rotation by sophomores Sam Bradfield, Cam Hopkin and Louis Morrison.

“Having multiple arms that I can put in, we stand a whole lot better chance this year than we did last year,” Terry said.

But a strong staff isn’t complete without a skilled catcher behind the plate. Springwood has that in senior Harrison Spivey, who has been a member of the Wildcats’ program since seventh grade.

Spivey said this Springwood team possesses promise, though reaching its potential will require mastery of the fundamentals.

Minimizing errors and making routine plays will be especially important at the middle infield spots, which are anchored by players on opposite ends of their prep careers.

Terry praised Plank as a player who could develop into the “real deal.”

“As long as he keeps his composure and gains confidence, he’ll be a huge part of this season,” Terry said.

Other regulars in the Springwood lineup include senior Garret Partridge, junior Dylan Anderson, junior Jake Thrailkill and sophomore Jordan Plank. Tillman Waters, a junior, also is expected to make an impact once he returns from an injury that has sidelined him early.

“We’re looking a little better this year, hoping to make a further run in the playoffs than we did last year,” Terry said.

Currently, the Wildcats are hovering around .500. But Easterwood thinks they are a better squad than the record suggests.

“It’s just been a lot of little things that have affected us,” he said. “But I feel like once we come together and we start hitting as a team, we’ll be very competitive.”

BIRMINGHAM — The countdown began nearly a month ago. Before it toppled Class 7A power Central-Phenix City on Jan. 30,... read more