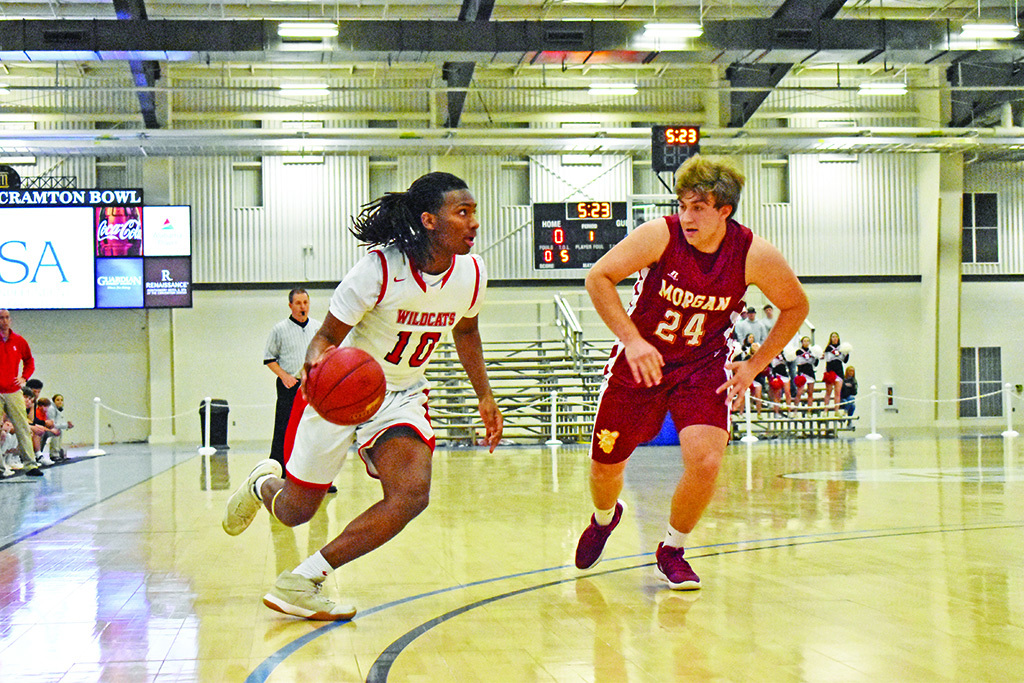 Springwood School senior Christian Lancaster (10) dribbles toward the basket in the first half of his team’s AISA Class AAA state quarterfinal game against Morgan Academy on Thursday at the Montgomery Multiplex. (Photo by Sam Chandler)

MONTGOMERY — A few minutes after punching its ticket to the final four, the Morgan Academy boys basketball team expelled a collective roar that echoed throughout one half of the Montgomery Multiplex.

The other half, meanwhile, remained silent. Season-ending losses tend to have that effect.

The Springwood School boys basketball team (11-13) fell to Morgan Academy on Thursday night, 45-39, in the AISA Class AAA state quarterfinal. The Wildcats watched a three-point lead slip away in the fourth quarter.

Springwood entered the final frame with a 31-28 edge. But Morgan Academy dug in its heels and started the quarter on a 13-4 run. Milam Turner’s free throw with 1:52 remaining extended the Senators’ advantage to six, 41-35.

Springwood cut it to two, 41-39, with a little more than one minute remaining. Senior guard Gus Davidson made layups on back-to-back possessions.

The Wildcats never inched any closer, however, as Morgan Academy finished the game on a four-point surge.

Morgan Academy’s furious finish mimicked its sterling start. The Senators jumped out to a 12-2 lead in the first quarter while finding seams in the post.

But a buzzer-beating triple from Springwood senior Christian Lancaster pulled the Wildcats within five, 12-7, the end of the period.

Lancaster drained three 3s in the contest and tallied 11 points. Davidson recorded a game-high 19 points, three of which came at the beginning of the second quarter on a long-range shot from the right corner.

Lancaster and senior Henry Smith added deep balls of their own in the period. Smith banked in a 3 from well beyond the arc before the halftime buzzer sounded.

The Wildcats took their first lead of the game, 26-25, midway through the third quarter, on a Garret Partridge layup. A field goal from Davidson and a 3 from Lancaster provided Springwood its narrow edge entering the fourth.

But it couldn’t hold on.

Springwood advanced to its first state tournament since 2015 by beating Edgewood Academy in the Region 1 tournament last Thursday. The Wildcats then upset Glenwood in the region semifinal on Friday, 49-48, thanks to a buzzer-beating 3-pointer by Davidson.

The Senators will play Lakeside on Saturday in the final four at the Multiplex. Lakeside advanced to the state semifinal by defeating Glenwood on Thursday.  Tipoff is slated for 11:30 a.m. (CST).