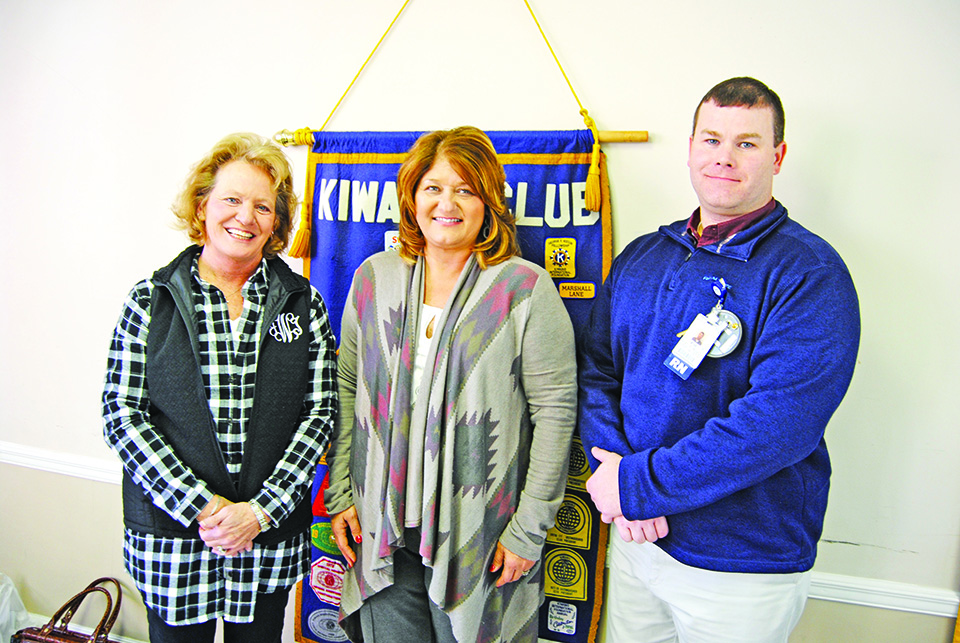 Chambers County Commissioner Debbie Wood (center) talked about her current race for the Alabama House of Representatives at a meeting of the Kiwanis Club of Valley. At left is program chair (and sister-in-law) Julie Wood and at right, Ryan Earnest, club president. (Photo by Wayne Clark)

VALLEY — Chambers County District 6 Commissioner Debbie Wood is making the local civic club circuit, talking about her candidacy for the District 38 seat in the Alabama House of Representatives. On Tuesday, she spoke to the Rotary Club in LaFayette and, on Wednesday, she was the guest speaker at the noon hour meeting of the Kiwanis Club of Valley.

Wood was first elected to the county commission in 2002 and has been reelected three times. She chose not to run for another term this year, opting instead to run for the District 38 seat being vacated by Isaac Whorton, who’s now a candidate for circuit judge.

Wood said that she wanted to go to the State House, ever mindful that she represented good, hard-working people who loved where they lived and wanted no part of scandal, an issue that’s plagued state politics in recent years.

She said that she will be basing her campaign on three primary issues: jobs, roads and bridges and the need for skilled labor.

“Jobs create hope,” she said. “In November 2008, our unemployment rate was 6.5 percent. In February 2009 it was more than 18 percent. At the time it looked like we were losing hope. Textile production was our identity for so long.”

The good news at that time was that Kia was on the way to West Point. That meant opportunities for new jobs for local people and supplier plants for the county.

“We had land for an industrial park, but we needed to get water and sewer service to it and to build a road across it,” she said.

The county took on that responsibility and today there’s 2,200 jobs that were not here before.

Wood said that there is a clear need for better roads and bridges and that it might mean a fuel tax increase to get this done. This hasn’t been done since 1992.

“In 1992, Bobby and I had been married for two years and were living on an income of $26,000 per year,” she said. “There’s no way we could do that now. We haven’t had a fuel tax increase since then. The materials needed to build roads and bridges have increased 93 percent since 1992. It’s vital to have good roads and bridges. People won’t come to your county if you don’t have them.”

Wood said that not everyone needs a four-year degree, that there is a demand for people who have the kinds of skills taught in technical schools.

“We need to take advantage of what these schools offer and train people,” she said. “We need a skilled work force in all areas.”

Wood said she was very much against unfunded mandates. “This is when the state legislature tells local governments they have to do something without giving them the money to do it,” she said.

“This is unfair to cities and counties. If they pass something, it needs to be based on an Oct. 1 deadline. That’s when we pass our budgets.”

Wood said that she’d never made everyone happy in fifteen-and-a-half years in elective office, “I’ve never based decisions on whether or not something would get me elected,” she said. “Anyone who’s like that needs to go home.”

Wood had some time to be home when she was dealing with breast cancer in 2015.

“A fire raged in me to keep working,” she said.

Wood said that she’s not necessarily in favor of term limits.

“It helps you to have someone representing you that has seniority,” she said. “Gerald Dial has been in the legislature for 40 years. If you need help with a road, he knows how to do that through the Department of Transportation. If you need help from the federal government, there’s no more capable person you can go to than Richard Shelby.”

Wood said that she’s seen some committee meetings in the State House and has seen the need for improvement in the way state government operates.

“Of all the problems we have in this state we shouldn’t waste time in committee meetings talking about things like what kind of air conditioners to buy,” she said. “That’s what they were arguing over in one of the committee meeting I saw.”

Her campaign cards are in brown and white. The brown is to remind people of wood. Her pledge to the voters is: “I will make Wise decisions, I will stay Open minded, bur remain respectful, and I will be dedicated and represent you with integrity.”