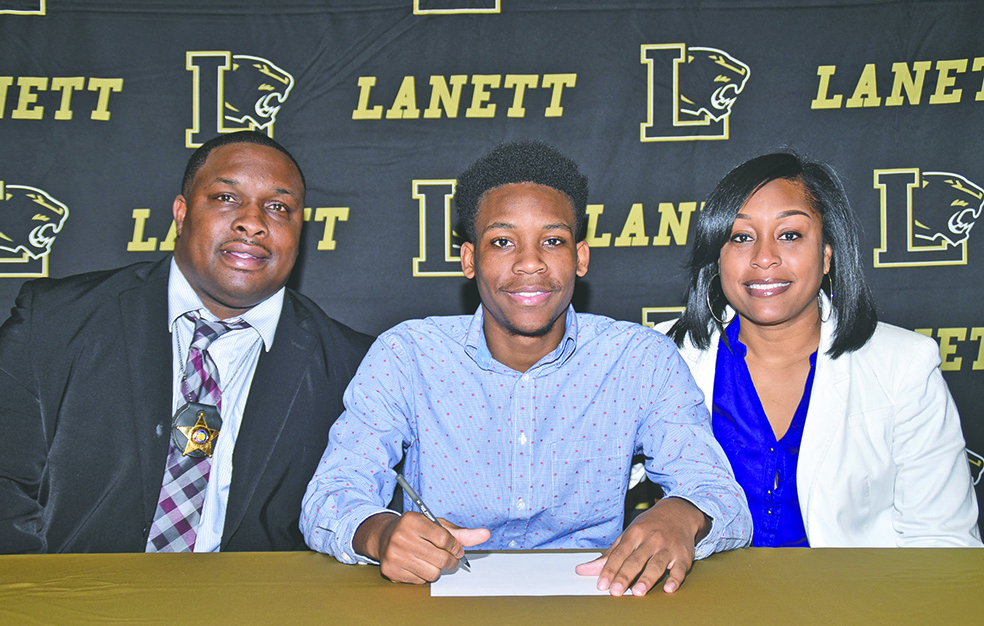 LANETT — Jatavious Barrow’s stat line for the 2017 football season stands out, though not for its glamour.

As the Panthers hurtled toward the Class 2A state title, Barrow remained on the sideline, relegated to the role of spectator.

Instead of helping make history, he could only stand by and witness its creation.

“It was difficult. Some games, where it would look like we might be down, my teammates would come to me and be like, ‘I wish we had you,’’’ Barrow recalled. “That really hit when they said that, because I knew I couldn’t play.”

Barrow suffered a severe left knee injury last summer, about six weeks before his senior season, during a 7-on-7 competition in Montgomery. He underwent surgery to repair a torn ACL and MCL in late July, nixing his campaign before it even started.

But Barrow didn’t allow the setback to dictate his future. He dedicated himself to rehab, trusted his coaches and leaned on his faith as he persevered through trying times.

Recently, he was rewarded for his persistence.

On March 8, Barrow signed a full scholarship to play football at Highland Community College in Kansas. Coaches offered him a roster spot based on his performance as a sophomore and a junior, when Barrow totaled 56 receptions for more than 900 yards and 19 touchdowns. He also recorded close to 80 tackles on defense.

“I didn’t think it would be like this at first, after my injury,” said Barrow, wearing a blue button-down shirt and khaki pants. “But I just kept pushing and fighting through.”

Barrow’s signing ceremony took place in the Lanett High library, where more than a dozen family members congregated to celebrate a moment that had seemed unlikely.

Among them was Barrow’s mother, Genika Davidson, who fought back tears while her son addressed those gathered. Davidson still remembers receiving the phone call notifying her of Barrow’s injury. She had to leave work because she couldn’t stop crying.

“At that point, I’m thinking, ‘This is his senior year, and I don’t know what’s going to happen, because I want him to go to school,” Davidson said. “In my mind, it’s like, ‘Why now?’”

Barrow pondered similar questions. In the wake of the diagnosis, he grew doubtful about football’s place in his life and wondered if he would ever set foot on a field again.

After the surgery, there were days when Davidson would walk into her son’s room to find him on the floor, lamenting the injury and preparing to disavow the game for good.

In those moments, mother and son joined together in prayer. They repeated the practice often, as faith became the bedrock of Barrow’s recovery.

“I don’t know what I would have done without it,” he said.

Tseyonka Davidson, for his part, also strived to provide Barrow with stability amid his trial. Davidson is Barrow’s stepfather, but typically “step” is left out of his title.

He has been one of the primary male figures in Barrow’s life since marrying his mother more than a decade ago. Davidson’s impact on Barrow only increased when his biological father, James Barrow, was sentenced to prison for murder in 2011.

“He is the majority of the reason I’m doing this, because he wanted this for me,” Jatavious Barrow said of James.  “He wants me to go to school and be better than him.”

Backed by his faith, fueled by his father and lifted by his family’s support, Jatavious Barrow approached the rehab process with vigilance.

He attended physical therapy every other day for two months following his operation. He also set aside time to ice, to stretch and to increase his mobility.

“I knew he had it in him,” Tseyonka Davidson said, “but I didn’t know he was going to work that hard to get back.”

As his rehab progressed and his spirit revived, Jatavious Barrow held out hope that he would be able to see game action late in Lanett’s schedule.

Prior to the regular-season finale against rival LaFayette, he implored his head coach to let him play. But Clifford Story didn’t relent.

He knew that it would not be in his wide receivers’ best interest to retake the field, risking even further damage to a healing knee.

“Before he went out, he probably had the best hands on the team, no doubt,” Story said. “He can catch a BB in the dark.”

That’s why Story encouraged Jatavious Barrow to keep his head up and continue working throughout the fall. As long as he did, Story assured him that a college scholarship would be within reach.

Jatavious Barrow will report to Kansas this summer following graduation. With his knee nearly back at full health, he is competing this spring for the Lanett track and field team as he wraps up classes.

Each day is taken in stride.

“I’ve learned that life doesn’t always go the way you want it to,” Jatavious Barrow said. “You’ve just got to keep on, keep pushing and go with it.”