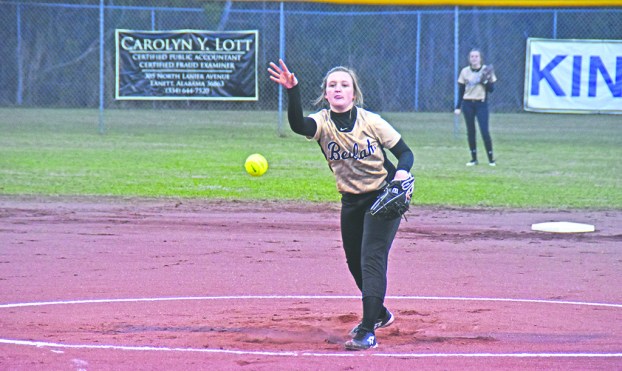 Junior Kensley Kirby is expected to be the top pitcher on the Beulah High School softball team this spring. (Photo by Sam Chandler)

Beulah softball ‘getting out the boat’ in 2018

BEULAH — In Allison Aikens’ time at Beulah High School, she has built the Bobcats softball program into a perennial contender.

The 13th-year coach has guided her team to the playoffs throughout her tenure. In each of the past three seasons, Beulah has advanced to the regional tournament.

Aikens doesn’t see why her Bobcats won’t make it back in 2018. Sure, they graduated six seniors from last year’s squad. But Aikens has faith in the talent she brings back.

“We’ve got four or five that are returning that were a big part of the program last year, and so we’re expecting them to step up,” Aikens said. “The ones that moved up from junior high definitely have some big shoes to fill. So far, they’ve done real well.”

The Bobcats have two seniors on their roster this spring. Eriona Huguley pitches, and Lora Bozeman plays first base. Behind them, catcher Jasmine Bonilla and center fielder Kensley Taylor highlight a promising junior class, which also includes pitcher Kensley Kirby.

Aikens expects Kirby to assume the ace role held last season by Brittany Todd, who now plays at LaGrange College. Sophomore Sydney Knight also will spend time in the circle for the Bobcats.

“We know our pitching is going to be one of our building points,” Aikens said, “but we’ve got to be able to play defense behind them.”

Additionally, it will be important for Beulah to capitalize on scoring opportunities. The team struggled last season to deliver hits with runners on base, stranding many potential runs.

The Bobcats appear to have amended that issue early in the season.

After being held scoreless in their opener, they rattled off 30 runs in the next two games.

Both resulted in victories.

“I expect us to keep rolling and building up momentum as we go through the season,” Aikens said. “I really do expect to be back at regionals this year.”

Aikens and her team have adopted a unique motto for the season, “get out the boat.”

It is derived from the Bible story in which Jesus told Peter to walk toward him on water.

Peter was able to stride without sinking until he took his eyes off Jesus in doubt.

“Getting out of the boat is stepping out and going out in your faith and focusing on what your goal is,” Bozeman said, “focusing on Him and not what’s going on around you.”

Aikens said that it will be critical for her team, which consists of 13 varsity players, to keep its eye on the prize.

For Beulah, that means securing yet another postseason berth.