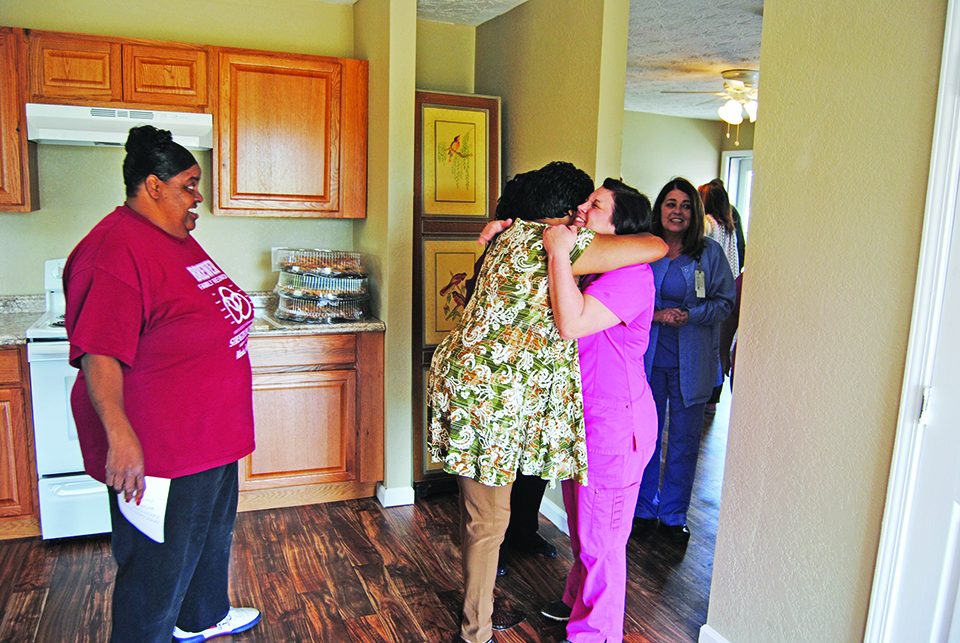 Wayne Clark | Times-News LOTS OF TEARS AND HUGS: Loretta Brewer wiped away happy tears and hugged lots of her co workers in Friday’s home dedication ceremony in Valley. Brewer said she’d always dreamed of owning her own home but until very recently thought it would never happen.

VALLEY — Loretta Brewer let out a shriek when she walked into her new home Friday afternoon. It was by no means an expression of fear or displeasure. It was one of pure joy.

Brewer was overwhelmed with the job done by her coworkers at EAMC-Lanier Hospital for building Home No. 39 of the Chattahoochee Fuller Center Project. Brewer has worked in the hospital’s cafeterias for more than 25 years now.

“Just look at these floors; they’re beautiful!” she exclaimed.

“And look at the cabinets. Everything is so nice. Thank all of you from the bottom of my heart!”

Friday’s reaction just about topped her response to being told the next CFCP home would be built for her. She had applied for a new home through the CFCP but was among several candidates being considered.

“When I visited her at the hospital she was sitting down when I told her she was the one,” CFCP Executive Director Kim Roberts said. “She jumped out of her chair and shouted, ‘Thank you, Jesus!’ and kept jumping up and down, she was so excited.”

She received the keys to the home at a dedication ceremony at 3 p.m. EDT on Friday. In addressing a crowd gathered for the event, Brewer thanked hospital administrator Greg Nichols, EAMC-Lanier Cornerstone Foundation representative Lisa Ruffin, and all the hospital employees who took part in this month’s build.

She said she had always wanted to own her own home but until very recently had given up on that ever happening.

“Miss Loretta, you have a safe, clean and affordable home,” said Roberts. “We could not have done this without our sponsors. We are so glad to have EAMC-Lanier on board with us. This is such an exciting day, and it’s so good to have all these hospital employees here with us today. We could not have done it without them.”

Roberts thanked Jon Anderson, human resources manager, for Norbord’s donation of OSB to the new home. Anderson said that Norbord was very pleased to be back in production at its local plant and was well pleased with its local work force.

Valley Mayor Leonard Riley thanked the CFCP on having built its fourth new home in Valley since September 2017. There’s room for a fifth one next to Brewer’s new home.

The city donated the land that the four new homes are built on. This new neighborhood is a case of turning a negative into a positive. The new homes are located on Huguley Road in the Rehoboth Heights neighborhood on a site formerly occupied by a trailer park that got many visits from police officers.

“We are proud to partner with the Fuller Center,” Riley said. “We hope to donate more land in the future to build more new homes in Valley.”

West Point Mayor Steve Tramell said that whereever the Fuller Center wanted to go to build new homes he would go with them.

“I am glad to be here today and will help the Fuller Center in any way I can,” he said.

CFCP President Curt Johnson said that the homebuilding efforts of the CFCP was a good example of a public/private partnership.

“This site used to be a problem for the city,” he said. “The city was having problems with a trailer park. They condemned the land, moved the trailers and donated the land to our organization so that we could build some new homes. Four of them are finished, and we will have another one here before too long.”

EAMC-Lanier Administrator Greg Nichols thanked the CFCP for giving EAMC-Lanier employees an opportunity to come together and do something for one of their own.

“I enjoyed the week we spent here working on the house. There was a lot of hard work, but there was some laughter, too,” he said. “I love being in Valley. I love the people of this community.”

Brewer has two grown sons who are in their thirties; Corey lives in Auburn and Cedric in South Carolina. Joining her for Friday’s celebration were her father, Nathaniel Brewer of West Point; her brother, Eric Brewer; and sisters, Telandra Scott and Karen Johnson.