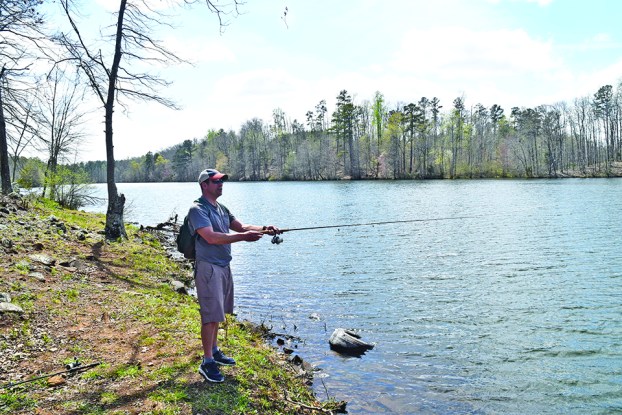 Steven Thomas | Times-News Trying his luck: Jeff Marone, of Chanhassen, Minn., is trying his luck at catching fish Wednesday at Chambers County Lake. Currently the lake is holding a series of fishing tournaments.

LaFAYETTE — It’s been an interesting month for Chambers County Lake following the first of three fishing tournaments this spring.

Co-manager Mike Craig said the first event at the 187-acre lake located at 1145 County Road 292 in LaFayette, which focused on catching crappie, has been good despite the weather.

“The weather has really been hampering us,” he said, noting the lingering cold and wind have worked to keep the water clear. “Fish bite better if the water is hazy.”

Despite that, Craig said there has been roughly 10 to 12 entrants in the March tournament, less than they had hoped for a first time event.

“I blame the weather,” he said with a laugh.

Even with a smaller turnout and weather issues, the results have been interesting.

Craig said the average amount of fish caught has been between 40-50 crappie, but one fisherman has turned in 237. The average weight of crappie is between 12 ounces and 1 pound.

The tournament ends this Saturday, March 31. Then it will be time to name the winner(s) of the three areas of judgment: largest fish, most number of fish and most weight of fish.

Craig noted that, barring someone having a particularly lucky day, the man that caught 237 will likely win all three categories.

The next tournament begins Sunday, April 1, with the goal being to catch bass. In May the tournament will focus on catfish.

Following the three tournaments, Craig said they will put on a one-day fishing tournament for kids in June.

Everyone is encouraged to come out and fish as many times as they
can each month for a chance to win any or all payouts.

The lake is open from sunrise to sunset six days a week, being closed on Thursdays. Facilities include boat ramps, a fishing pier, restrooms, concessions and primitive camping.

Holding the tournament was one of the reasons Craig and his brother, Ted, took over as lake managers.

The pair recently celebrated their one year anniversary as managers. They have helped expand what’s available at the lake, including more camping area and picnicking locations.