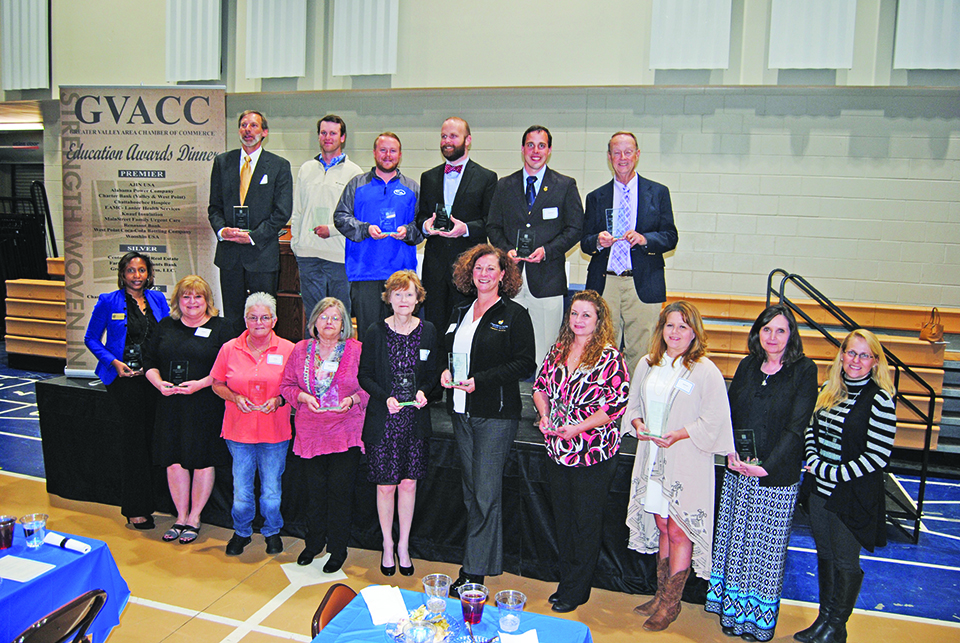 VALLEY — On Thursday evening, the Greater Valley Area Chamber of Commerce hosted its first-ever Education Awards Dinner. An estimated 300 people were present in the Valley Community Center’s Community Room for the program. A total of 25 educators, administrators and support personnel received awards in 12 categories. Seven educators from the Valley campus of Southern Union State Community College received awards along with 13 volunteers, 15 community members and 12 partners in education.

“They do their program for one school system,” Crane said. “Our program includes every school and school system in the Greater Valley Area.”

More than 20 schools were asked to take part. Those that did had nominees for the different categories.

Each nominee for an award was asked to submit a biography and to answer questions about their accomplishments. Based on their responses, some finalists were chosen in each category and they were interviewed by a select committee.

“The overall winners were determined based on a point system using the information that was provided by their finalists in a questionnaire,” Crane said. “Tonight, you will see public, private and post-secondary being recognized,”

Lisa Smith of Fairfax Elementary School is the Maintenance and/or Custodial Employee of the Year, Greta Wilson of the Chambers County School District and Jonathan Reynolds of Springwood the Transportation Employees of the Year. Dr. John Mehaffey of Chambers Academy and Dr. Kelli Hodge of the CCSD are the Administrators of the Year.

The program closed with a special award being presented to Richard Carter, who recently coached the Lanett High Panthers to a third consecutive 2A state championship in boys basketball.

“Leadership has been a very integral part of Coach Carter’s contribution to Lanett High,” Crane said. “Last year he helped introduce his players to a new character education program. He taught lessons about leadership and responsibilities that make a profound difference in the attitude of the program. He was a perfect instructor because of how genuine he is with the students.”