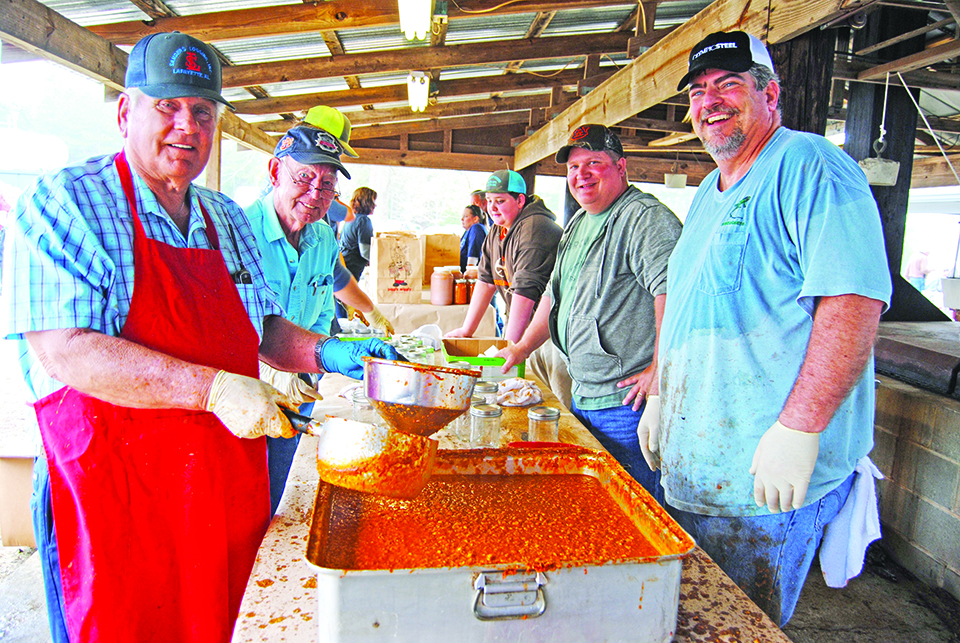 Wayne Clark | Times-News SERVING THE STEW: It takes a lot of people working together to make the Ridge Grove VFD barbecue a success each year. Above, Vinson Sanders and Wayne White (at left) and Jamie Yates and Jeff Plummer (right) put fresh, hot stew on every plate. There was another big crowd at Saturday’s event and with it being an election year, some candidates in the June Democratic and Republican primaries handed out cards and talked with people lined up at the fire house.

RIDGE GROVE, Ala. — The Ridge Grove Volunteer Fire Department in western Chambers County marked an anniversary on Saturday. It was the 40th year the department hosted a barbecue fundraiser. The first one was held in 1978 on a ball field directly across County Road 48 from the fire department building.

The ball field was adjacent to the site of the former Ridge Grove School, not far from O.D. Smith’s Grocery.

“It was a real windy day when we had our first one,” said Chief Tom Lovelace. “We had to really watch the stew that day.”

Lovelace is the third chief of the department. Bob Johnson was the first one and John Allen the second.

The barbecues have been important for the growth of the fire department. Ridge Grove VFD has six vehicles altogether, including two fire trucks that are worth over a half million dollars each. The money raised by the local department serves as a match with the bulk of the money for such purchases coming from the Department of Homeland Security.

The money raised in barbecues also goes to insurance, equipment and building improvements.

The department benefits from having two retirees living in the community. Retired chiefs from the Auburn and Opelika departments live in Ridge Grove and are available when the department needs advice.

“They have helped us a lot,” Chief Lovelace said.

There’s a lot of preparation that goes into having a barbecue. The cooking usually starts on the Thursday morning preceding Saturday’s noon hour serving time. This year, more than 2 tons of meat was cooked and 535 gallons of stew prepared. Chicken and Boston butts were cooked as well.

There’s some pre-work before Thursday and lots of planning throughout the year.

Each barbecue at the fire station draws hundreds of people from Chambers, Tallapoosa and Lee counties. The volunteer firefighters must be doing something right to keep those folks coming year after year.