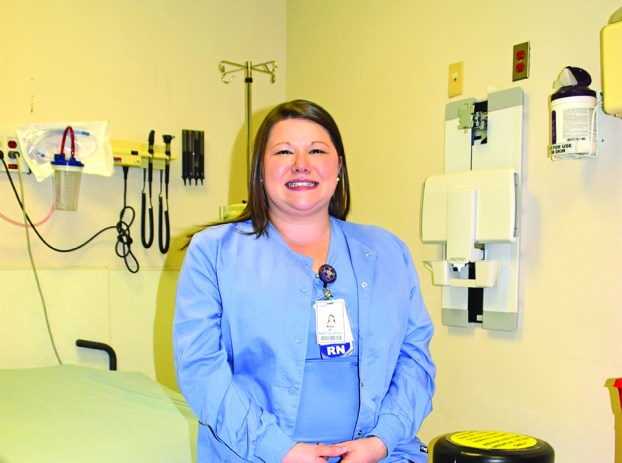 Steven Thomas | Times-News Living the dream: Hollie Story is living the dream. She wanted to work in healthcare as a child and is now and ER nurse at EAMC-Lanier Hospital.

For Story, working in the ER is a collaborative effort

VALLEY — There is a lot that goes into being a nurse but even more goes when in the ER.

Hollie Story is one of those registered nurses in the emergency department at EAMC-Lanier Hospital.

The difficulty of the job varies from day to day

“It can get pretty busy here,” she said. “Especially this time of the year with flu season and everything.”

It’s not an exaggeration to say working in medicine is a lifelong dream of Story’s.

“I was in an out of the hospital as a child,” she said. “I liked healthcare and decided to do nursing when I was older.”

She has been a nurse since December of 2011, all of that time at EAMC-Lanier.

That consistency is a positive for her.

“I’m not a big change person,” she said, noting she’s happy she stayed in her hometown.

Normally she works a 12-hour shift, three days a week. In that time it can get pretty busy. Most mornings, she said, are slow but by 9 a.m. things have picked up.

“That’s when we really get busy,” she said. “Then we’re busy until we leave.”

One of the big things about Story’s job is the fact she works on a team.

“Anytime we have a patient go bad or come in bad, we’re all like ‘Hands On Deck,!’” she said, noting usually the team works on one patient with one left to deal with anything else that might arise. “We do what we can.”

On the occasional slow day, Story transitions into more of an administrative role. She helps run chart audits and is a patient
safety officer for the hospital.

She eventually wants to get her master’s degree in education.

Outside of work, Story enjoys her time with her husband, firefighter Bryant Story, and their two children: 4-year-old Landon and 2-year-old Paisley.

In the end, Story is just happy she has a job she loves and a family to share it with.

“We provide quality care for or patients and the community,” she said. “We want the best for them.”