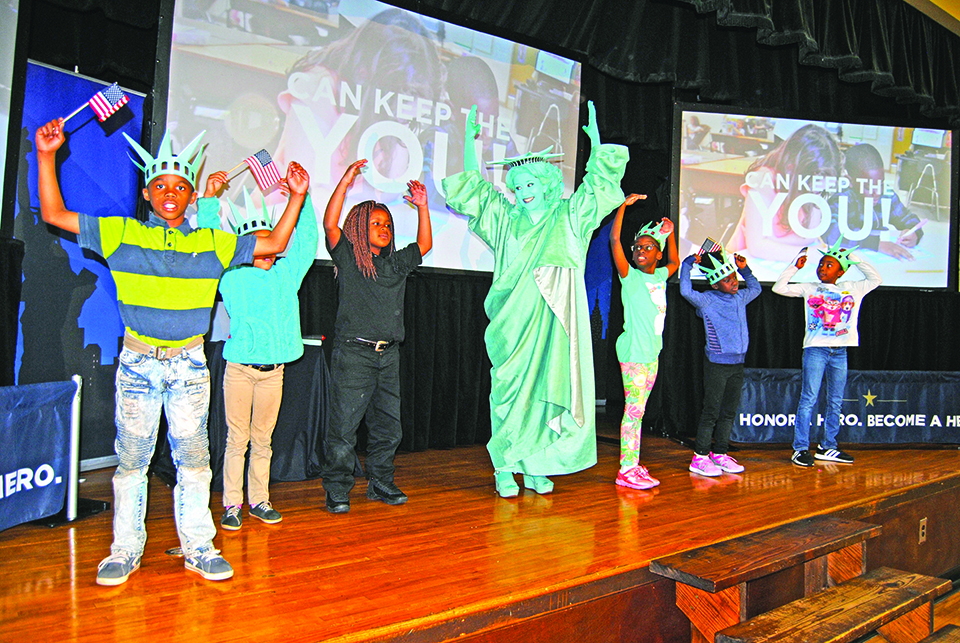 Wayne Clark | Times-News GETTING INTO IT WITH LIBBY: W.O. Lance Elementary students really got into singing “Only You Can Put the U in USA,” with Libby Liberty on Tuesday.

LANETT — The Liberty Learning Foundation brought its Next Great Americans bus to W.O. Lance Elementary School in Lanett, and star attraction Libby Liberty had the kids cheering, singing and clapping along with her high-energy program in the school’s multipurpose room.

The Learning Foundation wholeheartedly promotes the concept that today’s children will be the next Great Generation of Americans. Libby Liberty is a cheerleader for this cause. She represents our
country’s ideals, something powerfully expressed in the Statue of Liberty.

The children were amazed when she told them how big she is when she stands on her pedestal in New York Harbor. Her mouth is three feet wide, her nose four-and-a-half feet long and her fingers eight feet long.

After telling the kids that an estimated four million people come to visit her each year on Liberty Island, she told them that she’s in a lot of selfies. Turning the tables, she pulled out a selfie stick and took a photo of herself with the kids in the background.

Libby told them that anyone who climbs 354 steps can look out of 25 windows in her crown and get some impressive views of New York harbor. The seven spikes on her crown represent the seven seas and the earth’s seven continents.

She explained to the children that she hasn’t always been green. When she was born in 1886, she was copper colored.

“My outer layer is made of copper,” she said. “It isn’t very thick, about the width of two pennies stacked together.”

She now appears green because of oxidation taking place over a long period of time. She said she didn’t mind being green, but that Shrek has a prettier shade of green than she does. Lady Liberty bears the torch of freedom in one hand and a tablet bearing the date July 4, 1776 in the other.

Something many people don’t know is that there are some broken chains at her feet. “This symbolizes freedom from oppression,” she said.

Libby told the children that she was made in Paris, France under the direction of Gustave Eiffel. She was first on display in Paris, then crated up and sailed across the Atlantic Ocean to the U.S.

“I was packed in 214 crates,” Libby said, “sent across the ocean and then put back together like a jigsaw puzzle.”

There was a huge celebration when she was unveiled for the first time. Libby said that Alabama residents are in the middle of a three-year celebration. Alabama became a U.S. territory in 1817 and a state in 1819.

“You will get to celebrate a once-in-a-lifetime event next year,” he said.

Lady Liberty stands on Liberty Island in New York harbor. Nearby is Ellis Island, famed for processing millions of immigrants into a new homeland.

“Ellis Island was the first destination for people coming to the U.S.,” Libby said. “The world’s largest immigration museum is located on Ellis Island today. Those who left their homeland to come here had a long, hard journey ahead of them. They knew that when they saw land it was the promised land. When they saw that huge lady in green welcoming them many of them cried because they were so happy. They wanted to have freedom and a brighter future.”

Libby said that songs and poems had been written about her, one of the most famous being “The New Colossus,” written by Emma Lazarus.

Libby told the children that they would be learning all about being good citizens.

“I want all of you to be super citizens,” she said. “Remember that what you do is always more important than what you say. Super citizens are always respectful. They make a positive difference for their homes, their classrooms, and their schools. They make their communities better places to live. Good citizens do the right thing all the time. Good citizens always show appreciation to others. I want you to appreciate your teachers, your principals and your parents because they believe in you.”

Libby told the youngsters that she had been inspired by them.

“I will hold my torch higher when I get back home to my pedestal,” she said. “I want you to remember that only you can put the U in USA.”