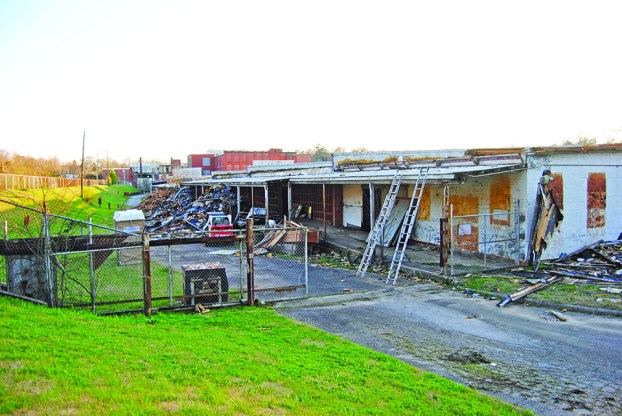 Wayne Clark | Times-News LANGDALE MILL COMING DOWN: Demolition is under way at Langdale Mill in Valley. It has started at the warehouses on the north end and will proceed toward the historic portion of the mill on the south side.

VALLEY — The demolition of Langdale Mill is under way. It’s something a lot of local people have dreaded for a long time. It’s the last remaining link to the Valley’s textile past. It’s also one of the oldest textile mills still standing in this part of the country and the only one still left on the middle portion of the Chattahoochee River.

Until recently, the City of Valley had owned the property since purchasing it at auction in 2004. The city went to great lengths in finding ways to repurpose the historic building to new uses. A lot of good ideas were considered but they all came to the same dead end – no investor would provide the money to get it done.

Several weeks ago, the city sold the property to the Henry Hudson Company, an Opelika-based firm that’s heading up the demolition of the Riverdale Mill property.

The company is owned by brothers John and Thomas Bush. They also own Zaxby’s and Steak ‘n Shake on Fob James Drive and a flooring company off River Road. The heart pine timber that’s coming out of the mill is going out into the world in hundreds of new homes from this warehouse on Valley’s south side.

The demolition of Langdale Mill has started in the warehouses on the north side. These structures date to the 1930s and 1940s and have a lot of wood, brick and metal that can be recycled. It will take some time to get to the historic part of the mill that was built
in 1888. The is where the really valuable material is.

The Bush brothers told The Times-News that they love history and would love to preserve the 1888 part of the mill, but it would have to have a practical purpose and something someone would be willing to invest in.

There have been successful mill redevelopments, but they are usually in more densely populated areas than the Valley and areas with higher per capita income. Investors are much more likely to take risks in such areas.

The historic mill buildings along the Chattahoochee in Columbus are ideal examples of this. It cost a lot of money to get this done, but the parties that took those risks are getting their money back through elegant apartments and successful businesses, right beside a world-class whitewater course. The Columbus-Phenix City metro area has more than 300,000 people. That’s about 10 times the population of Chambers County.

To their credit, city officials in Valley left no stone unturned in looking for some way to preserve Langdale Mill and to find new uses for it. Unfortunately, it was something that couldn’t be done.

LANETT — Anyone who caught sight of a pink bus in Lanett on Tuesday should know that it’s not just... read more