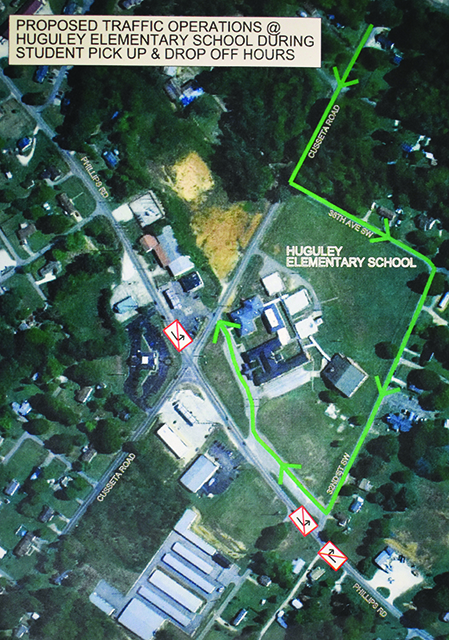 Submitted Photo | Times-News PROPOSED TRAFFIC ROUTE: The Chambers County Commission is considering adopting the above traffic plan for the dropping off and picking up of school children at Huguley Elementary School.

LaFAYETTE — An action item that was on Monday’s agenda was tabled by the Chambers County Commission to give Huguley residents who might be adversely affected by it an opportunity to attend a public hearing and have their say.

At stake is a proposed traffic plan to have a better traffic flow in the mornings and afternoons when school is in session. The proposed rerouting would take place on school days from 7:15 to 8:15 a.m. when students are being dropped off and 2:30 to 3:45 p.m. when they are leaving. Sheriff’s office deputies would be there to help ensure a one-way traffic flow.

According to the plan, all school traffic would have to approach Huguley Elementary School from the north along Cusseta Road and turn onto 38th Avenue SW, then onto 32nd Street SW and then approach the school along the extended driveway next to the ball field. The purpose of this is to keep traffic off heavily-traveled Phillips Road.

If approved, the plan could go into effect as soon as April 30th.

What it all means is that during a one-hour period in the morning and a one hour, 15 minute period in the afternoon, people heading south along Phillips Road cannot make a left-hand turn onto Cusseta Road or 32nd Street SW and anyone heading north on Phillips can’t turn right onto SW 32nd Street.

Commissioner Debbie Wood asked for the delay in order to have a public hearing. “People who live in the area deserve enough respect to know what’s happening,” she said. “They should be notified of this before we make a decision.”

County Engineer Josh Harvill suggested sending letters to those who live in the area and having a public hearing at the school to discuss what’s going on and why.

“It’s a good plan, but we need to tell people about it,” Wood said.

Commissioner David Eastridge backed Harvill’s suggestion of getting out letters and having a public hearing at Huguley Elementary School.

Sheriff Sid Lockhart said that it had been his experience that no one liked change. He said there had been some negative feedback when traffic patterns had been changed at W.F. Burns Middle School and at Fairfax Elementary School.

“When they get used to it, they like it,” he said.

For some time now, there has been a traffic congestion problem in the mornings and afternoons at Huguley Elementary when children are being dropped off and picked up. School and county officials have studied this problem for some time now. The eventual solution is to widen Phillips Road to have adequate turning lanes. That will be taking place in the next year.

The date and time for the public hearing will be announced in advance.

Another item that was tabled involved a proposed topographical survey for the Chambers County jail. The project architect, PH&J of Montgomery, had planned for this to take place and they were intending to have the site surveyed.

On another topic, McCoy said that the county was making significant progress in getting its audits up to date. Having current audits makes it more advantageous for local governments to borrow money or enter into bond financing.

McCoy told the commissioners that Chambers County would be a party in the opioid lawsuit that is being filed this week in U.S. District Court. Opioid addiction, said McCoy, is a serious problem not only in Alabama but all across the U.S.

“This has to be addressed,” he said. “Lots of cases could come from this.”

The ongoing trend is for opioid-related cases to be consolidated into one case that will be heard in federal court in Cleveland, Ohio.

“We will have a voice in this,” McCoy said. “Those who don’t get in on it early could be part of a class-action suit that follows, They usually don’t get any money that way.”

Those who joined the tobacco lawsuit in the late going wound up with the short end of the stick. Getting in on the opioid lawsuit early would avoid that.

In other action on Monday, the commission approved the purchase of some equipment needed by the Highway Department. These purchases had been approved in the annual budget. They include a Takeuchi TL12V2 skid steer costing $76,101, a Branco 84-inch hydraulic boom costing $7.101 and a single discharge FH-R road widener costing $43,939,

Harvill said that County Roads 281 and 282 had reopened following some pipe replacements on creeks and that more work on drainage improvements would be taking place on both roads.

Harvill said that the road closures had been planned in advance.

“We looked at the pipes months in advance,” he said. “We were not caught off guard by this.”

Harvill said his departments fill in potholes every month of the year.

“We get behind in the winter when we can’t use our one-man pothole patcher. We can do more patching in the warm weather months. Tar will not stick to a road in cold weather. It has to be warm. We patch potholes by hand in the winter months. That’s a slower process.”

In a unanimous vote, the commission reappointed Jeremy Johnson to the Chambers County Development Authority Board of Directors.