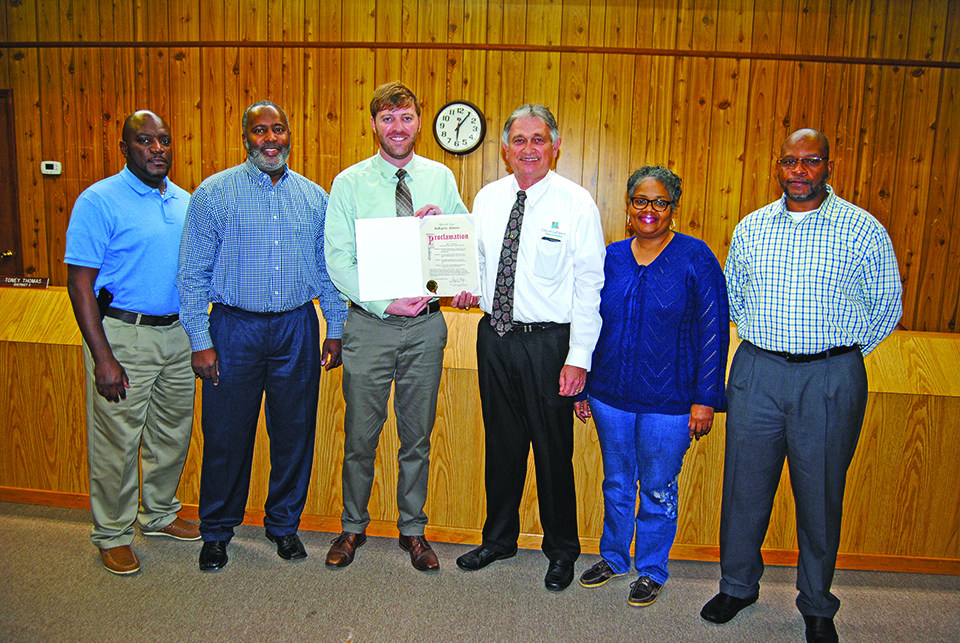 Wayne Clark | Times-News CITY BACKS LaFAYETTE DAY: At its Monday meeting, the LaFayette City Council approved a proclamation promoting LaFayette Day 2018. The 21st annual LaFayette Day will be taking place on Saturday, April 14, on Court Square in the downtown area. This year’s fundraiser for Valley Haven School will have a car show, a motorcycle ride, volunteer firefighter competition and live entertainment all day. Receiving a copy on behalf of Valley Haven School was Chris Busby (at center). On the left are Council Members Mike Ellis and Neal McCurdy; at right are Mayor Barry Moody and Council Members Tammie Williams and Toney Thomas.

LaFAYETTE — The LaFayette City Council on Monday approved an altered lease agreement for the Quality of Life, a health center located on the south side of town between Jack’s and Lowe’s Pharmacy.

Rather than having an annual lease on the building, it will be on a month-to-month basis. This is being done because officials with the clinic are considering relocating to another building in LaFayette.

Mayor Barry Moody said that he’d like to have the building occupied but the main issue for Quality of Life is that it remains at some location in LaFayette.

Quality of Life is a federally-funded, community-based health center. Its goal is to improve access and to provide comprehensive, high quality health care services to underserved areas and individuals. Its staff includes a doctor, a nurse practitioner, dentist and behavioral health specialist. They work with all individuals, including those who do not have health insurance or limited health insurance. They also assist people with co-pays.

City Attorney Mac Tucker told the council that he could see no reason for the city not to support the opioid law suit. The Chambers County Commission has announced its intentions to be a party to it.

The council approved one claim and denied another one. They agreed to pay Annie Ruth Hinkle and Shirley Koulianos $250 for damage to some grave markers in the
city cemetery. City officials conceded that the damage was likely done in a grass cutting operation.

A claim made by Antonio Jones was denied; Jones claimed that his big-screen TV received significant damage when a transformer blew near his home. The problem with the request is that the incident happened in early September, which is outside the six-month time frame to file claims against the city.

The council approved an off-premise retail beer and wine license for the Stop N Shop convenience store, located on North LaFayette Street. The business was formerly known as Eagle Chevron. The request was made by Asima Khalid, the owner.

City Clerk Louis Davidson said that city utility customers have until April 9th to pay their power bill for the month of March. The April bill will be on the normal cycle; it will be due on April 26th.

For the past two months, the city spaced out the bills because of some extraordinarily high bills in February.

Council Member Michael Ellis asked fellow council members to look at what nearby Clay County did in converting an existing building to municipal use. He said that a former bank building in Ashland had been converted into a new city hall complex.

LaFayette has plans of converting the former McClendon building in the downtown area into a new city hall complex.