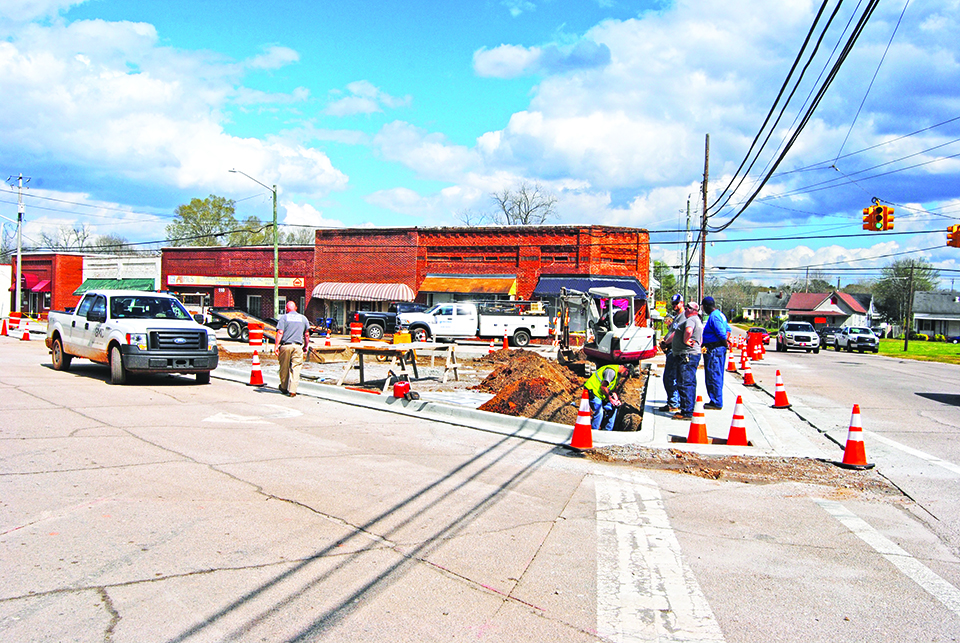 Wayne Clark | Times-News BOTTOM END OF THE TRIANGLE: Lanett city workers have been busy in recent days building a new triangle in downtown Lanett. It’s going to be wider and longer than the former one. “It’s going to have more flowers, and we think it will have more character,” said Mayor Kyle McCoy.

LANETT — On Monday evening, the Lanett City Council heard a presentation on the advantages of taking part in the Main Street Alabama program.

Tricia Black of Main Street Alabama and Chris Busby of the Chambers County Development Authority had a PowerPoint presentation highlighting what participation in the program can mean for member cities.

Main Street Alabama focuses on bringing jobs, dollars and people back to historic Alabama communities. Economic development is at the heart of its efforts to revitalize downtowns and neighborhoods. Main Street Alabama provides a tiered program of services to help communities to organize themselves for success, improve design of their neighborhoods, promote their districts and enhance their economic base.

Black was with the Main Street program in Athens, Ala. for eight years and has been with the statewide organization for the past two years.

The Alabama Municipal Electric Authority, of which Lanett and LaFayette are members, is proactive in their support of Main Street Alabama. They pay the $500 membership fee for AMEA members to participate for the first year.

Mayor Kyle McCoy and members of the council described Main Street participation as taking the next step following the ongoing streetscape project.

“It just doesn’t make a lot of sense to put up the nice streetlights and sidewalks and then not do anything else,” said Council Member Tony Malone.

Busby said that it takes a lot of hard work on the part of cities to become a full-fledged participating member of Main Street Alabama.

“Perhaps we can get a board organized to get the ball rolling,” he said.

McCoy said city residents look at the example of Opelika.

“Main Street has worked for them,” he said. “Ten years ago their downtown area was dying. There were abandoned buildings everywhere. West Point has had a major turnaround with organizations like West Point 2100 and the Downtown Development Authority playing parts in it. The streetscape is good, but we need a road map to reinvest back in the city.”

Black said that she falls in love with every Alabama city she goes to and wants to help them have the best downtown they can have. She said the best experience Main Street participants have is that they network with other Alabama towns who are redeveloping their downtown areas and
that it’s a fantastic opportunity to share ideas on what works and what doesn’t.

“Part of the program is that we can help change negative perceptions that people may have,” she said.

Every city has its unique assets. For Lanett, West Point and Valley it’s the Chattahoochee River and West Point Lake.

Black cited the example of Heflin, Ala., which now has a Bigfoot Race that attracts people to Cleburne County. There have been dozens of reported bigfoot sightings in the area. If it’s something that gets people to come to your town and spend a few dollars is it all that bad? Besides people could like the area and come back to go camping and stay for a few days.

Some towns encourage local artists to make public displays of their works. In Monroeville, Ala. for example, hay bales have been painted to resemble giant spiders trudging down the street and artists in Dothan like to have giant eyeballs in the downtown trees.

Through Main Street Alabama, local communities can learn to do things that can make their downtown areas fun destinations for local people to hang out and for out-of-town visitors to come and see.

“We encourage you to have a sense of economic vitality,” Black said. “We want you to understand what kinds of businesses are going to work. Loft apartments have gone over really well in Russellville, Ala. They got out the word about it and all of them were quickly leased out. Fort Payne has had success with a Lunch N Learn program.”

Black said that Main Street is a volunteer-driven organization.

“Downtown is something everyone can get behind,” she said. “They want their downtown area to be better.”

Council Member Angelia Thomas asked Black if there was a difference between what Main Street tried to do and what the local Chamber of Commerce was doing. She said they were complimentary, not competitive, organizations. She compared it to the medical field.

“A chamber of commerce is like a general practitioner and Main Street like a cardiologist,” she said.

Thomas asked if people needed to volunteer to take part.

“You have to get everyone to buy in,” Busby said. “It’s a road map to get to where you would like to go. It’s a low-risk situation for the city, but you will need citizen participation. There’s a lot everyone has to learn on this, but it’s a starting point.”