Lanier High alumni have an enjoyable get together 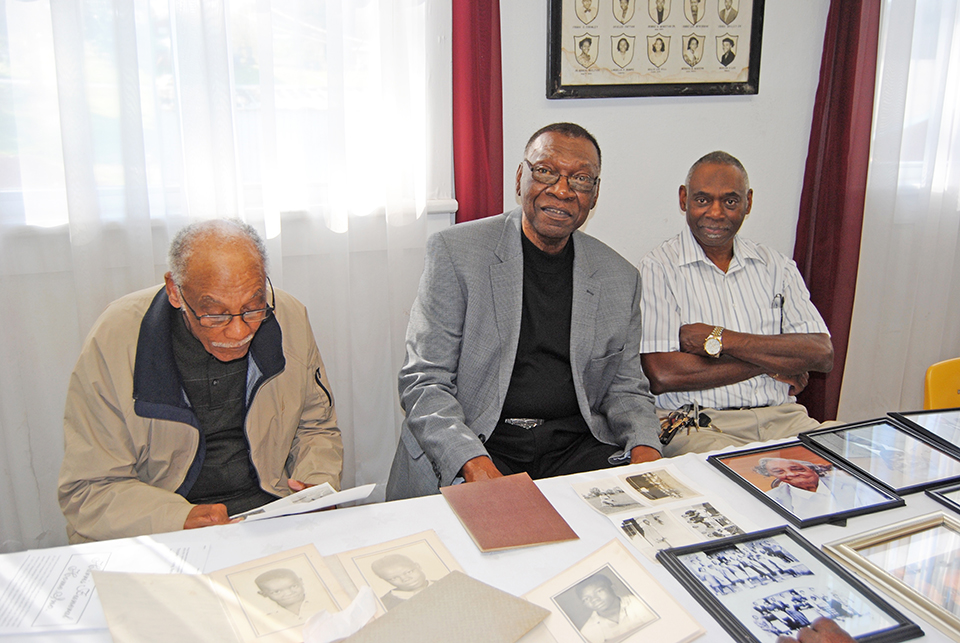 Wayne Clark | Times-News OLD SCHOOL MEMORABILIA: On Sunday, Lanier High alumni enjoyed looking though lots of old photos and recalling the days when they were in school at Lanier. It was part of an afternoon tea sponsored by the Lanier High Historical Society. They met in the former Home Economics building, which is the oldest part of Lanier High that’s still standing. From left, are Harold Toles, Franklin Stiggers and John Nelloms. At one time, Mr. Stiggers was a member of the Lanett City School Board.

LANETT — There was a very good turnout at Sunday afternoon’s reunion of Lanier High alumni and friends of the school held at the L.B. Sykes Community Center. The large conference room area inside the former Lanier High home economics building was just about filled to capacity.

Former classmates thumbed through school yearbooks, looked at old newspaper clippings and saw lots of black and white prints from the good old days. There were lots of smiles, good conversation and with it being on a Sunday afternoon, some really good Gospel solos.

There was reminiscing about the days in school and remembrances of classmates who are no longer with us.

Lanier High has quite a legacy in Lanett.

In the pre-integration era, the school was located at three different sites on Cherry Drive. Its first location was near Goodsell Methodist Church and was commonly called the Blue Hall. Later, it was moved to the Dallas/Jackson Home and was known as the Jackson Hill School.

In 1921, West Point Manufacturing Company President George H. Lanier provided funds for a new school, and the name was changed from the Jackson Hill School to Lanier High.

Lanier was accredited in 1935 and six seniors received diplomas in a graduation ceremony that year. Soon after that, in 1937, the Darden family donated land for a grades 3-12 building on the present site of the Community Center. Later on, a home economics building and a shop were added. The home economics building, a two-story classroom section, a cafeteria and the James A. Hardy gym are portions of the school that closed in 1969 that still stand and are in good use. The blue roof building was added in the early 2000s and serves as part of the Community Center complex.

The text of an historical marker just outside the home economics building reads: “Until 1959 Lanier High was the only school in the Greater Valley Area that conferred high school diplomas to black students. Reuben Dallas, S.Q. Bryant and L.B. Sykes were the principals who served from the 1920s to 1969. System wide restructuring resulted in Lanier High losing grades 7-12, and in 1970 it became Lanett Junior High with grades 6, 7 and 8. The school was accredited in 1974. The Lanier High building was demolished in 1991, leaving the Home Economics building as the only remnant of the school.”

Cobb Memorial Archives has some interesting items on Lanier High, one of them being a local newspaper article from the late 1930s. It recounts a visit made by a prominent person to Lanier High. Dr. George Washington Carver, then an internationally famous scientist, was taken on a tour of the school by Principal S.Q. Bryant.