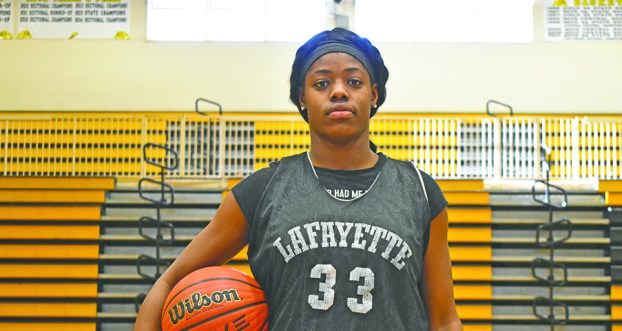 League of her own

LaFAYETTE — She posted exorbitant numbers. She took over games. At times, she appeared unstoppable.

During the basketball season, the LaFayette High ninth-grader showcased poise, skill and instinct in pacing the Lady Bulldogs to their most successful season in Michael Bratcher’s eight-year coaching tenure.

That is why Greer, who averaged more than 18 points and 18 rebounds per game, is the 2017-18 All-Valley Girls Basketball Player of the Year.

Her method to success?

“I just played,” said Greer. “It wasn’t different than junior high for me.”

The pithy explanation spoke for itself. Every time Greer stepped on the floor this winter, she exhibited a natural feel for the game.

She corralled rebounds with tenacity, intercepted passes with consistency and dribbled through traffic with precision.

“She brought a physical presence to the game and to the team,” Bratcher said. “There are little things that she does for the team that you can’t really coach or teach.”

Greer played in a hybrid “point-forward” role for the Lady Bulldogs. She brought the ball up court when LaFayette faced full-court pressure but swapped to center in half-court situations.

At 5-foot-7, Greer was often overmatched by taller players in the paint. But she didn’t use her height disadvantage as an excuse.

Frequently, she neutralized opponents’ top post threats. LaFayette lacked that ability in the past.

Greer rose to the occasion when her team needed her the most. In the Class 2A, Area 8 tournament final, she scored 23 points in a 53-44 upset victory at Lanett.

Her performance helped the Lady Bulldogs capture their first area crown in nine years, which allowed the team to a host a sub-regional playoff game. There, LaFayette lost to eventual state runner-up Sand Rock. But Greer didn’t let that ending define her first year of high school basketball.

“It was a great season,” she said.

Three more could be on the horizon.

Greer already has started competing for the LaFayette track and field team. She placed third in the shot put at the Class 2A state meet last spring, when she was only an eighth-grader.

LaFayette’s victory over Lanett in the Class 2A, Area 8 final carried extra meaning for Greer. She moved to LaFayette from Lanett last school year.

Amaya Battle, Sr., Springwood School: The Lady Wildcats’ top scorer tallied more than 12 points per game while playing on the wing. She also averaged  3.9 rebounds and 1.4 assists as the leader of a team that finished the season 14-7.

Makyia Broughton, Jr., Lanett: The dynamic guard provided a spark for the Lady Panthers on a nightly basis, averaging 15 points and eight assists per game. She displayed a knack for attacking the rim.

Alyse Madden, Fr., Lanett: The 5-10 forward-center did most of her damage in the paint, averaging 12 points and 12 rebounds per game. But she wasn’t afraid to show off her smooth shooting stroke when given an open look.

Ana Magby, So., Valley: The 5-7 guard averaged 12.8 points, 6.2 rebounds and 2.7 assists per game. She played with energy, defensive intensity and composure.

Jasmine Pitts, Sr., LaFayette: The 5-6 guard poured in 17 points per game, bringing her four-year total to 1,236. She also averaged more than six assists.