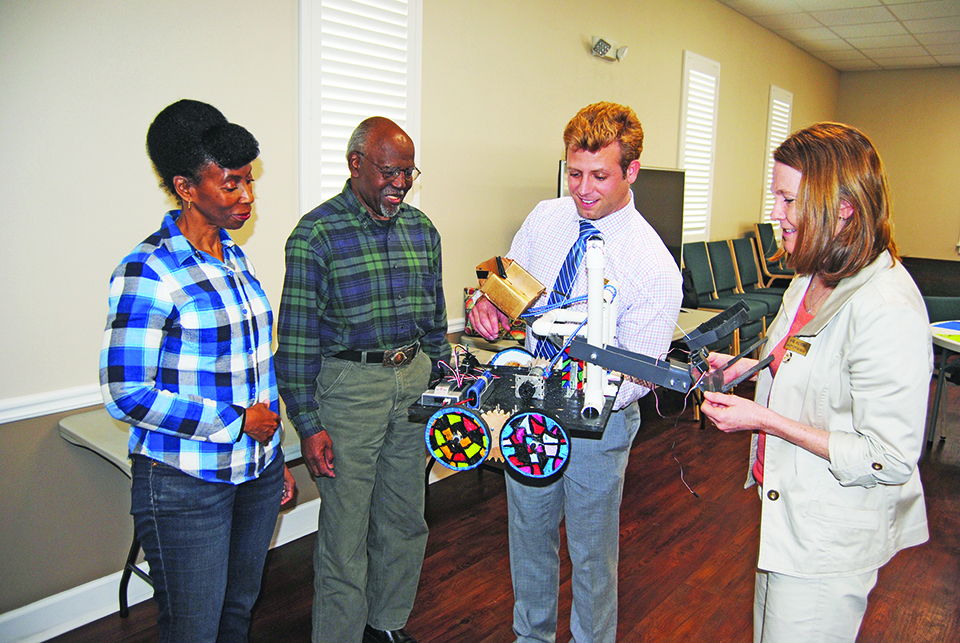 Wayne Clark | Times-News EXPLAINING A ROBOT : Lanett STEM instructor Mary Anderson and robotics team coach Bryant Lumpkin explains to Bill and Theresa Fannings (at left) what the above robot creation was tasked with doing at this school year’s competition at Auburn University.

WEST POINT — West Point Lions Club members on Wednesday heard presentations from two Lanett teachers on how STEM education isn’t something today’s students take because they have to; they take it because it’s fun.

Talking about how well science, technology, engineering and math is going over in the classroom were Mary Anderson, the enrichment/STEM teacher at the elementary and junior high levels and Bryant Lumpkin, the LHS assistant principal, graduation coach and robotics team adviser.

Lumpkin said there’s a six-week period from early September to mid-October that’s robotics competition season. The task if for students to build a robot with materials that are supplied to them and have it perform tasks in a competition with robotics teams from around 25 high schools around the state. The competition takes place at Auburn University before a large crowd of spectators.

“We had to build a firefighter robot this year,” Lumpkin said. “It was kind of like a video game in that it was driven by a hand-held controller.”

The robot moved around on four wheels and had a catapult that could hurl ping pong balls toward a row of elevated cups that represented a fire that was under way. The ping pong balls that hit the cups were the equivalent of streams of water hitting a fire and putting it out. The robot also had the task of rescuing an injured person and removing any barrels of hazardous chemicals.

“It’s a lot of hard work to get ready for the competition,” Lumpkin said. “The competition is the fun part. The kids really get into it.”

In assembling a robot from scratch, the students do all the work themselves. This involves cutting four perfectly round wheels from a sheet of plywood. If the wheels aren’t perfectly round, the robot will wobble as it moves, and that’s not good.

“We have a different task to perform each year,” Lumpkin said. “It’s usually around picking up stuff. We have a theme in what we do: ‘We don’t think outside the box, we think of ways to use the box.’”

Anderson said that STEM education begins at the kindergarten level.

“They have weekly film labs and what they will be doing later on,” she said. “STEM is a process. It has lots of hands-on things that kids really love.”

Today’s classroom is very different from those of a generation ago.

“We have had to change because the world has changed,” Anderson said. “STEM teaches the 21st century skills that employers are looking for. Today’s students are becoming acquainted with today’s real-world problems in the classroom.”

In elementary school, students in STEM classes experiment by building small bridges. “They learn a lot in the process,” Anderson said. “They have a variety of different challenges to overcome. There is week-by-week problem solving, lots of exploring, manipulating variables, testing and collecting data. They are learning to apply grit and resilience in making it better.”

One learning exercise involves flying straw rockets. They are in three different sizes, and the task is to build ones that can hit targets that are from five to eight meters away.

The fifth grade students compete in jet toy competition. A 12-member team from W.O. Lance went to a competition in Atlanta earlier this year and brought home medals. The Lanett team was one of several teams from the Greater Valley Area who went to the competition courtesy of Kia Motors Manufacturing Georgia, which covered the expenses.

Anderson said the most important thing for the kindergarten students is for them to learn to work together. Mastering this early, she said, will pay off in a big way when they are older.

“It will help them learn at a more advanced level by the time they are in high school,” she said. “They will learn that there’s always more than one way to solve a problem.”

Kia is also very supportive of helping local students compete in Science Olympiads. In one of these recent competitions, students were asked to design and build a capsule that would keep an egg from breaking when dropped from a certain height.

“It helps form a solid foundation while cultivating a lifelong appreciation of science,” she said.

Lumpkin described robotics as shop class on steroids. “We have been doing it for five years now,” he said. “We are very fortunate to be able to do this. It can be overwhelming at times, but it is a good experience for the kids.”

Lumpkin thanked C&C Metal Fabricators of Huguley for cutting, bending and shaping sheet metal at no cost. This really helps in building the robot.