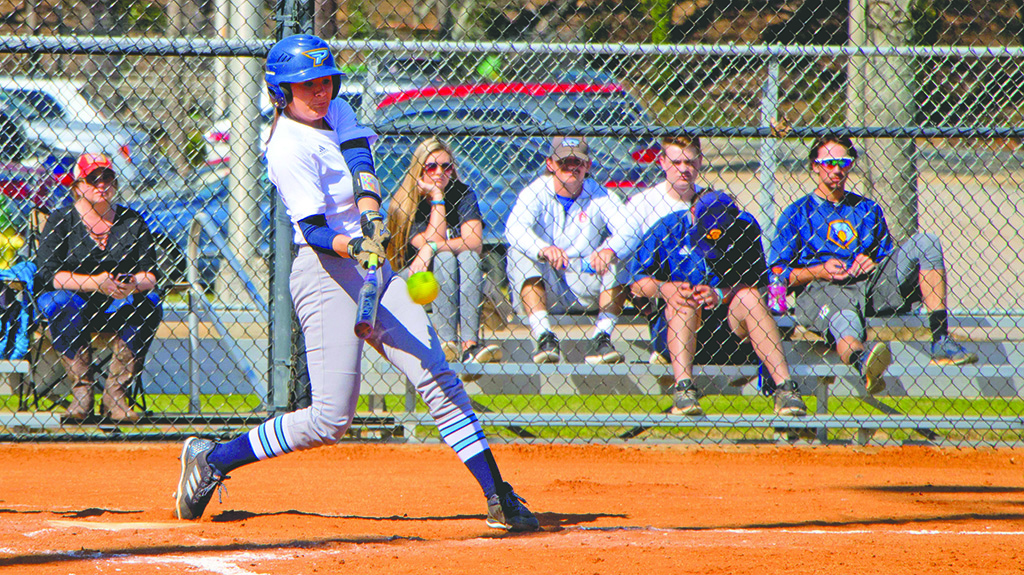 Point University senior Madyson Brown has been nearly unstoppable at the plate. After starting the season in a slump, she has tallied hits in the past 13 games. (Submitted Photo | Point Athletics)

The Skyhawks totaled a 31-22 record and went 12-8 in the Appalachian Athletic Conference.

This year, Tyler’s squad is on pace to match or surpass at least one of those marks. The contributions of Valley High School alumni are a big reason why.

“Growing up together and already having friendships before they got here helps them,” said Tyler, the Skyhawks head coach, “but it helps the team, too, because they kind of start the foundation. Then, the other girls join in.”

Brown and Williams are seniors; Simpson and Striblin are juniors, and Davis is a sophomore.

Each followed a different path to the same destination, despite its close proximity. Only a 6-mile stretch of U.S. Highway 29 separates the campuses of Valley and Point.

She spent her freshman and sophomore seasons playing for CVCC before transferring to Point last school year.

That’s when she reconnected with her former Valley teammates.  Striblin transferred in at the same time from Georgia Southwestern State, and Williams had been at Point since the second semester of her freshman year, in 2015.

Simpson and Davis both committed to the Skyhawks program while in high school. Each player had her own reason for choosing Point.

But size, location and familiarity all factored into their decisions.

“With the people at Point, it just feels like home,” Williams said.

The Valley alums have made the program their own since their arrival. Now, they are reaping the dividends of their investment.

None more so than Brown.

She has won the last two conference player of the week awards.

“My teammates are really encouraging and they stayed behind me the whole time,” Brown said. “Coach Tyler and Coach [Sarah] Warren still had confidence in me after that slump, so everybody helped me through it. Once I got going, it was all up from there I guess.”

Simpson also has excelled in her role. The Skyhawks’ top pitcher is 12-5 on the season and has tossed 10 complete games. She boasts a 1.75 ERA.

“I know our defense is behind me,” Simpson said. “That’s our really, really strong point.”

Whenever Simpson steps in the circle, she throws to a trusty backstop in Williams.

Striblin, meanwhile, holds down the hot corner. She also hits cleanup in Point’s batting order and owns a .304 batting average with 15 RBIs.

“Lacy’s in the four hole, Mady’s in the five hole, so we look to them to score the runners basically,” Tyler said. “If Ryan’s hot, then we have a chance in any game.”

The Skyhawks (18-16, 10-4 in AAC) have won three of their last four contests and are third in the AAC standings. Conference play will continue for the next month as the season builds toward the AAC tournament in late April.

That’s when Point will strive to be at its best.

“If we just keep playing our game and doing our thing and keep our heads up, it will be good,” Brown said. “We’ll go a long way.”