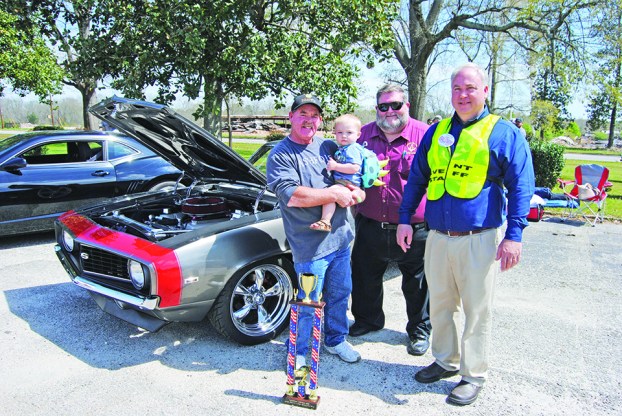 LANETT — Lots of local people enjoyed Saturday’s beautiful weather to check out some exquisitely restored vehicles at the fourth annual spring car show sponsored by Lodge No. 656, Free & Accepted Masons, Lanett. A total of 51 vehicles were on display in a parking lot across from the Lanett Mill site.

The top two award winners were a 1948 two-door Mercury coupe owned by Rocky and Fran Jackson of Opelika and a 1969 SS Camaro owned by Thomas Ray of Ashford, Ala.

“There’s lots of beautiful cars here today,” said Barry Smith, worshipful master of Lodge No. 656. “It’s obvious that a lot of hard work went into reconditioning them. I’m sure it was a labor of love for the owners.”

The Jacksons got their Mercury coupe from South Carolina and had it transported back to Alabama. “We worked on it six or seven months before we started driving it,” said Rocky Jackson. “It drives great, just like a new car.”

Wife Fran said people are always craning their necks to the a good look at the car when they are out driving it around.

“We like coming to the car show in Lanett,” said Rocky. “We have been here three times and taken home two trophies.”

Ashford, Ala., is not far from the Florida state line, but Thomas Ray went home Saturday afternoon feeling it had been well worth the trip to Lanett, given that his ’69 Camaro won the Master’s Choice award. Ray said that he enjoys taking the car to car shows and talking to people about his pride and joy. The car might finish a close second to one-year-old grandson Colten Ray as his main joy in life.

Scott Willingham, owner of Scott’s Towing, had two “Smokey and the Bandit” cars in the show. One was a 1975 Pontiac LeMans that was reconditioned to look like the Montague County Sheriff’s car driven by Sheriff Buford T. Justice (played by the late Jackie Gleason) and the classic Pontiac Trans Am driven by “the bandit” (Burt Reynolds) in the 1977 movie.

There was a money tree at the car show, and some of the attendees won a couple of $100 bills and a couple of fifties. There were also some $25 cash prizes given out during the day.

“We were very pleased with the turnout,”said Barry Smith. “I think we had four cars in our first show. Now we are getting at least 50 classic cars every time we do it. It helps us raise money for scholarships we award to deserving high school graduates of Lanett High and Springwood High. We are also raising money for a building fund.”

Wildcats down Emmanuel with goal avalanche