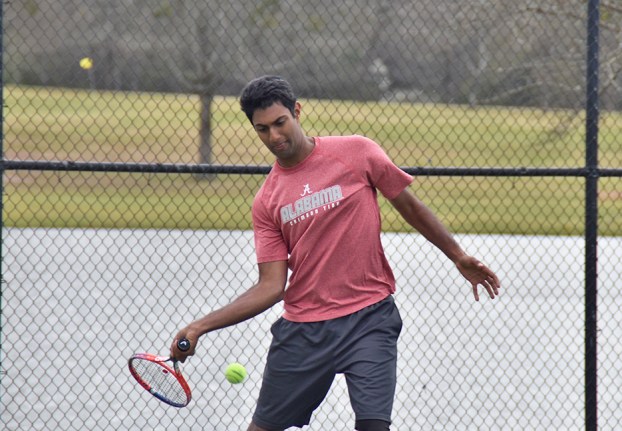 Springwood School senior Ananth Reddy is undefeated this season in the AISA. He will vie for his first state title at April's state tournament. (Photo by Sam Chandler)

LANETT — In a few months, Ananth Reddy will depart for Georgia Tech University. Already, the Springwood School senior has secured his spot in the Class of 2022.

Reddy plans to study aerospace engineering during his Yellow Jacket career. One day, he hopes to design rockets for a group like NASA or SpaceX.

In the meantime, however, Reddy is focused on the rocket that resides in his right shoulder, the one that enables him to blast serves in excess of 115 mph.

Reddy, the top player on the Wildcats boys tennis team, has not dropped a singles match all season against Alabama Independent School Association competition. He is aiming to preserve his blemishless record through the end of the AISA state tournament, which begins April 9 in Montgomery.

“I guess everything’s just been leading up to this moment, really,” he said.

Reddy burst onto the AISA tennis scene as a middle schooler and has since helped the Springwood boys clinch seven consecutive state tournament appearances.

Oswald remembers each trip, though one occupies an abiding spot in his memory. It involved a middle-school-age Reddy dueling with the state’s top-ranked 18-year-old as hundreds of spectators marveled.

Reddy was outsized and overpowered, yet somehow managed to win the first set of a narrow three-set defeat.

“He just kind of ran out of juice,” Oswald said. “But he made a name for himself. There’s not a coach in the AISA that doesn’t know who Ananth Reddy is.”

Reddy’s precocity foreshadowed years of success at the high school level. He has lived up to his potential.

“Obviously the losses don’t feel good, but they help you get better,” Reddy said. “You learn from your losses.”

He plans to put his knowledge to use during his final state tournament. The 6-foot-4 Reddy will strive to play consistently, limit his mistakes and lean on the power of his serve and forehand.

He also will do his best to maintain composure.

Reddy has grown up a Roger Federer fan and values the pro’s unshakable demeanor.

“That’s one part of the game I guess I try to imitate,” Reddy said, “because he’s calm on the court.”

Opponents haven’t been able to rattle Reddy this spring. Oswald said his pupil is playing the best tennis of his career.

At state, he’ll be ready to launch.

“I expect him to be back in the final,” Oswald said.  “Hopefully he will pull that off.”

LANETT — Kristian Story will trade Lanett High School black and gold for Tennessee orange.   But not for a... read more