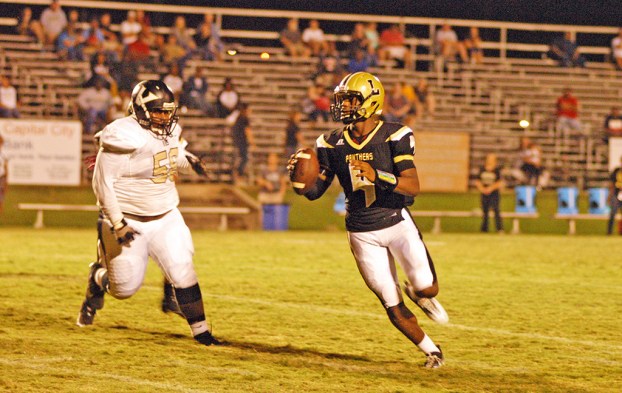 Lanett High School quarterback Kristian Story (4) verbally committed to the University of Tennessee on Thursday while on an unofficial visit. He helped lead the Panthers to the Class 2A state title last season. (Times-News file photo)

But not for a few years.

On Thursday evening, the Panthers starting quarterback verbally committed to the Volunteers football program while on an unofficial visit to the University of Tennessee-Knoxville campus.

He became the first player in the Class of 2020 to commit to first-year head coach Jeremy Pruitt, the former defensive coordinator at Alabama.

“It feels good to be considered a leader of this 2020 class,” Story told The Valley Times-News on Friday. “[Pruitt] and the people he has around him, I think that they’re going to be pretty good.”

Story announced his intentions after spending a full day at the university with his family. His father, Clifford, mother, Kristina, and brother, Caden, all joined him on the trip.

The group toured the campus, explored the athletic facilities and observed one of the Volunteers’ spring practices.

Kristian Story also had a chance to meet with Tennessee coaches, including Pruitt and Charles Kelly.

Kelly is the team’s new special teams coordinator/safeties coach, and Clifford Story knows him well. Kelly coached the elder Story when he was a tight end at Jacksonville State University in the 1990s. Thursday’s visit allowed the two to reconnect.

It also provided Kristina Story a chance to check out the campus. Kristian and Clifford Story made their initial trip to Knoxville in early March for Tennessee’s Junior Day recruiting event. The school left such an impression that Kristian Story felt compelled to come back during spring break.

“This time it was just about getting my mom up there so she could see it too,” Kristian Story said.

Kristian Story decided to pledge to the Volunteers before completing his visit. He said the facilities, atmosphere and new leadership sold him.

“Last night, when we were getting ready to leave, he had a big smile on his face, and he said that he wanted to commit,” Clifford Story said. “That’s where he said he wants to be. I just told him I support him 150 percent, and I want what’s best for him.”

Tennessee is recruiting Kristian Story as an athlete, meaning he could play any number of positions at the college level. That includes wide receiver, defensive back or quarterback.

As a sophomore last fall, Kristian Story completed 144-of-221 pass attempts for more than 3,300 yards and a school-record 42 touchdowns. The 6-foot-2, 207-pound signal-caller added 900 yards rushing and nine touchdowns while helping lead Lanett to the Class 2A state title.

Kristian Story, a consensus four-star recruit, was named to the All-State first team following his stellar season. He also was selected to the MaxPreps Sophomore All-American Team.

Clifford Story, who is the Panthers head football coach, said that Pruitt complimented his son’s tools at quarterback and indicated the role could be a viable match at Tennessee.

“I was telling Coach Pruitt that he played quarterback for me, but he’d never been taught the game at quarterback,” Clifford Story said.  “I told him I can only take him so far. We’re going to put him in the best position possible so he can have an opportunity to play it at the SEC level.”

Clifford Story confirmed that Kristian Story will attend the Manning Passing Academy this summer to further hone his skills.

The Volunteers were the fourth SEC program to offer Kristian Story when they did so in January. Tennessee joined Alabama, Georgia and Mississippi State. Louisville and Jacksonville State also have extended offers.

Kristian Story’s commitment to Tennessee is non-binding, and he said his recruitment will remain open. A number of schools are likely to express interest as he dives deeper into his high school career.

Last year was his first as a starting quarterback.

“I think he’ll still remain open to other schools, but right now, [Tennessee] is where his heart is,” Clifford Story said. “That’s what he feels like is the perfect fit for him.”

Kristian Story is not the only Lanett player attracting college attention. Rising seniors Trikweze Bridges and Dee Dobbs also have drawn the eyes of recruiters.

Bridges, a consensus four-star safety, holds offers from 20 FBS programs. Since the start of the year, he has been offered by Tennessee, Middle Tennessee State, Oregon, Florida State, Louisiana State, Ohio State and Ole Miss.

Recently, he has visited potential landing spots. Bridges attended Tennessee’s Junior Day with the Story’s in early March, traveled to Oregon in mid-March and trekked to Florida State last weekend. The visits to Oregon and Florida State were both unofficial.

Clifford Story said that Bridges plans to release his top five schools in the near future. Then, he’ll begin making his official visits.

“It’ll be soon, I can assure of you that,” Story said of the top five reveal.

Bridges played both ways for the Panthers last season, splitting time at safety and wide receiver. On defense, he recorded 98 tackles, including 12 for loss, recorded nine interceptions and broke up 19 passes. On offense, he caught 32 passes for nearly 800 yards and nine touchdowns.

Dobbs also has gained recruiting traction. He recently received an offer from Alabama A&M and is visiting the University of Kentucky this weekend.

“Everything is really starting to pick up for him,” Clifford Story said. “In the beginning, Dee Dobbs was just a guy that played football, didn’t love it. But over the last year and a half, he fell in love with football. That’s his number one thing now, so schools are really interested in him.”

Dobbs, who is 6-7, spent most of his time last fall at outside linebacker. He totaled 67 tackles, two sacks, six interceptions, and six pass breakups.