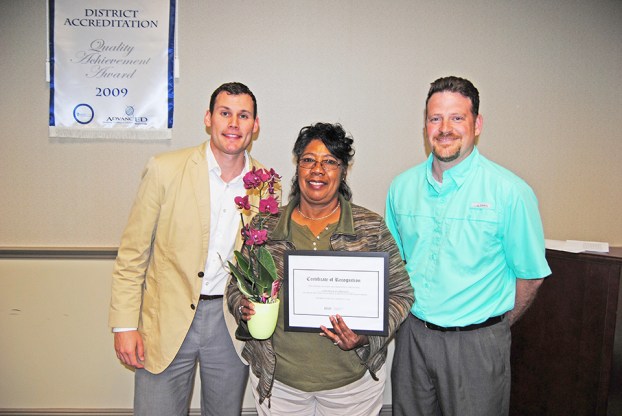 A LaFayette resident, Presley now advances to the Alabama Substitute Teacher of the Year category. If she wins at that level she will receive $1,500 for herself and another $1,500 for the school district.

For several years now, Kelly Services has been hiring the substitute teachers for Chambers County.

Landis and Manderson said they have gotten many good reports on the job Presley does in the classroom.

“She’s here almost every day,” said Superintendent Dr. Kelli Hodge. “She works where she is needed, and she is called on a lot.”

Presley received a round of applause from the board and school personnel present at the meeting as she was presented the award along with some roses.

In other business, Dr. Hodge announced that spring break would be taking place the week of March 26-30. School offices will be open Monday and Tuesday of the week but everything else is closed.

“Everything will be back to normal the next week,” she said, adding that she hoped everyone would have an enjoyable, but safe, week.

Dr. Hodge said that this year’s pre-k drawing would be done in a random selection process.

“We’ll use technology to make the selections,” she said.

Pre-k is an immensely popular program. The problem is that there are more applicants than available slots. For the coming school year there are 140 children signed up, but only 92 available places. Those who aren’t selected in the random procedure will go on a waiting list.

“Before I leave this earth, I want to see a state legislature that will fully fund pre-k,” said Board Member Judy LaFollette.

Dr. Hodge said that something needed to be done to change the windows at LaFayette Lanier Elementary School in Valley.

“It has to be done for the safety of the students and for us to save on power bills,” she said.

Architectural firm McKee & Associates is working on a new design. They will need to complete it before drawings can be presented to the Valley Historic Preservation Commission.

Built in 1935, the school is on the city’s list of historic buildings. The VHPC has a voice in any changes that are made, but a final decision will be up to the school board.

The monthly financial statement shows that sales tax is continuing to hold steady. This helps with school revenue. Recent start up businesses such as Norbord and the solar farm help in this as well.

The board approved a number of upcoming field trips that are either overnight or out of state. They include an April 6 trip to Emory University in Atlanta by the Valley High Art Guild to see a special exhibit of ancient Egyptian, Greek and Roman art, a June 5-8 trip by the Career Technical Center FFA students to Montgomery to attend the state convention, a May 3rd trip by W.F. Burns Middle School students to CCN News Center in Atlanta to see how news is gathered and presented, an April 27th trip to Six Flags Over Georgia by VHS Science Club members to participate in Education Day, a May 3-6 trip by the LaFayette High track team to participate in the state meet at Cullman, Ala. and an April 19th trip to Atlanta by CTC Health Occupation students to see “Bodies: an Exhibition.”

Dr. Hodge said the Bodies exhibit would be very good for anyone in anyone interested in a health-related field. There’s a series of life-like manikins that have different cross sections of the human body.

“It could gross you out if you don’t like to see, veins, organs and bones,” she said.