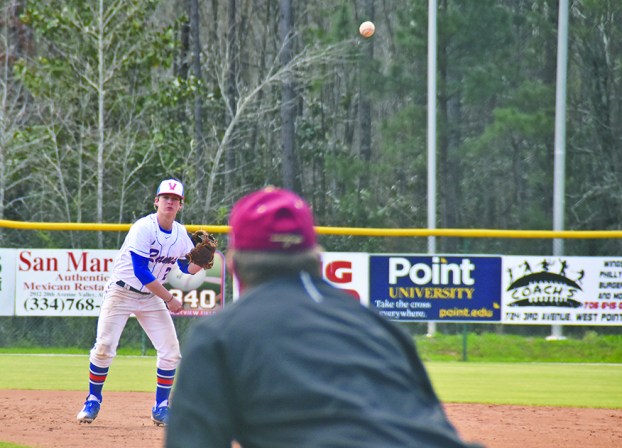 VALLEY — The Valley High School baseball team kept it close on Saturday against Russell County, the state’s top-ranked squad in Class 6A.

But the Rams ultimately could not hold pace in a 4-0 loss at Crestview Field. A few defensive mistakes proved costly.

Russell County plated its first run in the third inning on a fielding error. With runners on first and second base — due to a hit batter and a walk— Logan Austin laced a hard ground ball to Valley shortstop Andrue Davis.

Davis corralled the ball on the run and zipped a throw to first baseman Sam Henderson. But it skidded low and wide, allowing a run to score.

It was one of four errors Valley committed in the game.

“We’ve been struggling defensively,” Shivers said. “We’ve just been making too many errors in games to compete.”

The Warriors capitalized on another opportunity in the fifth inning. After starting the frame with two walks, Valley pitcher Will Kennedy surrendered back-to-back RBI singles.

Russell County plated its final run on a sacrifice groundout.

The Rams, meanwhile, had no answer offensively.

Warriors starting pitcher Zack Henderson gave up only four hits en route to a complete-game shutout. Tyler Lott accounted for half of Valley’s production, going 2 for 3 at the plate.

In addition to Lott, Josh Bledsoe stood out for the Rams. The senior pitcher-infielder returned from an injury that had sidelined him for two and a half weeks. He fanned three batters and did not surrender a hit over the final two innings.

“That’s a bright spot that we have a guy back, a guy that’s healthy,” Shivers said. “Without him, we have a hole somewhere on the infield. It’s either catching or third or first, because he plays all three of those positions.”

Shivers said he is hopeful that Bledsoe’s reemergence, coupled with a reduction in defensive miscues, will help his team break out of its recent slump. Valley’s loss to Russell County was its fifth straight.

The silver lining is that each defeat came against an esteemed opponent, three of which compete in a classification above Valley.

“I’m proud of the way the guys have been battling, even losing four or five games in a row,” Shivers said. “Maybe some teams are going to count us out a little bit and think we’re not a good ball club. But I think we are. If we play good ball, I think we’re a good team.”

Valley (8-10) is competing this week at the Lake Martin Classic. The Rams fell to Sylacauga on Monday, 6-1, in their opening game. They will play John Carroll Catholic and Chelsea on Tuesday before wrapping up their tournament slate on Wednesday against Jemison.