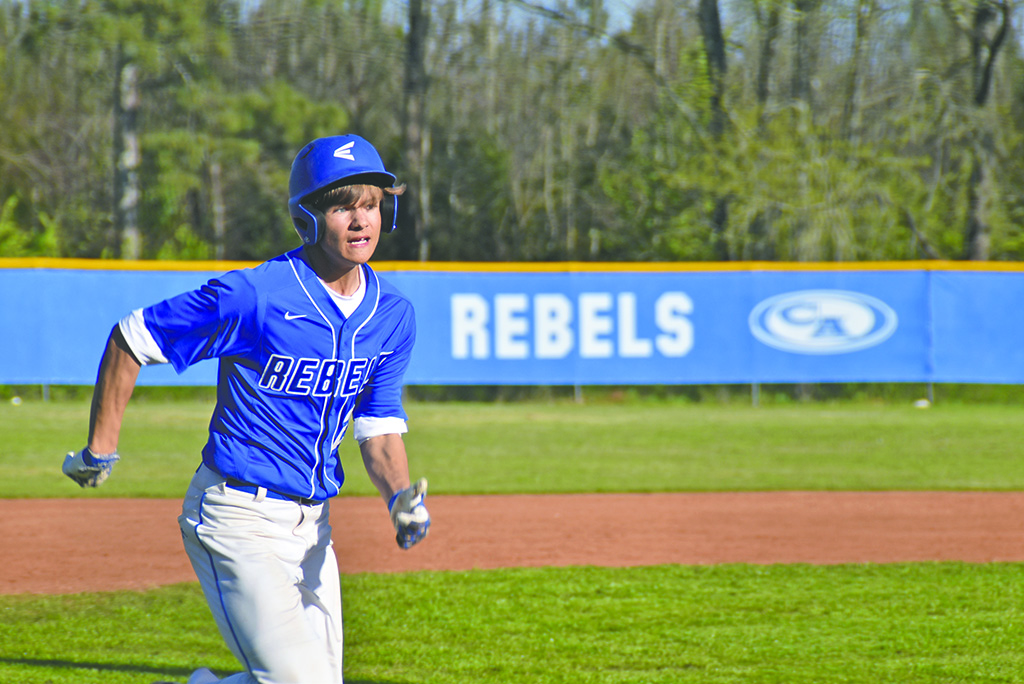 Chambers Academy’s Brody Smoot dashes toward home plate in the sixth inning of Thursday’s game against Springwood School. The Rebels used a late surge to secure a 9-6 victory. (Photo by Sam Chandler)

LaFAYETTE — The Chambers Academy baseball team has struggled in close games this season. Many times, the Rebels have not been able to plate runs in clutch moments.

Head coach Dillon NesSmith feared that trend would continue on Thursday. His team trailed rival Springwood School by a run in the fifth inning, and it hadn’t found much success in placing runners on base.

“When we came out today, I thought, ‘Here goes the same old thing. We’re playing great defense, give up an early run, and then we’re not going to be able to come back from it,” NesSmith said.

But his team delivered.

Chambers Academy erupted for nine runs in the fifth and sixth innings to secure a 9-6 home victory. The Rebels trailed 1-0 heading into the bottom of the fifth.

White, a senior, helped keep his team in contention while it searched for an offensive spark. The right-hander surrendered only one run in the first six innings. Springwood’s Dylan Anderson laced an RBI double in the top of the first that scored Preston Messer.

White didn’t allow another run to cross home plate until the top of the seventh, which the Rebels entered with a 9-1 lead. He finished with five strikeouts in a complete-game performance.

“Whenever you get the run support that you need, it’s just relaxing,” White said. “That’s a great thing for a pitcher.”

Chambers Academy notched three runs in the fifth inning, thanks to a Springwood error and a pair of sacrifice flies from Jordan Gillespie and White.

The Rebels shifted to another gear one frame later. Blake Sheppard, Payton Allen, Gillespie and White all drove in RBIs as the Rebels batted through the order.

“Once somebody gets on base, it’s just contagious,” NesSmith said. “It gets everything rolling, it gets the dugout pumped up. It’s so much fun.”

Springwood made a late charge in the top of the seventh to trim the deficit.

Anderson, who went 2 for 4 with four RBIs, belted a three-run home run over the left field fence.

But it wasn’t enough to alter the outcome. After the shot, White settled down and fanned the final batter.

“Today was the most complete game that we’ve played all year long, bar none,” NesSmith said. “I was so proud of these guys today.”

Chambers Academy (7-8) will attempt to sustain its mojo on Friday when it travels to Lee-Scott Academy. Springwood (5-12) on Friday will aim to snap a five-game losing streak at Flint River (Ga.).