Ribbon cut at AL Solar A project in LaFayette 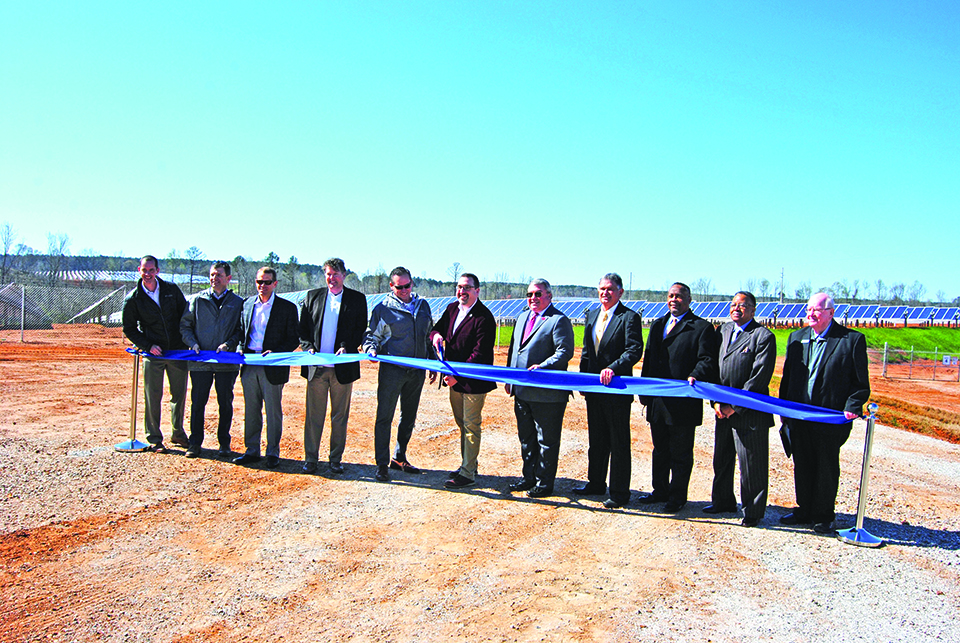 LaFAYETTE – Community and business leaders, as well as representatives from Walmart, Alabama Power and Clenera, gathered at the new 72-megawatt AL Solar A project in east Alabama today to celebrate its successful launch and operation. AL Solar A, one of Alabama’s largest solar facilities, is owned by Houston-based Centaurus Renewable Energy.

Most of the Renewable Energy Certificates (RECs) generated by the facility will serve Walmart through a long-term contract to help the retailer meet its renewable energy goals. Alabama Power is marketing the remaining energy and renewable energy attributes to other customers and third parties interested in supporting new renewable generation.

Alabama Power has a long-term power-purchase agreement with Centaurus Renewable Energy to receive all the energy and environmental attributes from the AL Solar A project, which it can then use for its own customers or resell to others, as in the contract with Walmart. Community and business leaders celebrate the successful launch of the AL Solar A facility 2 The long-term contract with Walmart also protects other Alabama Power customers from bearing additional costs in connection with the new solar facility. The combination of the purchase agreement and the Walmart contract is designed to provide a net benefit for all customers.

“Walmart is important to our state and our state’s economy, as well as an important partner of Alabama Power,” said Jim Heilbron, senior vice president and senior production officer for Alabama Power. “We are thrilled that this project is now serving Walmart with renewable energy that helps it meet its sustainability goals, all so it can continue to grow and prosper in the state. AL Solar A’s ongoing support of the local economy in Chambers County is also a win.”

Construction of the $140 million facility began in February 2017 and was fully operational by the end of last year. The project created more than 450 jobs during construction, and the facility’s permanent employees were hired locally from Lafayette. The facility sits on 1,100 acres and is made up of more than 338,000 solar panels that automatically track the sun for optimum efficiency.

“At Clenera we believe in supporting local communities and are committed to providing clean energy at the lowest possible cost to consumers and businesses throughout the country,” said Michael Gallego, vice president of Operations for Clenera. “We appreciate the support of the AL Solar A project by Alabama Power, as well as the local suppliers, vendors, businesses and industries in Alabama who have been exceptional to work with.”

AL Solar A was the third solar project connected to Alabama Power to begin operating in 2017. Earlier in the year, company-owned solar facilities were unveiled at Anniston Army Depot and Fort Rucker. The company also has rights to the generation from two wind farms in the Midwest and markets the renewable energy attributes, including RECs, from all these projects to interested parties for the benefit of customers. Alabama Power also produces clean, renewable hydro power at 14 hydroelectric facilities on the Coosa, Tallapoosa and Black Warrior rivers.