Security a high priority with schools 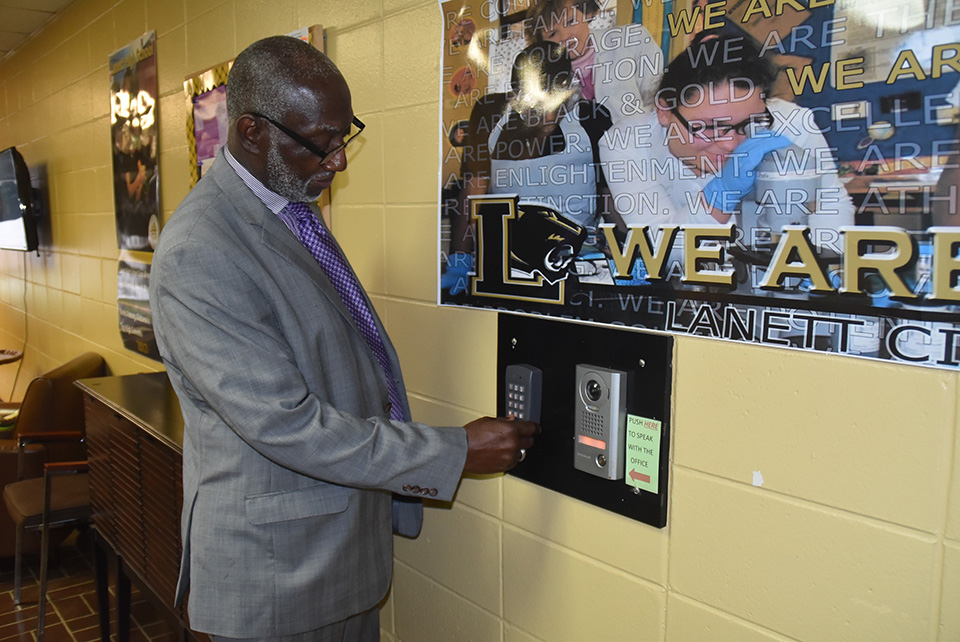 Steven Thomas | Times-News Being Safe: Principal Jamie Heard types in his passcode to get through the security vestibule at W.O. Lance Elementary School.

If you ever find yourself walking through the main entrance at any of the Lanett City Schools, you won’t get very far.

Each of the main entrances has a secured vestibule that everyone, including principals and superintendents, must be allowed to enter.

While this is one of the most visual measures, it isn’t the only way that Lanett and all area schools are working to keep the students and faculty safe in case of an emergency.

Other measures implemented include keeping a School Resource Officer on hand and training for both students and faculty.

It was just over two weeks ago that a gunman opened fire on students at Stoneman Douglas High School in Parkland, Fla., becoming only the most recent in a long line of school shootings.

Since then, debate has raged over the best response to prevent further violence, from arming teachers to banning assault-style weapons.

However, on a local level the ideas tend to be a little different, skewing more towards training and securing areas than anything else.

Phillip Johnson, Superintendent for the Lanett City Schools System, said their security measures have been in place for several years now, since the 2012 Sandy Hook Elementary School shooting.

“After Sandy Hook we created the vestibules, not to keep guests out, but to secure the school,” he said.

Anyone entering the school is stopped by a glass wall and must press a call button to request entrance. Once given, they can proceed to the office.

Johnson noted that everyone has to follow this, including officials, and office workers are trained not to let anyone in, even if the person asking is under duress.

That last fact is part of the training that has been implemented. This sentiment is shared by others in the education profession, including Yolanda Stephen, the director of public relations for the Troup County School System.

Each school, she said, has a safety plan in place that is specially tailored to the school. The middle and high schools also have an resource officer that also visits the elementary school when asked.

Stephen added Troup has also implemented the secure, glass entrance at some of their schools and have even upgraded the cameras on site.

“We’ve looked at a number of things,” she said. “After an event you look at what could have been done better.”

Chambers County Schools has implemented an unique plan, they have a safety liaison on each campus and use an alert system with three levels of awareness, according to Safety Coordinator and Assistant Principal Casey Chambley.

“We implemented this plan two years ago,” Chambley said, adding that safety liaisons meet every one to three months to review their processes.

On the alert system, there are three levels: yellow, heightened; orange, secure your area; and red, immediate danger.

Chambley added that each level has distinct expectations with yellow meaning to be more alert of your surroundings and orange, while meaning to secure the area, does not mean class itself should end.

“It does not mean lockdown,” he said.

Red was the only level to actually denote danger  but, he noted, the school has not gone to red alert since the system was put in place.

Chambley said the system is also set up so that any teacher or administrator can send out alert using their phones as opposed to having to travel to the front office first.

Despite all the security measures in place across the Valley-area school systems, the one measure that has not been actively discussed is that of arming teachers.

This debate was reignited across the country following remarks made by President Trump in the wake of the Parkland incident. The president also suggested giving bonuses to any teacher willing to undergo firearms training and be so armed during school hours.

Pros and cons surrounding this plan have been heavily debated, from how expensive this idea would be to whether having more armed officers on site would be just as efficient.

Superintendent Johnson said resources would be better handled if put toward arming and training officers over teachers.

“Teachers are there to teach,” he said.

Chambley and Stephen both noted that their systems have not considered the issue but said it would be up to the legislature.

The idea of arming teachers can be traced to before Parkland, Sandy Hook and even Columbine, when in 1997 Pearl (Mississippi) High School assistant principal Joel Myrick stopped 16-year-old Luke Woodham’s shooting spree.

After the rampage began, Myrick went to his personal vehicle and retrieved a Colt .45 pistol and confronted Woodham, who stopped shooting and tried to retreat but was further impaired by Myrick until police arrived.

In a recent New York Times interview, Myrick said he was against arming school faculty members because “teachers have to teach.”

Instead, he advocates having trained personnel, possibly retired law enforcement officers, on site.