St. Paddy’s on the River has popular inaugural day 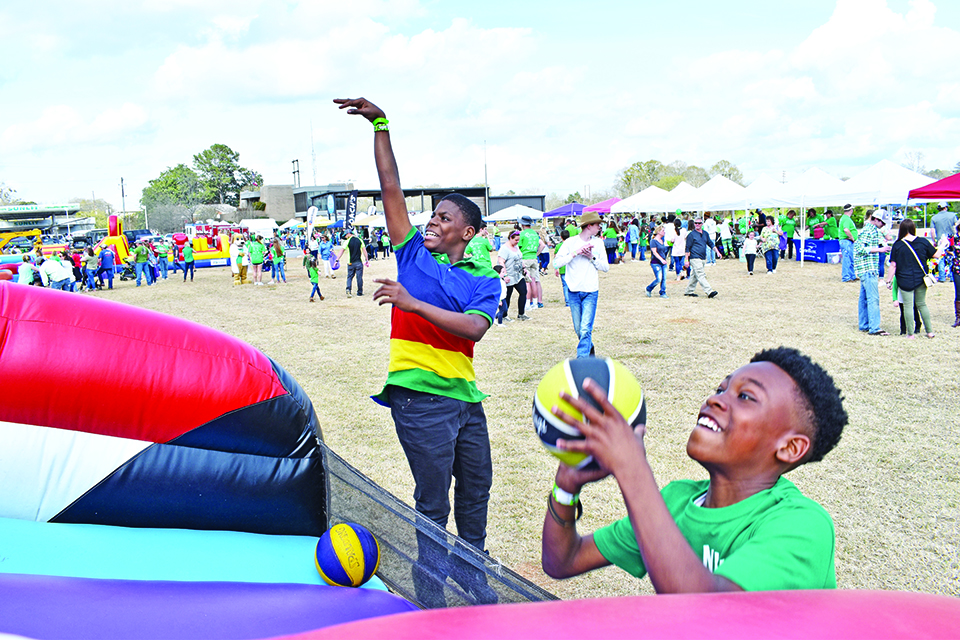 Photos by Steven Thomas | Times-News St. Paddy’s: ABOVE: Makhai Auguste and Terence Brown toss basketballs into the hoops of an inflatable court. BELOW: Brandon Rogers and Bo Colley show off their green-bottled beers.

WEST POINT — For a first time event, St. Paddy’s on the River was a rousing success, according the Chamber of Commerce executive director Ashley Crane.

“Overall it was a wonderful success,” she said. “We polled attendees and they said they enjoyed it and we looking forward to next year. There were no complaints and a lot of suggestions.”

Crane said that considering this was the first year of the event, it was a great success with an estimated 2,000 people in attendance throughout the day.

Many things can account for the high turnout, including good vendors, good weather and good food.

One of the most popular things there was the face painting.

Crane noted that artist Cindy Smith donated her time and materials to the event.

“At one time she had an almost hour and a half wait,” she said. “She also stayed there past her intended end time.”

The various food vendors also had a good day.

Vendors like Pokey’s sold out of all they brought but Crane pointed to Mary’s Grilled Chicken Wraps as one of the most popular items.

“Our hope was to hold an event that everyone benefited from and get a return on their investment,” Crane said. “We succeeded beyond expectations.”

A highlight of the event were the Michelob Ultras and Bud Light beers sold in decrative green bottles and provided by a partnership of Coach’s Bar & Grill and LaGrange Grocery Company.

“People liked the beer, “ Crane said. “We sold out of the Michelob’s and only a few of the Bud Lights were left.”

The Blane Rudd and Tim Dugger concerts were also a success with the performers providing a variety of songs for attendees.

Despite the success of Saturday’s event, Crane is hesitant to say for sure whether this will be a yearly event.

“It’s a little early to say but we would like to do it again,” she said. “Anytime you hold an event, you look back and try to make improvements. We would like to see more local artists and bring exposure to the community.”

Crane added that any future events would definitely be expanded and made bigger and better but this year they wanted to keep it small.

“We wanted to make sure we could handle it,” she said.

Overall, it was a good day and hopes are high for the future.

“We appreciate the community coming out and supporting us,” Crane said. “We can only continue with that support.”

The idea to hold the event came after the closing of the Irish Bred Pub in downtown West Point last year. The restaurant held an annual street event for St. Patrick’s Day but that stopped after they closed.