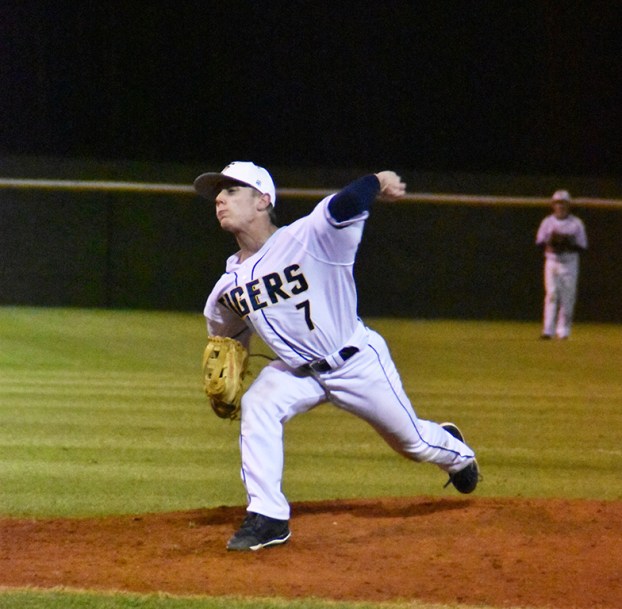 One trip through the lineup is typically Brantly Robinson’s threshold.

But the senior southpaw surpassed that mark on a cool evening at Tiger Field. He surrendered only three hits over five frames, propelling Troup to a 5-3 victory over Northside.

“Every inning it seemed like the innings got shorter with the amount of hits they had,” Robinson said. “I didn’t even feel like I was throwing that much, and I never got tired of it.”

Robinson entered Monday’s start with a simple mentality. He wanted to throw strikes, avoid walks and let his defense do the rest.

The Tigers had his back.

Bolstered by plays like the full-extension catch made in foul territory by left fielder Cade Garner, Troup limited Northside to only two runs during Robinson’s stint on the hill.

He exited after throwing 64 pitches, recording two strikeouts and giving up one walk.

“He was pretty stellar through the first three, four innings,” Craig Garner said, “so we just kept running him out there until he was going to get in trouble or meet his pitch count.”

Robinson’s teammates provided him ample run support while he remained in the game.

The Tigers took a 2-0 lead in the bottom of the first inning on a steal of home by Ryan Bliss and a sacrifice fly from Kenly Bridwell.

Bridwell’s flyout scored Colby Williams, who reached base on a single.

“Seventy-five percent of the time the team that scores first wins the ball game,” Craig Garner said, “so any time we can try to manufacture a run in the first inning, that’s what we’re going to do.”

Troup added to its lead in the fourth.

Bridwell and Garrett Casey drew walks to begin the inning, and Bridwell crossed home plate on an error committed by Northside when attempting to field a sacrifice bunt from Cooper Doughman.

Casey scored a couple batters later on a passed ball to make it 4-0.

But the Tigers tacked on an insurance run after Bridwell scored on a wild pitch in the bottom of the inning.

Bliss entered to pitch in the sixth.

Quickly, he ran into trouble.

Northside loaded the bases with one out thanks to a hit and multiple Troup fielding errors. But Bliss surrendered only a single run and escaped the jam.

“He’s experienced enough and been in big games enough where that didn’t faze him,” Craig Garner said. “They could have made five errors behind him, and it wouldn’t have fazed him. He’s going to do what he can do to the best of his ability.”

Williams pitched the final inning to earn the save.

With the win, Troup improved to 7-1 on the season.

The Tigers will return to action on Thursday at Loganville. First pitch is scheduled for 8:30 p.m.