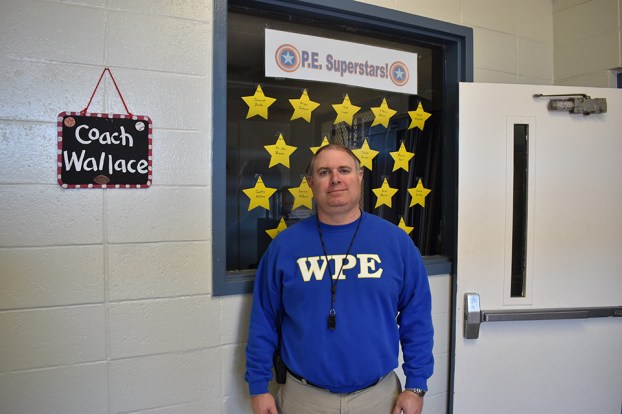 WEST POINT — West Point Elementary has been the home to Bryan Wallace, the physical education teacher, for the past 18 years and he doesn’t plan on leaving anytime soon.

“Well you know I think about leaving some times but then I’ve got it made here,” he said.

The interest in teaching Wallace has was first sparked by his brother, who was also a PE teacher.

“I came back from college and observed him and I loved sports growing up,” Wallace said. “It was just the natural fit.”

Those 18 years at the school have been great, he said, and much has changed in that time.

One constant has been the students, many of whom went on to have kids that Wallace is now teaching.

“That means you’ve been here too long,” he said with a laugh. “It’s funny to see the ones you’ve already taught, then their kids come along and they act the same.”

Wallace’s time had been productive and he has brought much to the program, including a sense of pride that he is happy to share with his students.

On the day of the interview, Wallace was running student through drills as part of a fitness challenge. Periodically he would shout out encouragements to students that looked like they might fall behind.

“We’re working hard on our fitness scores,” he said. “We talk about our goals daily and most are already past that. I try to keep them going and getting better.”

Wallace added that he enjoys seeing the kids grow and realize they can get better.

Going forward he plans to go as long as he can as well as adding new activities.

“We’ve just added a basketball team and a track team,” he said. “We have track event coming up that we are practicing for. I’m excited to see the kids playing for the school.”

He also enjoys his home life, with his wife, Heather, also a teacher, and their three kids, whose ages range from 14- to 11- to 5- years-old

Wallace noted that he has not taught his kids, who attend other schools but he has his reasons.

“I want them to have their own identity, not just the coach’s kids,” he said, adding he also golfs with a group when not teaching. “We’re just a bunch of has been’s that like to reminisce about the glory days.”