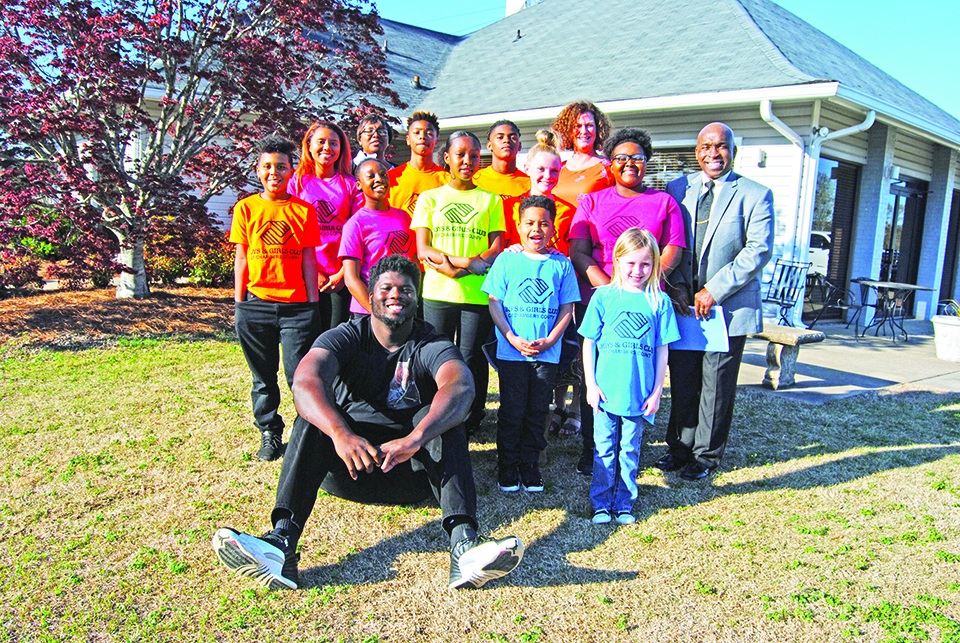 Wayne Clark | Times-News GIVING BACK TO HIS FAVORITE CLUB: Jylan Ware (in front) loved being a member of the Chambers County Boys & Girls Club when he was growing up in the Valley some ten years ago now. He’s now a six-foot-nine, 300 pound offensive lineman with the NFL’s Oakland Raiders. On Thursday, Ware was the keynote speaker at a fundraising dinner for the local Boys & Girls Club. Current members of the club with Ware (above) include, at right, Emmanuel Magby and Adyson Morgan. Row 2: Tilyn Carrell, Shakeriana Paige, Kimora Johnson, Whitleigh Bright and Ambreonia Garner. Row 3: Tapanga Perkins, Site Director Kim Dozier, Ian Crim-Davis, Andrikous Little, Dr. Kelli Hodge and Jerome Bailey.

VALLEY — Current Oakland Raider Jylan Ware told an overflow crowd Thursday that he’s “about as Valley as you can get.”

Very few people are in their early twenties and on a multi-year NFL contract, but Ware is one of them. He was the keynote speaker at the inaugural Great Futures Start Here fundraiser dinner for the Chambers County Boys & Girls Club.

“I grew up in the Langdale Club,” he said. “I spent many hours there. I feel blessed to be where I am today. Once in a blue moon it happens to someone to make it in the NFL. A child who is a blank slate can grow up big.”

Ware said that he enjoys giving back whenever he can. On Super Bowl weekend he bought two high-priced Super Bowl tickets and auctioned them off with the money going to cancer research.

Less than a year ago he got a phone call that changed his life.

“It was on April 29th,” he said. “It was from the Oakland Raiders. They told me they had enjoyed visiting me and that they were going to draft me in the seventh round. I will never forget that day. When something like that happens to you, you can’t help but appreciate all the people who helped you along the way.”

Ware said the Boys & Girls Club would always be close to his heart.

“Four of the five best friends I ever had I met them in the Boys & Girls Club,” he said. “I just want to say thank you to everyone with the club.”

Noting that there had been three $1,000 donations to the club, one each from Southern Union State Community College, Point Broadband and J. Smith Lanier & Company, Ware said that he would match each one of them, making it $6,000 between four parties.

The comment drew thunderous applause and a standing ovation from the big crowd gathered inside the Point University Golf Club and Events Center.

“We definitely weren’t expecting that,” said Chambers County Superintendent of Education Dr. Kelli Hodge, a strong supporter of the local B&G Club. She kiddingly added that “Next time we’ll try to have five.”

Dr. Hodge said that she was especially proud that Ware was continuing to work on his degree from Alabama State and will graduate soon.

Dr. Hodge said the club had come a long way in the last five or six years. There was a time when some thought was being given to closing it.

“We did hit a few bumps in the road back in 2013,” said Site Director Kim Dozier. “At one point our daily average was around 40 kids. We merged with the West Georgia Boys & Girls Club in 2015. Bart McFadden and the West Georgia Club helped get us back on our feet. Our average daily attendance started climbing. Our numbers very quickly doubled to 80. We started getting our grants back on track and in 2017 our attendance was between 97 and 125 kids every day at the Langdale site. This past summer we had almost 150 kids.”

Jerome Bailey said the club was lucky to have Dr. Hodge.

“She supports us with meals, transportation and anything in her power to make this a better program and easier access to all the children of Chambers County, including children from the Lanett City School System,” he said. “Our Point University students who come out regularly are so invaluable to us and bring so much hope for the future of this program through their participation and their inherent civic duty to make a positive
impact on these kids’ lives and our community in general.”

“Let’s never forget that our children are this community’s future,” Bailey said. “The only way to ensure their individual roads to success are guaranteed is to commit ourselves, our time and our resources each year, raising the bar as high as we can each year, and providing more and more learning opportunities for every child in Chambers County.”

Bailey said that the goal of the Chambers County Boys & Girls Club was to provide a place where positive change is inevitable and to have new programs that other Boys & Girls Clubs will want to try. “We want to show our peers what is possible when the whole community gets involved,” he said.